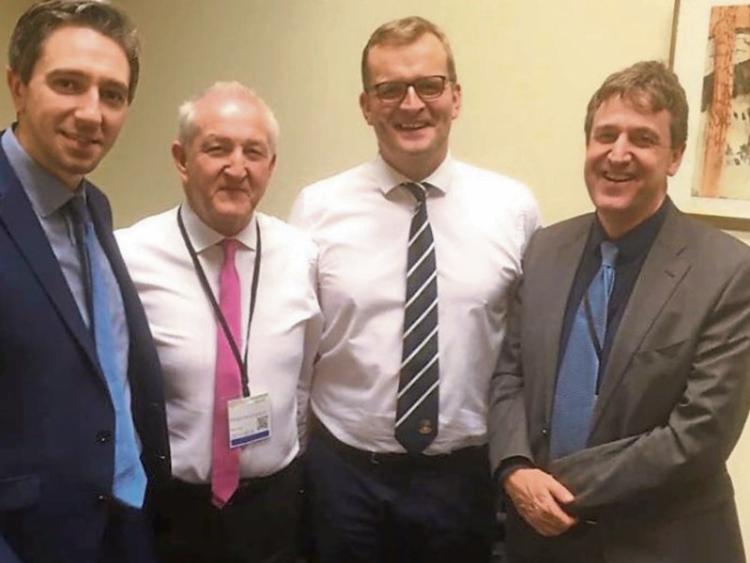 Tipperary stroke survivor, Martin Quinn, has called on the Minister for Health, Simon Harris to provide funding for the reintroduction of a FAST nationwide promotional campaign.

Mr. Quinn made the call when he met the Minister in Leinster House on November 20 in a meeting which was facilitated by Minister of State, John Paul Phelan to discuss improvements required in the provision of services for stroke survivors and their families.

The meeting, which was at the request of Martin Quinn, was attended by both Minister Harris and Phelan, along with Chris Macey of the Irish Heart Foundation and Dr. Rónán Collins, Director of Stroke Services at Tallaght University Hospital. The meeting was also attended by Jackie Cahill, T.D.

Speaking directly to Minister Harris, Martin made an emotional plea for the reintroduction of the FAST campaign.

"As a stroke survivor I know very well the very serious implications of not getting immediate attention when stroke strikes. I ask you please Minister to find the funding required for a nationwide campaign so that people are aware of what to look out for as signs of stroke.

“It is a campaign that can be very effective as demonstrated in previous promotions and also internationally, where its success is evidential. A nationwide FAST promotional campaign can and will save lives and I know that Dr. Collins and Chris agree with me on the urgent need to have this reintroduced and relaunched".

Martin Quinn suffered a stroke in 2013 when he was being interviewed by telephone 'live' on his local radio station. It was the following day before he got to hospital and so valuable time was lost which would have greatly assisted in his recovery and he is therefore passionate about the need to create greater awareness of the signs of stroke and of the huge importance of getting a person to hospital straight away.

Martin also raised the issue of the Early Supported Discharge Programme which wasn't funded under the Sláintecare plan. This programme is about moving people out of hospital after initial care and assessment and getting them their therapy for the first 6-8 weeks at home. Chris Macey of the Irish Heart Foundation told the Minister that its been proved in many countries around Europe that this programme improves outcomes and actually reduces overall costs for the health service as well.

Dr. Collins spoke of the need for support for Community Rehabilitation and Support Services saying that there are huge service deficits and that people feel abandoned at the hospital gates resulting in a big increase in stroke survivors returning home with no extra investment in services. The need for the completion of the National Stroke Strategy was also deemed a priority by Dr. Colins.

Martin also took the opportunity to ask the Minister to support the establishment of a Stroke Support Group in association with the Irish Heart Foundation and the HSE for Tipperary.

"I am aware of the success of similar groups throughout the country and I would like to see this replicated for Tipperary. Stroke Support Groups play a vital role for survivors and their families after stroke. Survivors often speak of feeling abandoned after hospital care has ended with little or no social integration.

“The experience of other groups shows that support groups provide an important lifeline to people to assist them in coping with communication difficulties, social relationships, lack of activity and loneliness. I am hoping Minister that you can provide funding for the establishment of such a group in Tipperary".

The Minister listened with great interest to the presentations and promised to revert on the issues raised without delay.

Days after the meeting Martin Quinn and Chris Macey travelled to Portugal to attend the Stroke Alliance for Europe Working Conference and General Assembly which was held in Porto. The Conference focussed on issues including Wellbeing after stroke, Women and stroke, Rehabilitation and life after stroke and the implementation of the Stroke Action Plan for Europe.