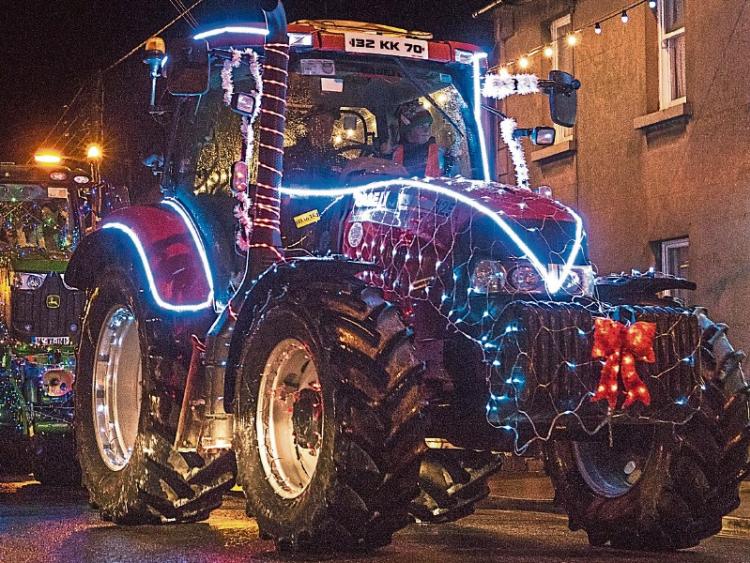 Thousands of people will flock to Carrick-on-Suir this Saturday to watch the town's seventh annual Christmas parade of fairy light festooned tractors, which the organisers hope will set another world record.

Forty tractors decorated with more than 100,000 lights are signed up to take part in the parade and there will also be a junior parade of 50 children pedalling toy tractors.

Parade organiser Ciara Power said they are hoping to break once again the world record for the most  illuminated convoy which the pagaent broke a few years ago.

She told The Nationalist they were praying for good weather on Saturday evening so the event can be an enjoyable experience for everyone.

Tractors and their drivers from as far as Cork, Clare and Limerick will be joining local based participants from counties Tipperary, Waterford and Kilkenny in the parade, which has a new starting point this year.

The fleet of dazzling tractors will start their journey on the Pill Road opposite the Sean Kelly Sports Centre at 6pm on Saturday.  Santa and Mrs Claus will be special guests on one of the leading tractors.

There will a range of  Christmas stalls, amusements and a Santa's grotto for children at New Street Car Park. The festivities will begin there at 3.30pm to get everyone in the mood. Visitors will be able to see the tractors up close and meeting the drivers. The St Vincent de Paul Society will have a toy drop off stand where people can donate toys for their Christmas appeal.

The junior tractors parade will begin at the Main Street Car park opposite the Carraig Hotel , travel out the West Gate, turn back across the top of Pearse Square, down by OK Cycle & Sports, turn up New Street & into the New Street Car park before the arrival of the main parade.

The event, organised by the Crop Cruisers tractor drivers and supported by Carrick-on-Suir Business  Association, has grown to become one of Carrick-on-Suir's biggest tourist attractions.

The Crop Cruisers will be raising funds during the parade for Carrick on Suir Meals Assistance Service and  Greenhill Day Care Centre.

COSBA advises motorists there will be some unavoidable traffic delays in Carrick-on-Suir between 6 to 7 pm on Saturday while the parade is taking place.

“We ask that everybody comply with the traffic management plan in place and follow the instructions of the stewards and an Garda Siochana,” said a COSBA spokesperson.