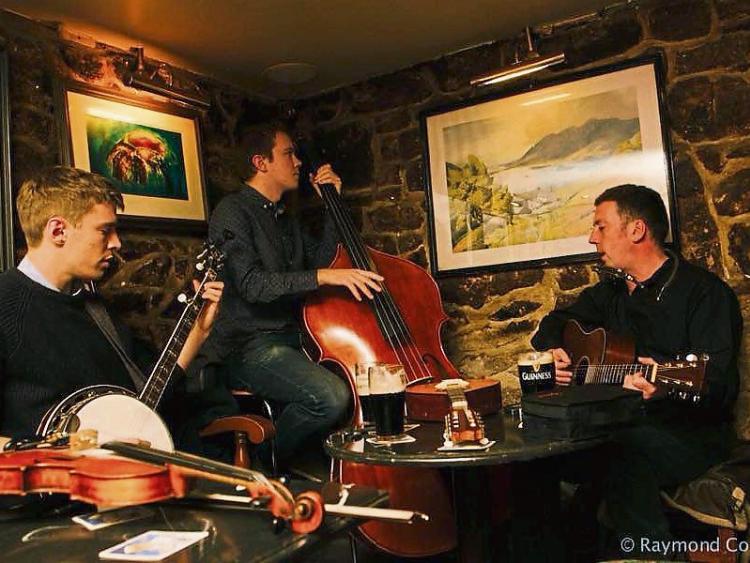 Roscrea Heritage Society will present an evening of heritage and music in the Damer House Annex on Friday, February 7, at 8pm.

The evening will feature music from the Blue Light Smugglers, a Dublin-based group which includes Roscrea native, Terence Cosgrave. Terence has strong connections with the Heritage Centre, having rehearsed with his first band in Damer House in the 1980s.

Dr Matthew Stout (who played bass in that band) will return to Roscrea to give a presentation on the night. Dr Stout, one of Ireland’s leading cartographers and historians, will present a lecture Music in the Rural Irish Landscape. Matthew, and his wife Geraldine, lived in the Heritage Centre in the 1980s and ran several successful training programmes there, one which included a survey of the Barony of Ikerrin, which was subsequently published in book form. Their home was also the rehearsal space for 1980s Roscrea rock band Ego Leads - who also played their first gig there.

The Blue Light Smugglers are an acoustic harmony group that play bluegrass, country music, blues and Americana music, and have been together for four years. The band, in their adopted Barnaculia home in the Dublin Mountains, are a song, a mood, a thumping of the heart to double bass, a melody that plays inside your head. The Blue Light Smugglers are the primitive baying around the ancient fire, the half-remembered melodies and heartbreaks, the small gatherings of music before there were recordings, before the ‘Record’.

They set up home in the Blue Light Pub in Sandyford in Dublin, from which they derive their name, and where they continue to play a weekly residency. Their plan was to play music acoustically. There was to be no amplifiers, no microphones - nothing but a small room, voices, instruments - and musical visitors to add a little spice. Somehow, they hoped people would listen – and since then people having been visiting them on Monday nights from all over Ireland and abroad.

In June 2019, the band released an album of original material - ‘Record’ - and have played gigs all over the country. The group consists of Terence Cosgrave on guitar, Mayo-man Niall Hughes on double-bass and Roscommon native Luke Coffey on banjo. They headlined the Dunmore East Bluegrass festival last year and they have played together for over four years.

The album ‘Record’ is a collection of 10 original songs, all written by Terence, plus a cover of the Tom T. Hall classic ‘That’s how I got to Memphis’. It is available for download on their website thebluelightsmugglers.com

“It wasn’t a case of going to the Bahamas and spending six months on it! We recorded the album over two nights in Luke’s workspace in Clondalkin,” says Terence. “He happens to work for an acoustic tile company and his boss’s office was soundproofed, so we did it live and hoped for the best. But it’s out there now, and that’s way better than it just being in my head.”

The band describes the music they play as ‘American Traditional’. “We play a lot of different styles and genres,” but the consistent element, if there is one, is that it’s American music, usually rural music, that is over 50 years old. We do songs by Bobby Bare, Tom T. Hall and Willie Nelson, we also do a Bing Crosby song and we’ve done stuff by artists as diverse as the Allman Brothers and John Prine.”

The point about ‘rural’ music is apt as it will form the subject matter of the lecture by Dr Stout. Is there such a thing as ‘rural’ music, and if so, how is it different from ‘urban’ or ‘city’ music? What role does music play in rural life and development that is different from urban music?

“We’ve always had this connection to music made in the backwoods, whether those backwoods are in Ireland or Kentucky,” says the band. “It’s more basic, less twiddly knobs, more real. The subject matter is usually something human, something anyone can relate to like love, loss, happiness & joy. It’s not about fashion, being rich or superficial things. Our music is played best to small groups in pubs and halls rather than stadia or massive venues. It is, by inclination, music for an extended family or community type audience, rather than a big anonymous crowd.”

Doors open at 7.30pm with event starting at 8pm sharp.

Seating in the Damer House Annex is limited; therefore, it is advisable to pre purchase tickets as the Society cannot guarantee availability on the night. Admission fee is €12.

Tickets can be pre purchased from Colin Williams (Pattersons, Main St, Roscrea) from Friday January 10 and can also be purchased through Roscrea Heritage Society. Contact Pamela on 085 7114183 or email: roscreaheritagesociety@gmail.com The album Record is also available to purchase from Pattersons for €10.

RHS AGM will take place on Thursday, January 16, at 8.30pm in John’s Tower, Roscrea Castle. The society would like to encourage anyone who is interested in promoting our heritage, whether it be cultural, natural or built, to come along on the night. Annual membership is €10, new members are most welcome. The society would also like to congratulate Marcus and Irene Sweeney (Fancroft Mill Gardens) who recently won the Norman Campion Award Best Museum/Industrial Heritage Site at the prestigious Industrial Heritage Association of Ireland (IHAI) Awards 2019.