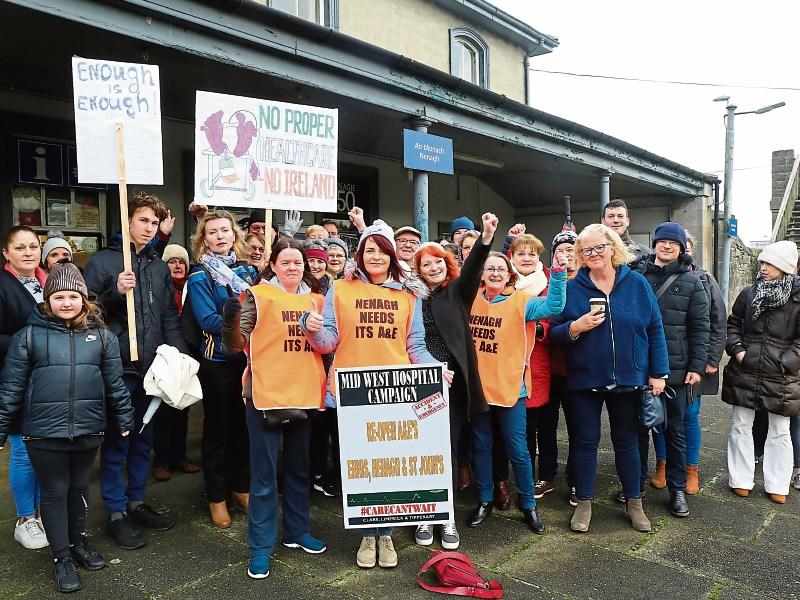 Hospital protest: some of the Nenagh hospital campaigners who travelled to Limerick to take part in the protest march

Several hundred campaigners from North Tipperary joined a protest march in Limerick last weekend calling for an end to the hospital crisis.

The protesters travelled to Limerick last Saturday by bus, train and car.

The march was organised by the Mid West Hospitals Campaign, with the Nenagh Needs its A&E group calling for the local hospital’s emergency department to be reopened on a full time basis.

The €19.5m project will begin to help address the acknowledged lack of bed capacity in the Mid West.

UL Hospitals Group and HSE Estates confirmed that the project was on schedule and the beds will be open before the end of 2020.

The modular units are being delivered by a fleet of 40-foot articulated lorries. In order to reduce congestion in the area, no more than one lorry is permitted on the hospital grounds at any one time.

The modular units for hospital ward levels 1 to 3 have been prefabricated offsite and are being parked up in an area within a few miles of the hospital awaiting delivery. A mobile crane is being used to install the units on arrival at the site. Installation of these units is due to be complete by end of this month and the concrete floor screeds, internal fitout, mechanical and electrical installation etc will then commence. The modules sit on the pre-cast basement roof which has already been constructed by traditional build.

The ward block will provide an additional 60 beds for the hospital, all single patient rooms with ensuites. The additional single rooms will help to improve patient comfort, safety, privacy and dignity and assist with the management of infection control in the hospital.

Colette Cowan, CEO, UL Hospitals Group, said: “Work is progressing well on the 60-Bed Block for UHL another milestone was reached this Monday with the arrival of the modular units on site. We expect the beds will be available for patients before the end of this year after all the equipment has been installed and tested and all the staff recruited and trained.”

UL Hospitals Group is currently finalising the details of a specific recruitment campaign for the approximately 140 whole-time equivalent staff required for this significant expansion of UHL’s bed capacity.

“This project will help considerably in reducing the long wait times experienced by too many of our patients, especially in our Emergency Department,” Ms Cowan said.

However, it is acknowledged by all parties that more capacity is required in the Mid West. It is important that we continue to progress the 96-bed Block which is included in the national development plan. A full design team has now been appointed for this project and a feasibility study is underway. We expect that a planning application will be lodged with Limerick city and county council later this year,” she added.