Co. Tipperary family "overwhelmed" at public response to fundraising campaign for US operation to help their daughter walk independently

The Griffin family need to raise €60,000 for life-changing surgery for two year-old Heidi 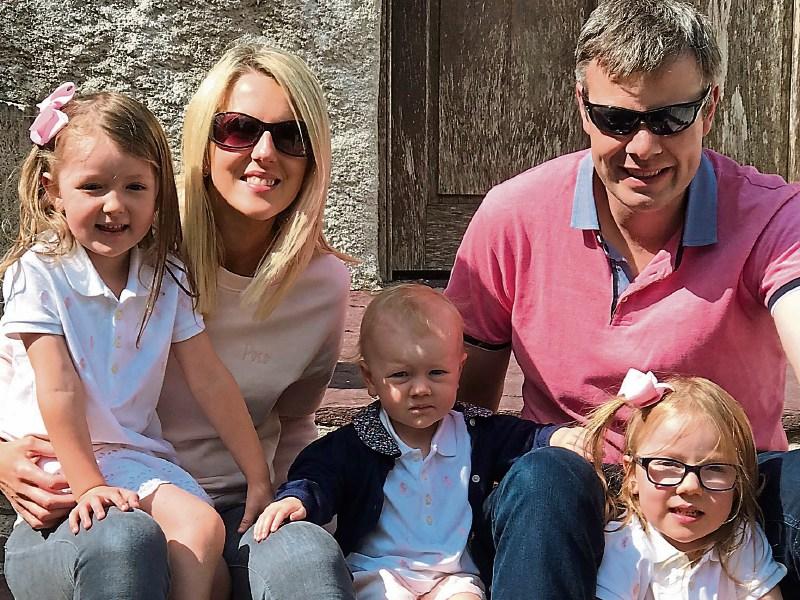 The Griffin family from Rathdrum, Fethard with two year-old Heidi seated in the centre.

A South Tipperary family are campaigning to raise funds to send their two year-old daughter to the United States in April for life-changing surgery that will give her the chance to walk independently.

Little Heidi Griffin from Rathdrum, Fethard suffers from a form of Cerebral Palsy called Spastic Diplegia, which effects her legs and means she can't stand correctly or walk unaided.

Her parents Pamela and Tom Griffin received news nearly  three weeks ago that due to a cancellation a place has become free for Heidi to undergo Selective Dorsal Rhizotomy (SDR) surgery at St Louis Children's Hospital in Missouri in the US on April 30.

The surgery, which will cost €60,000, will be carried out by the renowned neurosurgeon Dr TS Park and will enable Heidi to stand and walk unaided.

Pamela, who is an accountant, and Tom, who works in Glanbia at Derrygrath, learned on January 17 that Heidi was suitable for SDR  and were offered the surgery date. After a weekend of consideration, they launched a fundraising campaign to assist them pay for the operation.

Cloneen native Pamela (née Burke) said they decided to take the cancellation date offered to them because the earlier Heidi undergoes the surgery the better the outcome for her health.

“The longer the spasicity is in your muscles, the greater the chance you have of suffering orthopaedic issues with your hips and knees, and some children can develop Scoliosis,” she explained.

She pointed out the €60,000 fee must be paid 45 days before the operation. After looking into the possibility of securing a loan , the Griffins concluded the only option they had to come up with the money in such a short space of time was to fundraise.

Pamela admits it was a difficult decision for her and Tom to go down the fundraising route as it meant putting Heidi and their family “out there” in public.

However after talking to families in similar situations and seeing the success they had with setting up a Go Fund Me page they took the plunge.

They set up the Heidi's Happy Feet Go Fund Me page on Monday, January 20 and  their first fundraising event was a coffee morning in Clerihan Community Hall on Sunday, which attracted a huge crowd and raised over €5000.

Pamela said her family are overwhelmed and extremely grateful for the generosity shown by family, neighbours, friends and strangers to the fundraising campaign so far. The Go Fund Me page has so far raised €27,019 just two weeks since it was set up.

“People have really been terrific. They immediately rallied around us and pulled together to show their support.”

Two other upcoming fundraising events are an auction at The Final Furlong Pub in Clerihan on Saturday, February 29 and a tractor run in the Clerihan area on Sunday, March 1.

Pamela and Tom, who have two older daughters Sadie (6) and April (4), learned that Heidi suffered from Spastic Diplegia around her first birthday.

“When she was around nine months old, we could see she wasn't able to sit correctly and noticed there was something wrong between her hips and knees. She couldn't stretch out her legs,” Pamela recalled.

She brought Heidi to a neurological paediatrician in Cork and she underwent a series of tests including a MRI scan. After being diagnosed, Heidi began undergoing daily physiotherapy and stretching exercises to help with her condition.

Pamela says through the physiotherapy Heidi succeeded in crawling correctly but she is not able to stand or walk independently. “Her knees are almost bent. She is not able to get into the full upright position, which can mean so much.”

Through her own research and contact with other families who have children with the condition, Pamela found out about the Selective Dorsal Rhizotomy surgery being carried out by Dr TS Park in Missouri.

The family applied for Heidi to undergo the surgery in early December and she underwent a series of tests to establish whether she was a suitable candidate for the operation. When the Griffins' received the news on January 17 that she was suitable and were then offered the cancellation date, Pamela recalls she and Tom felt   excitement but also panic at the prospect of having to come up with €60,000 in such a short space of time.

The Griffins will spend  five weeks in the US for Heidi's operation. The  three-and-a-half hour long procedure will involve surgery on Heidi's spine. Pamela explains that the nerves sending the wrong messages to Heidi's muscles causing the spasicity will be cut. “Once the spasicity is gone it will allow her muscles to move more freely.”

After the operation, Heidi will have to undergo intensive phsyiotherapy, which Pamela says will always by a part of her life.

Since setting up the fundraising campaign, the Griffins have been contacted by another family  in a similar situation to them, who they have been able to point in the right direction. She says it's unfortunate that families of children like Heidi have to do their own research into SDR surgery and fundraise to access the operation. “Even though you may pay thousands a year in health insurance, it doesn't cover you because the surgery is outside the EU.”

Pamela's goal is to have Heidi walking independently within 12 months of the operation. Her wish is for Heidi to be able to walk into primary school in two years time and do the physical activities that are part of school life.

She describes Heidi as a typical two year-old full of chat and very charming.

“She is a beautiful little girl and she loves her sisters. I truly believe she will do whatever she wants to do in life. She just needs this little bit of help now.”

Anyone wishing to donate to the  fundraising campaign should go to www. gofundme.com and look for the Heidi's Happy Feet page. The link is: https://www.gofund