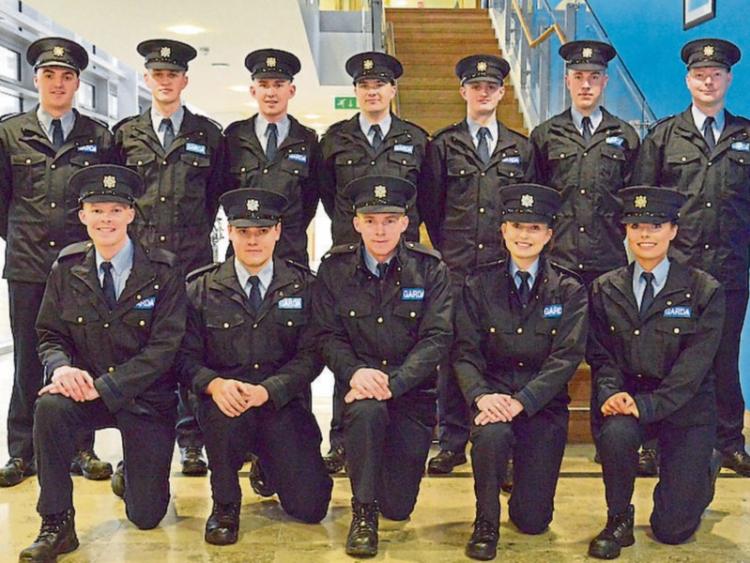 The twelve probationer gardai who have been assigned to Clonmel, Tipperary Town and Thurles Garda Stations

Three of the probationer gardai have been assigned to Clonmel district, four are stationed at Tipperary Town and five are based in Thurles.

They were part of the class of 192 that passed out from the Garda College in Templemore on Friday, February 21. Four probationer gardai were also assigned to Nenagh Garda District in January.

Tipperary's 12 new gardai gathered at the Department of Justice offices at Rosanna Road in Tipperary Town last Friday morning for a photocall, which was attended by Tipperary Garda Division's Chief Superintendent Derek Smart.

Chief Superintendent Smart said the arrival of these probationer officers will allow him more flexibility to increase the number of more experienced officers in the Tipperary Division's specialist units such as the drugs unit and protective services unit.

“These additional resources will enhance our ability to respond to the needs of the communities we serve.

“These 12 members will be going straight out onto the front line and will be policing our towns and villages,” he stressed.

A shortage of gardai in the Clonmel District recently led to Supt. William Leahy taking a decision to disband Clonmel's community policing unit in order to increase the number of officers in the drugs unit.

It's a move that has been supported by Chief Supt. Smart and the Garda Representative Association.

There has also been strong public and political criticism of the shortage of gardai in Carrick-on-Suir town and the drugs problem in the town over the past year and a half with a petition raised in the town  last year calling for more officers to be assigned to the town and longer opening hours for Carrick-on-Suir Garda Station.

When asked why despite these staffing issues, Clonmel District was receiving the least number of probation officers of the three towns, Chief Supt. Smart explained the Clonmel district has recently been assigned two additional sergeants, which brings the actual number of extra gardai in Clonmel to five.

He said he wanted to get more experienced gardai transferred from other divisions to Clonmel to boost its resources. And he pledged to fight for more extra gardai for this district and other garda districts in the county.

“I think this is the first step in getting where we need to be. I would like to have a lot more days like today,” he said.

The probationer gardai will spend their first 17 weeks in Clonmel, Tipperary and Thurles shadowing experienced officer  and during the following 17 weeks their mentors will in turn shadow them in their policing work. They will also do some classroom project work.

Two of the probationers assigned to Clonmel are Damien Buckley from Ballyclough, Co. Cork and Brian Burke from Croom in Co. Limerick.

Gda. Burke said he spent his first day on the beat on mobile patrol in a squad car and assisting with the execution of a search warrant on a house.

Gda. Buckley was also plunged into the thick of front line policing completing two night shifts in his first two days during which he was involved in checkpoint duty and executing warrants.

He said he joined An  Garda Siochana because he considers it to be a good job that will give him an opportunity to help other people. “It's a job people look up to and respect,” he said.