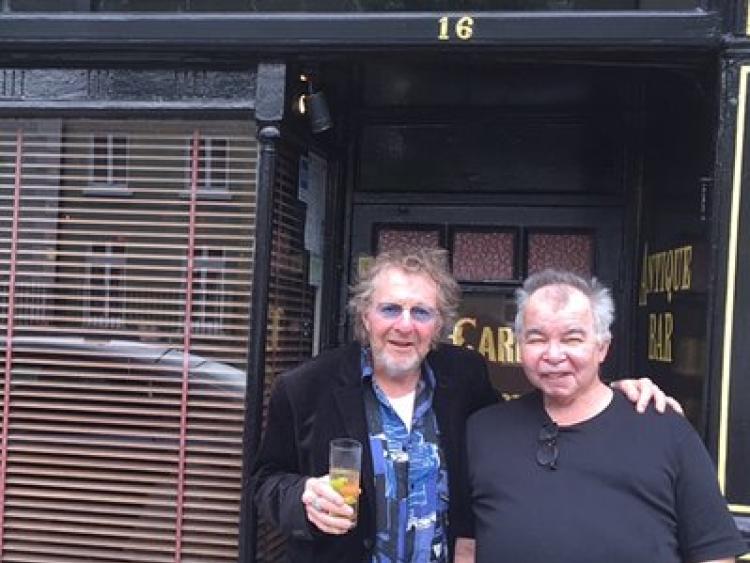 The late Philip Donnelly who made Clonmel his home for a long number of years had an enduring friendship with John Prine.
Months after Philip, who was a well known character in Clonmel and had a very loyal following for his performances in Clonmel,Fethard, Dundrum andother Tipperary venues,passed away in December his great friend the legendary singer songwriter John Prine passed away succcumbing to the coronavirus earlier this month.
Philip Donnelly, the “Clontarf Cowboy” who died on 28th November 2019 first went to America in 1974 to work with Donovan for a sprawling American tour in 1974.
He began working with John Prine in Cowboy Jack Clement’s recording studio in Nashville in the early 1980s and they became firm friends. “My first impression was that he played great guitar and he talked a lot,” Prine recalled. “When we were on the road, we were a party waiting to happen”
John Prine told a great story about the time he and Philip were in an airport after a show in the early days. They were down to their last few dollars when Philip bought The Wall St Journal with the money, as John was waiting in a queue for a hamburger. John said to Philip “why did you buy a newspaper with our last few dollars when we need to eat” John got a tap on the shoulder from the person behind him in the queue who gave him 5 dollars and said “don’t lose your faith in humanity” Philip and John used that line on many occasions in their friendship.
Philip said in an interview in 2015 “John’s songs are so brilliant: he’s in a very uncrowded room at the top of a pyramid in his craft. He’s who Bob Dylan listens to”
Philip brought John Prine to Ireland for the first time in 1986, and two years later he invited him to take part in his televised concert series The Sessions, recorded at the newly opened Point Depot. It was at an after-party in in Blooms Hotel where Prine met his wife Fiona, from Ardara in Co Donegal. She was managing Windmill Lane studios at the time.
John Prine – “In the mid-80s I went to Ireland with Philip; it was the first time I’d played in Ireland and I didn’t want to go home. I only played two shows and stayed two weeks.
John and Fiona bought a house in Kinvara in 2005, and John always tried to get back in the months when he was off the road, usually in January/February and in the summer.
“When Philip and I get together, we hang out and shoot the breeze. He comes over to Kinvara to spend a few days and we’ll play some music in my local pub; I’ll go over to Tipperary and do the same. At that stage Philip was living in Clonmel, and Phil Carrolls pub was where they would go when John came to Tipperary.

Whenever john Prine visited his friend Philip Donnelly in Clonmel Phil Carrols pub was always on the agenda.
Michael McGrath (Phil Carrolls Pub Clonmel) has some great memories of them enjoying a few pints in the pub.
“Over the last number of years John Prine would come to Clonmel for a night or two to catch up and reminisce with Philip Donnelly.
They both liked a drink and John enjoyed his pints of Guinness. They would both sit at the bar all evening. They would wander down to Ming, in the Emperor, for some food and they would come back to the pub again to finish the night. At that stage word would have got out he was in the pub and some diehard fans would start turning up amazed to see one of the hero’s sitting in a local pub. John was always very friendly to anyone who approached, and they were welcomed to join the company and to listen to the many fantastic story’s thet John and Philip were recounting. John always obliged with a photo opportunity for everyone. Himself and Philip seemed to have a great bond and the stories would flow non-stop between the two of them. He really seemed to enjoy those nights with Philip over the last few years.”

The President Michael D. Higgins wrote in tribute “He had a great love for the Irish landscape, especially the Burren and Flaggy Shore, as well as for the Irish people with whom he felt a great freedom. He was held in deep affection and warmth in particular in the village of Kinvara, where he had a home, and where his sessions in Greene’s were legendary. Despite being one of Johnny Cash’s ‘big four’ he was marked by a great humility. He always used local musicians as support acts for his concerts in Ireland, and collaborated with renowned Irish musicians, such as Dolores Keane, Paul Brady, Declan O’Rourke, Arty McGlynn, and most particularly before his passing, ‘the clontarf cowboy’ Philip Donnelly. It was fitting that he was the last act to play a concert in Seapoint as a venue before it was converted to a bingo hall”