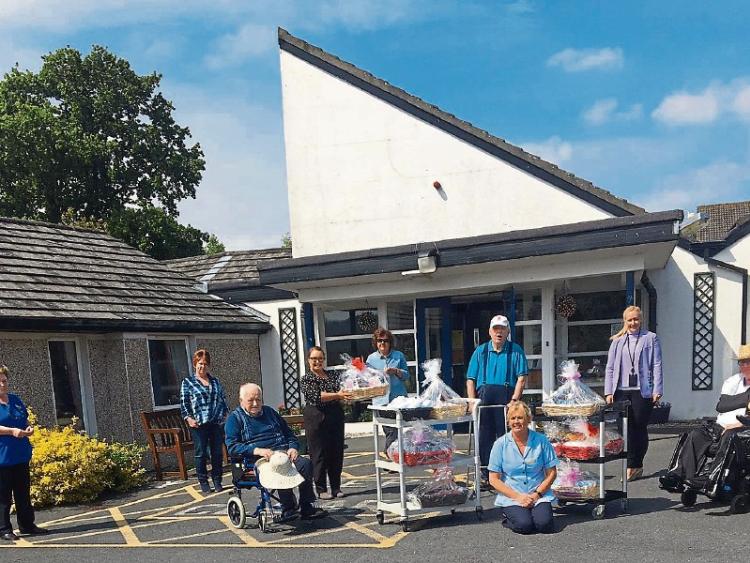 Mary Barrett, (back 2nd from left); Caroline Brett (back 4th from left), Paula McCormack ( 2nd from right) presenting the tablet devices and hampers to Greenhill Nursing Home staff and residents

A fundraising campaign spearheaded by three Co. Tipperary healthcare workers has purchased 11 tablet devices to help patients and residents in local hospitals and nursing homes see  their loved ones while Covid-19 visiting restrictions remain in place.

The campaign was run by nurse Paula McCormack and her colleages health care assistants Caroline Brett and Mary Barrett all based in Carrick-on-Suir.

Paula said she saw first-hand the huge upset and anxiety families are  experiencing because they can't visit loved ones in hospital.

“They can speak to them on the phone but are  unable to see them so I came up with the idea of getting tablet devices to break down the communication barrier.”

She said the tablet's larger screen is more suitable than a smartphone for elderly patients to connect visually  with loved ones.

After discussing the idea with her work colleagues ,  the trio set  up the  GoFundMe page  “Connecting Families with Loved Ones in Ireland” on April 17.  The campaign  received €3,214 in  donations.   After the GoFundMe fee was deducted the total was  €3,050.

Paula said they spent €2,200 buying 11 tablet devices that include a screen protector, hardbcase and earphones   They also spent €272 on care packages of toiletries, which were donated to Greenhill Nursing Home as eight hampers.

“We gave the first two tablet devices and eight care hampers to Greenhill Nursing Home in Carrick last Wednesday.  Five devices were given to South Tipp General Hospital last Thursday and one was given  to St. Brigid's District Hospital.”

They have also donated a  tablet device to the Little Sisters' Home in Waterford, Mooncoin Nursing Home and and to  St. Luke’s  Hospital in Kilkenny.  And gift sets worth €165  were donated to primary care health workers in Carrick-on-Suir. The €453 in donations  left over along with €1000 from Carrick Swan GAA Club  are to  be donated to South Tipperary Hospice movement.

Paula said one of the tablet devices donated to Greenhills Nursing Home was used within an hour of its delivery.

“It was very emotional as the families involved had not seen the patient in six weeks and the lady was very poorly. It was a very special moment as sadly the lady passed away the next day,” said Paula, who stressed her death was not  Covid-19 virus related.

Paula said she and her colleages Caroline and Mary wish to thank all who donated so generously, especially the people of Carrick-on-Suir and surrounding areas.