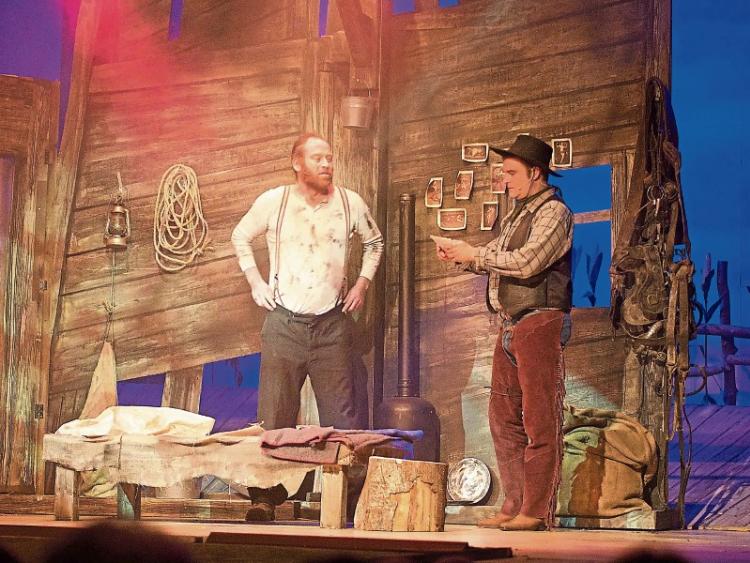 Derek Ryan (left) playing the role of Jud Fry in Carrick-on-Suir Musical Society's production of Oklahoma earlier this year. He is pictured with Michael Raggett, who played Curley in the show.

One of the leading performers in the Carrick-on-Suir Musical Society’s recent production of the  classic Oklahoma has been nominated for an Association of Irish Musical Societies (AIMS) Best Supporting Actor award.

Well-known bass baritone singer, Derek Ryan, is nominated for the award for his portrayal of the sinister farm hand Jud Fry in the Rodgers & Hammerstein musical staged at Carrick-on-Suir’s Strand Theatre from February 29 to March 7.

Mr Ryan was one of two visiting  performers who joined the Carrick-on-Suir Musical Society cast of Oklahoma.  The Nationalist review of the show lauded Mr Ryan for his “stand out portrayal” of Jud Fry.

“His Jud was a truly creepy, brooding presence on the stage and it was worth attending the show alone to hear him sing “Pore Jud is Daid” and “Lonely Room” in his powerful bass voice in Act 1,” our reviewer wrote.  The AIMS awards nominations were announced on Sunday, May 24 and the award winners will be announced on Saturday, September 19.