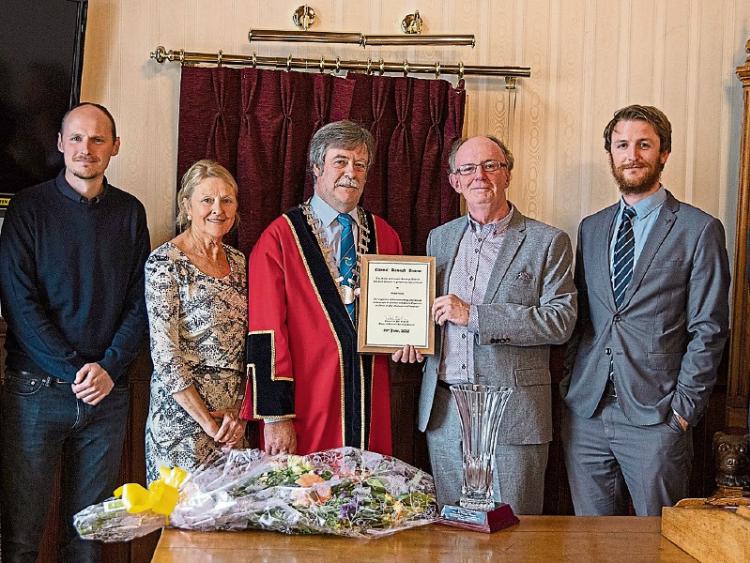 Michael Heverin with his family at the mayoral reception. From left: son Mike, his wife Anne, Mayor of Clonmel Cllr Pat English, and son Peter.

Michael Heverin, who has retired as editor of The Nationalist newspaper, was accorded a fully deserved Mayoral Reception by then Mayor Cllr Pat English at the Town Hall in Clonmel recently.

In bestowing “the highest honour a local authority can give,” Cllr English said the council had convened to recognise Michael’s contribution as a journalist and as an editor of The Nationalist but also his valued contribution to the people of Clonmel and south Tipperary in general over many years.

In what was a special  Mayoral Reception due to the Covid-19 restrictions, and limited to just 16 in attendance, the then Mayor gave a brief outline of Michael’s career in journalism over 45 years or so from his college days in Rathmines to his years spent with the Wexford People before his arrival to Clonmel and The Nationalist in 1989.

Cllr English highlighted the role of the paper “as advocates for many rural and local issues and it being a strong voice for the people of Clonmel and south Tipperary”.

Cllr English pointed out that since becoming editor that Michael Heverin had “provided a strong voice for many important issues and services to the town and to the county”.

Included in that list were the Save Our Hospital Campaign for South Tipperary General, the fight to retain St Vincent’s Hospital in Tipperary Town, the voice for Mental Health Services in the county particularly after the closure of St Michael’s in Clonmel, and also the campaign to keep Kickham Barracks open.

“Local journalists are very important in interpreting what is really going on in our communities and neighbourhoods, and in explaining all that to their readers,” added the then Mayor. “So a big thank you also to all the staff of The Nationalist, both present and past, who have served the people for the past 130 years,” added the town’s first citizen.

The then Mayor’s address was echoed in sentiment by contributions from Councillors Michael Murphy, Siobhán Ambrose, Richie Molloy and Niall Dennehy.

Cllr Murphy told Michael“to be very very proud of your contribution over 40 years in an outstanding career in journalism. You played an important role in holding many public representatives to account”.

The Fine Gael councillor added that the editor of  The Nationalist - which he described as “an institution” - was “a voice for so many different groups and different causes”.

Fianna Fáil’s Cllr Siobhán Ambrose also complimented Michael Heverin on his deserved Mayoral reception and in particular wanted to “thank him and The Nationalist for its hospital services coverage during the Covid-19 period”.

Cllr Richie Molloy said that “the Mayoral Reception is the highest honour a local authority can give and it is only fitting that we give it to Michael”.

Cllr Niall Dennehy spoke in glowing terms of the contribution The Nationalist and some of its former staff had made to Clonmel over the years. He stated that while the council could no longer bestow a Freeman of the Town honour, like he had done as Mayor in 2002 to former editor the late Brendan Long, he said Michael was fully deserving of this Mayoral reception.

In reply to the bestowing of the honour, and somewhat humbled by the occasion, Michael  said “it is a huge honour and a huge privilege, and I am not taking it lightly”.

“It absolutely means the world to me and my family,” he began.

From his first days in covering Corporation meetings in the Town Hall, the Chamber itself had always impressed him.

“Anytime I came in here to cover a meeting I felt that was a privilege,” he said. “I don’t think there is a council chamber in the country like it. It is absolutely a most incredible setting for the promotion and the development of local democracy.”

NO BETTER TOWN THAN CLONMEL

The editor praised that democracy and those who uphold it. Since his arrival in Clonmel and first covering meetings, he said he had noticed “the huge commitment that all the councillors have to the town. That doesn’t surprise me because “I can safely say having come from Castlebar and having worked in Wexford, I don’t think there is a better town in Ireland than Clonmel. It has everything going for it and I think you are the custodians of it, the people who keep it for future generations,” he said.

“The setting alone, the backdrop of the Comeraghs, the River Suir flowing through it. I think it is inspiring.

“And I want to pay a warm tribute to you and your predecessors who played such a key role in developing it and maintaining it to that level,” he said.

Links between The Nationalist and the council have always been very strong, the editor agreed with some earlier comments by councillors. The link between council and paper is very important - “both of us are two pillars of local democracy and I think that one without the other wouldn’t work,” added Mr Heverin. Looking ahead, the retiring editor was excited about future plans and urban development and the promotion of the town. 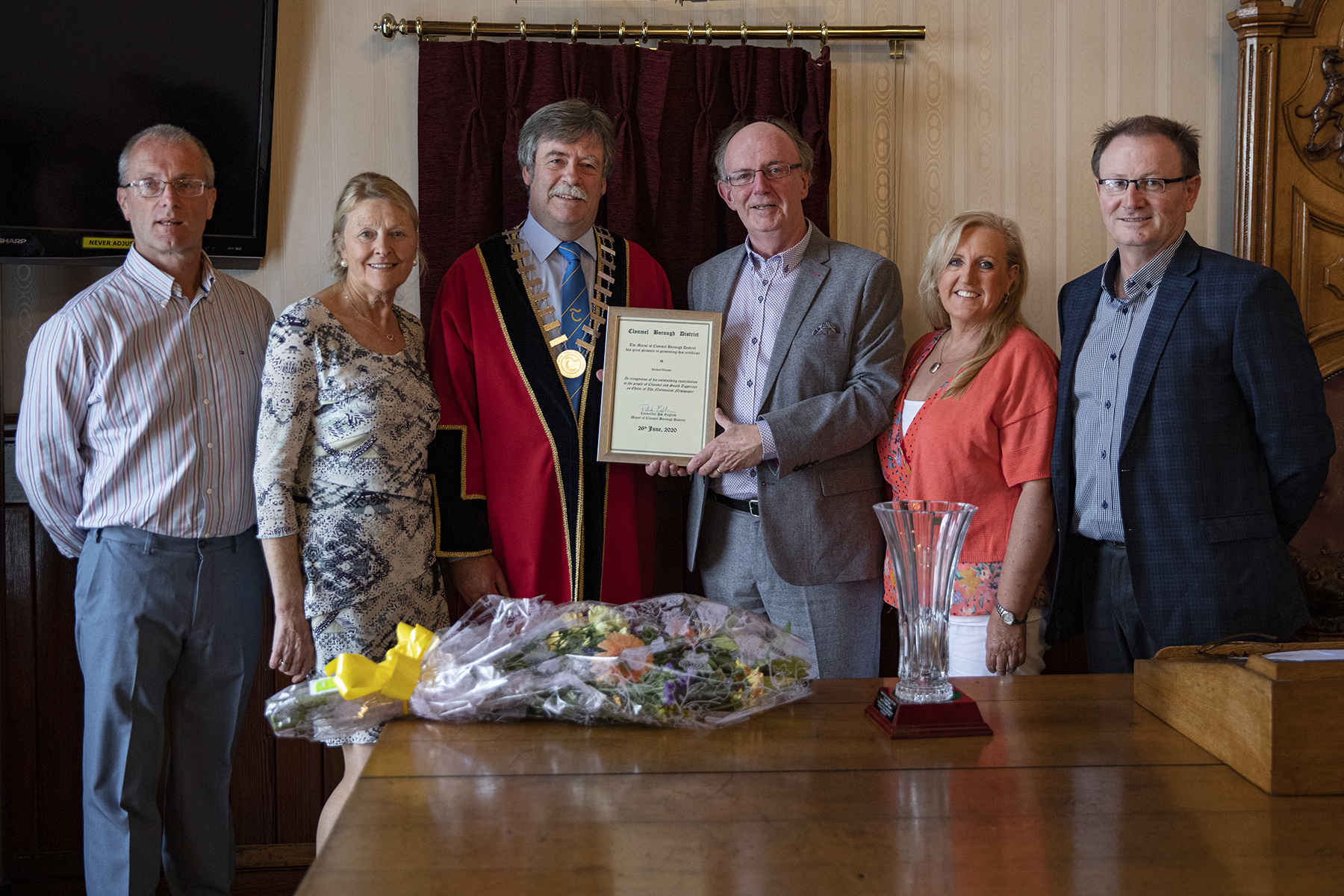 Michael, his wife Anne and Mayor of Clonmel Cllr Pat English pictured with some of Michael’s colleagues at The Nationalist from left: Eamon Lacey, Ruth Butler and Jeddy Walsh

“It is wonderful to see the work that you have done not to let the demise of Kickham Barracks to become a permanent feature.

“It is a remarkable landmark in the centre of the town and to realise at the time that we cannot let this go, that this is part of the town’s heritage and tradition and what had been done to build that up piecemeal by piecemeal. But I think that what you are undertaking at the moment with the Clonmel 2030 Regeneration is huge progress. It is a huge progressive sign for Clonmel and when that materialises across all the different platforms that you are planning, added to the Suir Island development, I think that will make Clonmel an even better town than it is now.”

As he has always done on a weekly basis, the editor was quick to spread the credit of his publication to all the staff.

“I want to acknowledge my colleagues - there are three of them here today - there would be more apart from social distancing but that alone is important. I accept this honour today on behalf of everybody in The Nationalist,” he added.

“There is an editor but that doesn’t exist without a team and the one thing we have there is a team - it’s a great team. When I came into the job Eamon (Lacey) and Jeddy (Walsh) were there and Eamonn Wynne, and the late Mick Strappe and Ted Dillon who guided me through the ropes. They made me feel welcome as an outsider coming into the town. I found that very special,” he added.

A VOICE FOR THE PEOPLE

Michael was still the passionate newspaper man even as he began the last week of his career.

“The paper is a voice for people that don’t have a voice. We provide a platform for people that might have been unemployed, the homeless, the mentally ill, those with other sicknesses. Sometimes people come to us and say officialdom weren’t listening to us. So I would like to think that we would have that option and give them an outlet to do that,” he said. Before concluding, Michael lavished great praise on his wife Anne (née Shortall, Fethard), their two boys Mike and Peter who had travelled down from Dublin for the first time in months, and Anne’s sister and brother, Marie and John.

“It was a proud family occasion, unfortunately restricted due to the Covid-19 regulations, but momentous nonetheless,” he said.  Summing up, Michael again thanked the then Mayor for the huge honour.

“I am over the moon with it. I didn’t expect it, it’s not something I deserve. I was just doing a job and if I made some contribution, however small, to our paper, to the town, to the community, I’ll be happy with that”, he added.