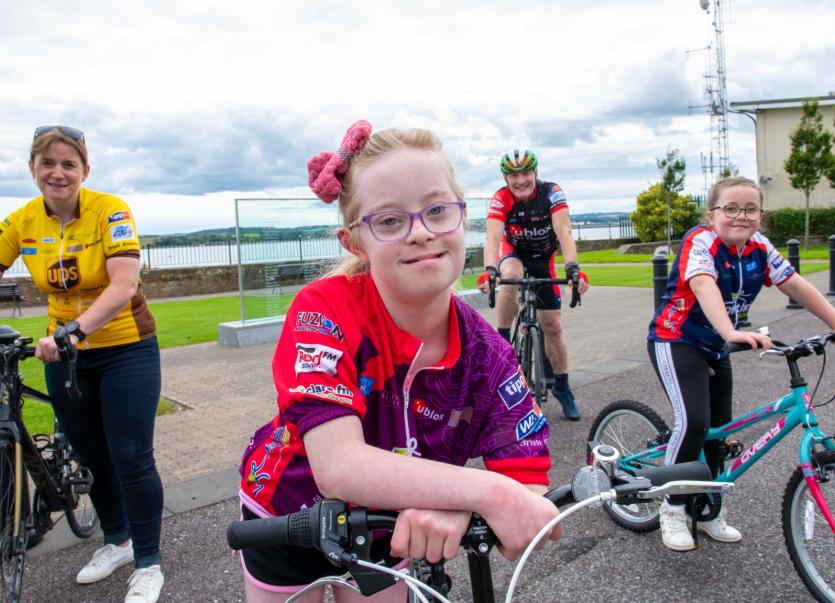 Nichola Power and her daughters Caoimhe (left) and  Cliona along with  Paul Sheridan, founder and Tour organiser

This August, the Tour de Munster charity cycle is celebrating its 20th anniversary and will set out on its most important tour yet in order to raise vital funds for the Munster branches of Down Syndrome Ireland and individual beneficiaries.

Founder of the tour, Paul Sheridan said, “I started Tour de Munster back in 2001 as I wanted to do something to support children's charities while doing something that I love - cycling. It's an important milestone this year and given the times we are living in - fundraising for children in need is more important than it has been since the first charity cycle back in 2001.”

Taking place from August 6 to 10, the tour will see participants travel 600km through the beautiful towns and villages of Munster as they support Down Syndrome Ireland’s Munster branches and individual beneficiaries who urgently require funds.

As a result of the Covid-19 pandemic, the Munster branches of Down Syndrome Ireland (DSI) have seen the majority of their vital funding events cancelled over the past number of months. On top of this, branches are now facing significantly increased costs as they prepare to reopen their centres to enable regular one to one services such as Occupational and Speech and Language Therapies to take place.

Paul Sheridan said, “Like many things, it was unsure if the Tour de Munster could take place in a physical format this year but no matter what, we were still going to do our very best to raise as much funds as possible for these amazing young children and adults with Down syndrome. With restrictions lifted, we are delighted to be taking to the road this August with increased safety measures. It’s evident how extremely difficult Covid-19 has been for those with Down syndrome and the six branches of DSI across Munster and we want to do as much as possible to raise funds and awareness.”

This year’s tour will start in Cork City and once again showing his support will be cycling legend Seán Kelly, participating in the tour for the 14th time.

Commenting, Seán said, “For the past thirteen years, I have had the honour of meeting so many wonderful individuals with Down syndrome. No matter what challenges face them, their strength and positivity is remarkable. Having been involved in the tour and meeting so many families throughout the years, it really opened my eyes to the support that is crucially needed for those with Down syndrome.”

The goal of DSI is to enable children born with Down syndrome to be as independent as possible, and through the great work of the Tour de Munster cyclists and supporters, DSI can access the funding needed to help more young people with Down syndrome develop and flourish in practical ways.

Also participating in the tour for the fourth time this August is Tipperary native Nichola Power.

Nichola’s 12 year old daughter Caoimhe has Down syndrome. Nichola said, “As a parent, I have witnessed first hand the significant difference funds raised by Tour de Munster have made. The funds allow members to receive services such as Speech and Language Therapy which are so vital, especially from a young age. I am delighted to once again join the tour this August as we continue to raise vital funds and awareness.”

Speaking ahead of the 2020 Tour de Munster, Deirdre Saul, Interim CEO of DSI said, “The fantastic support from Tour de Munster over the past 11 years has made life-changing differences to those with Down syndrome in Munster and we are very grateful for everyone’s continued support. As a result of Covid-19, funds are needed now more than ever. The pandemic has meant that children and adults with Down syndrome have been unable to attend regular face to face appointments. Repetition is key for those with Down syndrome to enable them to keep progressing and improving their daily lives. Having been unable to attend these services as a result of Covid-19, it has been extremely difficult for children and adults with Down syndrome as well as their families.”

This year’s Tour de Munster begins on Thursday, August 6 in Cork City and returns to Cork on Sunday, August 10.

For further information and to donate visit www.tourdemunster.com and find it on Facebook