She vows to take her protest to Dáil Eireann if necessary 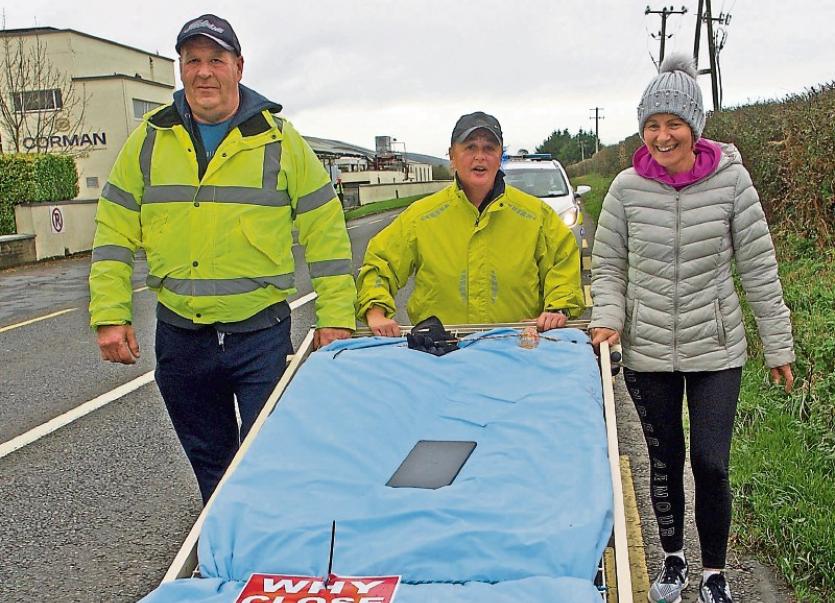 A Carrick-on-Suir woman, who pushed a hospital bed 23.5km last weekend to highlight the need to reopen St Brigid’s District Hospital in her hometown, will embark on another bed push for her campaign this Saturday.

When she reached Carrick, local people lined the road into the town and cheered Catherine as she passed by.  Many joined in walking behind her from Treacy Park to St Brigid’s Hospital.

Now the Carrick-on-Suir River Rescue team volunteer has vowed to continue her  bed push protests every Saturday in Carrick-on-Suir until the HSE moves to reopen St Brigid’s, which is now closed six months.

And she declared: “If they don’t open the doors of St Brigid’s, me and my bed will go to Dáil Eireann.”

Up until the Covid-19 pandemic crisis engulfed the country earlier this year, St Brigid’s provided convalescent, respite and palliative care for older people in Carrick-on-Suir and its hinterland including residents of    neighbouring counties Kilkenny and Waterford. It was redesignated by the HSE as a step-down unit for recovering Covid-19 patients in April but closed a few weeks later due to a lack of Covid-19 patients.

But the Minister and HSE haven’t given a  date for when this will happen on the grounds of concerns that a second wave of the virus will require the hospital to be used again as a Covid-19 step-down facility.

Catherine said she agreed 100 per cent with St Brigid’s Hospital being used for recovering Covid-19 patients if the demand is there for this type of care but she doesn’t agree with the hospital being kept locked up and lying idle in the meantime.

“A locked hospital is no good to anyone. It must be reopened and got up and running again. If Covid-19 gets serious people wouldn’t mind it being used for patients recovering from the virus but they must reopen the doors,” she argued.

She said  there is still a great need in Carrick-on-Suir and its hinterland for the respite, convalescent and palliative care St Brigid’s provided before the pandemic.

Catherine’s father received palliative care at St Brigid’s before he passed away at the hospital in January. Other close relatives of hers were also cared for at St Brigid’s in their last days.

“St Brigid’s  is all we have in our town, which has a great community who have fundraised over years and years to help build up this brilliant facility,” she said.

“The hospital has been used by many families in the Carrick-on-Suir area who have been able to visit their family and friends recuperating there or have had the privacy to be with their loved ones being cared for in the hospice rooms.”

Catherine was delighted with  the support she received from Carrick-on-Suir people last Saturday.

She thanked former TD Seamus Healy who accompanied her at the start of the bed push in Clonmel and  Maurice Cagney of the Tipperary Fight for Mental Health Services group, who walked with her  from Clonmel to Dove Hill where she took a break before completing the journey to Carrick-on-Suir. She also thanked  Derek Doherty for all his help and support and  gardaí who escorted her in the final miles of her journey.

Catherine’s next bed push takes place around Carrick-on-Suir this Saturday starting at St Brigid’s Hospital at 3pm. Anyone wishing to support Catherine during the bed push is asked to wear a face masks if possible and adhere to government guidelines on social distancing.