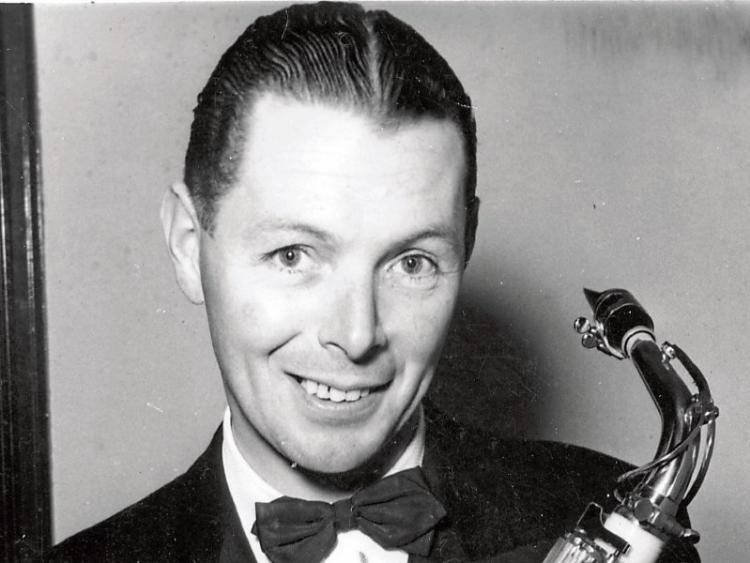 Mick Delahunty and his band were a fixture on the ballroom scene for 50 years. Picture: Donal Wylde

Donations received for a CD of the rediscovered recordings of a legendary Clonmel musician will be used to purchase instruments for the town’s brass and reed band.

The recordings from several shows performed by dance band leader Mick Delahunty, which hadn’t been heard in over 72 years, were discovered earlier this year on four vinyls at the Tipperary Museum of Hidden History, which coincidentally is located in Mick Delahunty Square in Clonmel and is celebrating its 20th anniversary this year.

The tracks were recorded in 1948 but never released to the public and had been forgotten about, after the records were donated to the museum in 2005.

The project to transfer the recordings onto a CD was spearheaded by Marie McMahon, the museum’s managing curator and supported by local music stalwarts and professionals.

“It has been a labour of love,” she says.

“The records were expertly remastered by Harry Bradshaw. The images for the sleeve were supplied by Donal Wylde (the former Nationalist photographer and RTE cameraman) and the museum’s collection, while the editorial was written by Denis O’Sullivan.”

The project was funded by the Creative Ireland Programme and Tipperary County Council. This significant funding has allowed the museum to distribute the CD free of charge.

“As a result of this great news, the museum has partnered with Clonmel’s long-established marching band Banna Chluain Meala,” says Marie McMahon.

Token of goodwill for the band

“Mick Delahunty had a major interest in Clonmel’s youth orchestras. We hope to fund the purchase of a number of brass instruments as a token of goodwill to strengthen the ties with Banna Chluain Meala.”

These will include a saxophone, the instrument with which Mick Del was synonymous. 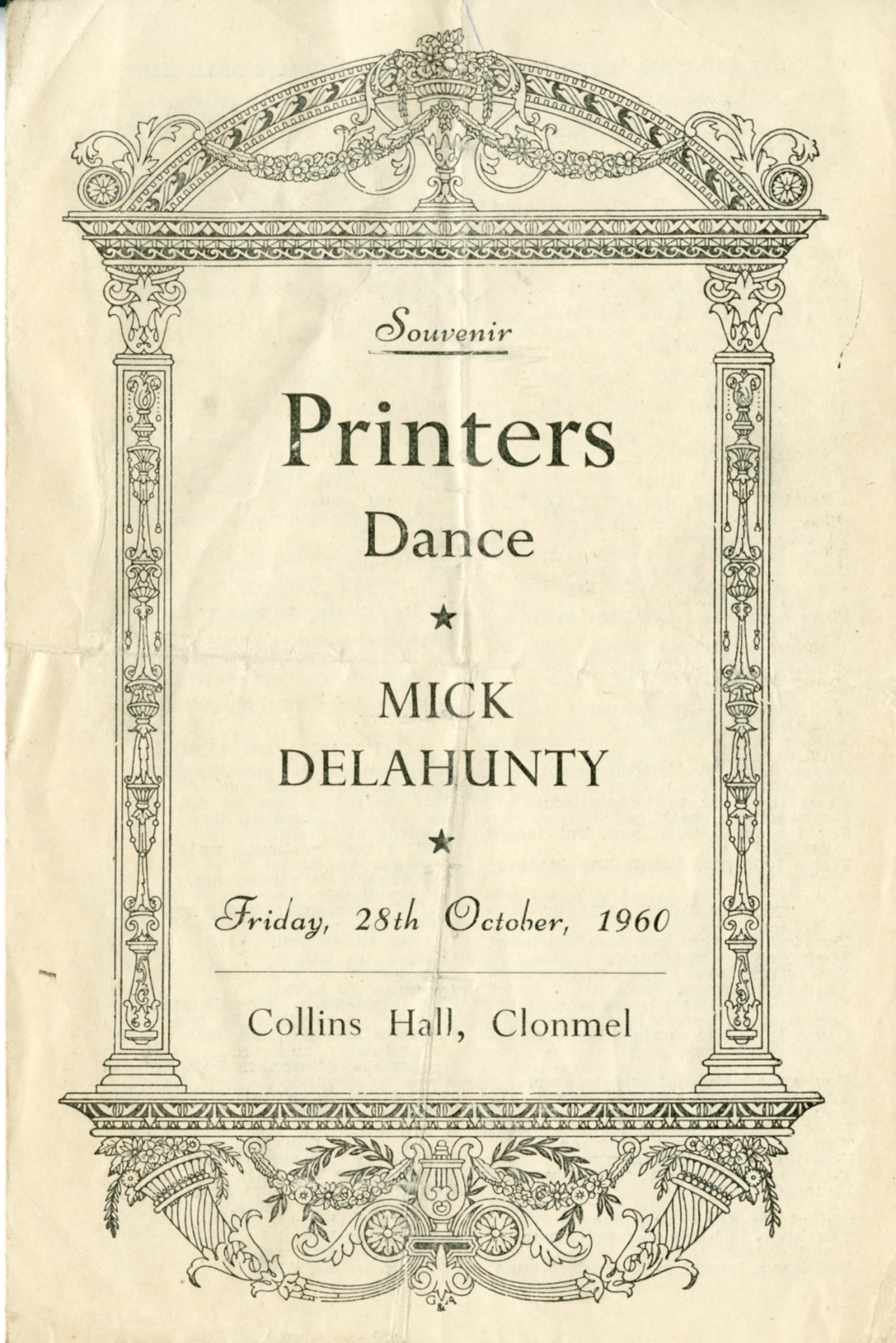 Above: A ticket for the Printers Dance at the Collins Hall (now Circles) in Market Street, Clonmel, at which Mick Delahunty performed on October 28 1960. The Printers Dance was for many years one of the town’s great social occasions

“We are asking those picking up a CD to donate a few euro to support our funding drive and our post and packaging costs,” says Ms McMahon.

“We are also asking those ordering a CD to consider sending me a letter about their memories of attending a Mick Delahunty Dance. I’d be thrilled to add this archive to our Mick Delahunty collection in the museum,” she says.

More than 600 copies of the CD have already been distributed.

“We have received a huge volume of letters from Mick Del fans who also included donations for the museum to gift a saxophone to Banna Chluain Meala,” says Marie McMahon.

The ten tracks include many standards that Mick Del made his own including Little Brown Jug (with a spoken introduction), You Made Me Love You, I Wonder Who’s Kissing Her Now, Danger Ahead and American Patrol. 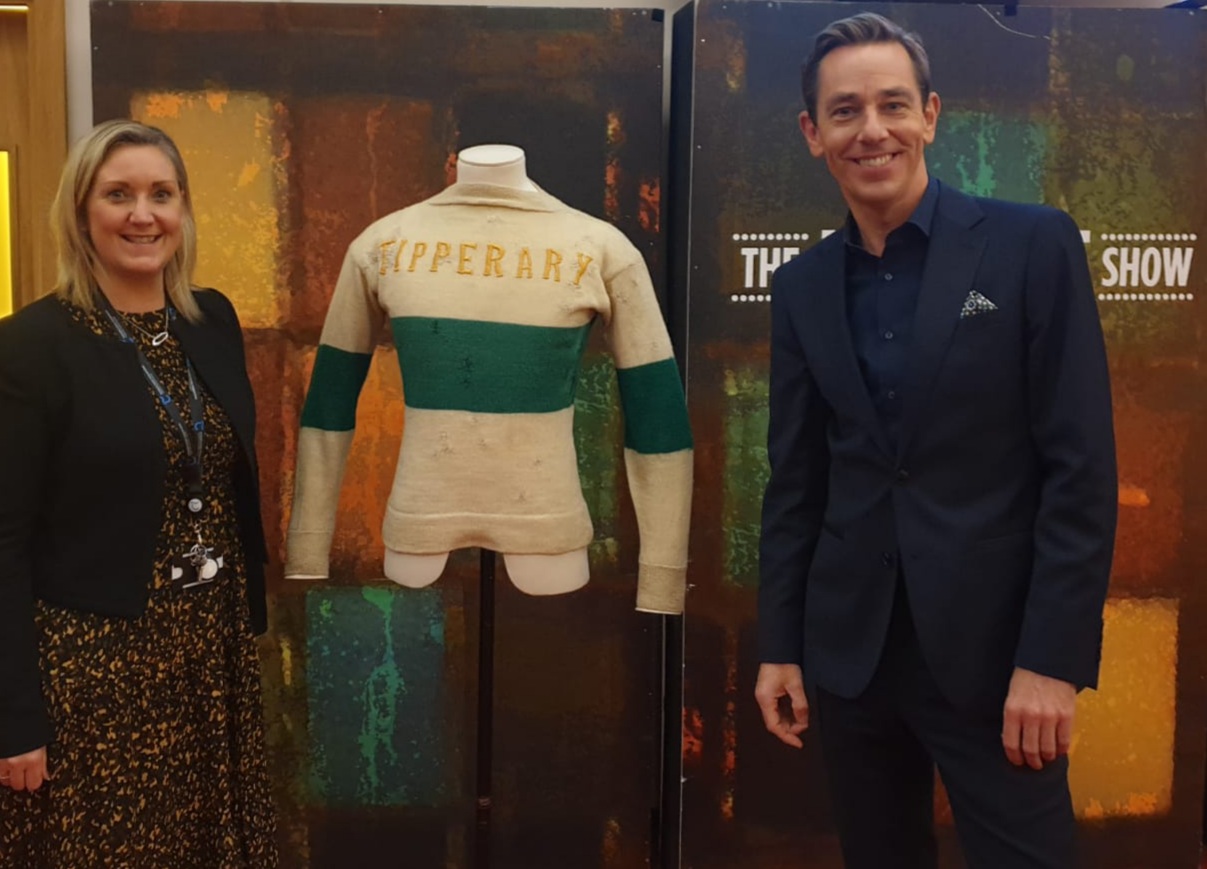 Above: Marie McMahon, managing curator of the Tipperary Museum of Hidden History, with Ryan Tubridy earlier this month when the jersey worn by Tipperary footballer Michael Hogan when he was shot dead in Croke Park on Bloody Sunday 100 years ago this month was displayed on The Late Late Show. The jersey is on permanent display at the museum in Mick Delahunty Square, Clonmel

They were recorded at Mick Delahunty shows in Clonmel and Waterford and the sound quality is very impressive.

One of the tracks is an interview with Patricia Cantwell, in which Mick talks about his early dance band days, and which was broadcast on CBC Radio in Clonmel in May 1983.

Based in Clonmel, Mick Delahunty and his big band were one of the country’s most popular acts and a fixture on the Irish ballroom scene for 50 years.

Mick collapsed and died on the dance floor at the band’s farewell show at the Greenwood Inn in Ardpatrick, Co Limerick in February 1992. He was 76.

The CD, which would make an ideal Christmas present, may be ordered by calling the museum on 076-1065252 or emailing museum@tipperarycoco.ie