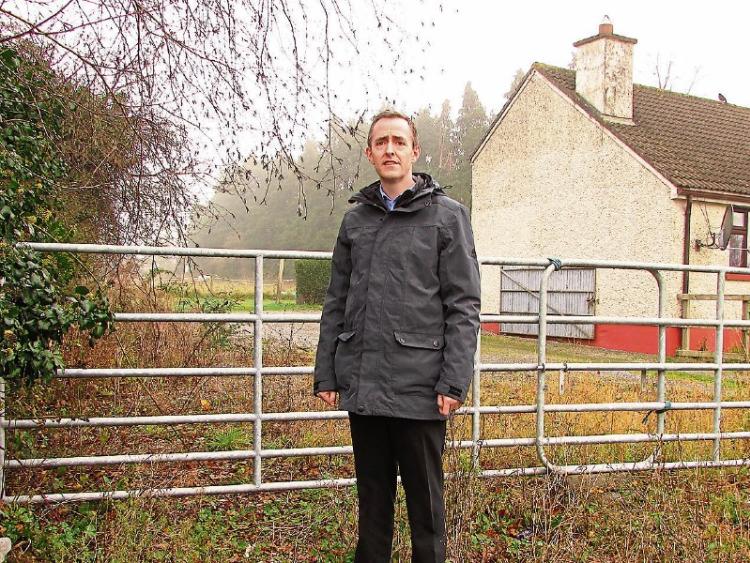 Darren Kirby from Butler's Court, Cahir standing at the entrance to the site for the eight new houses at Killeigh, Cahir. Picture Maria Taylor

Tipperary County Council’s planning approval for a new estate of eight houses in Cahir is being appealed to An Bord Pleanála primarily because of local residents’ fears about its impact on road safety along the town’s busy Clonmel Road.

The appeal has been submitted by Darren Kirby from Butler Court, Cahir, one of three local residents who lodged observations to Tipperary County Council in relation to developer Maurice Casey’s planning application for the housing estate proposed for Killeigh, Cahir.

He has decided to highlight his decision to appeal to raise awareness about the threat to road safety arising from the extra cars that will travel to and from the new development onto an already very busy road.

The eight semi-detached homes are proposed for a site next to Butler’s Court directly behind Jenkins Cottage.

The entrance to the development will be within 50m of the Butler’s Court exit onto the R640 Clonmel Road.

Mr Kirby said a traffic study carried out for the planning application calculated that when the eight new houses are occupied there will be 64 extra car trips daily turning onto and turning off the Clonmel Road next to Butler Court.

He believes the extra traffic from the new homes will present the greatest safety risk to Clonmel Road users during three rush hour periods on weekdays.

These are the morning work and school travel period from 6am up to 9am, the secondary school collection time around 4pm and the return from work period around 5pm and 6pm.

Mr Kirby said the road through Butler’s Court is used by cars to travel to and from Cahir’s Colaiste Dun Iascaigh, which has a student population of more than 800.

Butler’s Court is also surrounded by several other housing estates and there has also been an increase in the volume of traffic in the area due to the recently opened primary care centre at Barnora.

Mr Kirby fears vehicles turning right from Butler’s Court onto the Clonmel Road into Cahir town centre will have their view obstructed to oncoming vehicles coming from their left on the road due to traffic coming from the new estate.

He is also concerned there isn’t sufficient space on the Clonmel Road for vehicles to turn right into the new development.

He fears passing vehicles will be forced to use the existing bicycle lane.

He says the observations he and other Butler’s Court residents submitted to Tipperary County Council requested a reduction in the number of houses in the estate. But planning approval was granted for the eight homes in October.

“I have submitted an appeal to An Bord Pleanála as I am still very concerned for the safety of road users at the junction.” By raising awareness of the road safety dangers at the Butler’s Court exit, he hopes people regularly using the junction and residents in the Clonmel Road area of Cahir will contact their local councillor or TD to voice their concerns and lobby for a safer alternative. Mr Kirby lodged his appeal with An Bord Pleanála on November 3 and a decision is due next March.

“I think if they do go ahead with the development there will have to be serious traffic calming measures put in place.”

He suggests a roundabout may need to be built at the Butler’s Court exit to help slow and control traffic on the road.

Concern about road safety on the Clonmel Road is galvanising Mr Kirby and other local residents  to set up a Clonmel Road Residents Association.

Mr Kirby says they plan to form the group in the New Year and their first task will be to seek help to improve road safety in the area.