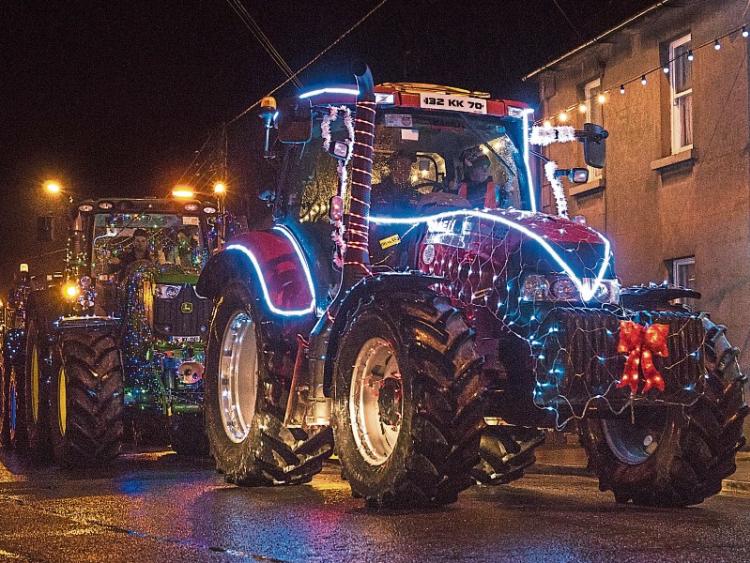 The Christmas Tractors of Carrick-on-Suir parade can’t go ahead this month due to the Covid-19 pandemic but its organisers are planning an illuminated tractor run instead though the date and route are top secret.

Up to 20 tractors festooned in Christmas fairy lights will embark on a 32km run that will cross into three counties and two provinces some time between now and Christmas.

The Crop Cruisers tractor drivers, who are organising the run, aren’t revealing when and where the event will take place to prevent crowds gathering to watch them along the route.

Farmer Stuart Downie of the Crop Cruisers said they came up with the idea that instead of people coming to see their tractors parade through Carrick-on-Suir they were going to bring the tractors to the people.  The arrival of the convoy of dazzling tractors in a community will be a Christmas surprise.

“People can see the tractors if we happen to pass down their road and they remain in their properties  The event will be streamed live on the Crop Cruisers and Christmas Tractors of Carrick-on-Suir Facebook pages.”

Stuart, who farms at Tybroughney, Carrick-on-Suir, said the Crop Cruisers will post clues of the locations  the tractor run will pass through on Facebook an hour before they arrive.

The annual Christmas Tractors of Carrick-on-Suir Parade, which attracts crowds of more than 20,000 to Carrick-on-Suir, always supports local worthy causes and this year is no different.

Mattie currently requires full-time care at Waterford University Hospital and his family’s hope is that he can secure an urgent assessment for the National Rehab Clinic in Dun Laoighaire to try improve his quality of life.

While there won’t be any collection boxes for the public to make donations at the tractor run, Stuart said the Crop Cruisers are encouraging the public to donate to Éabha’s Hope GoFundMe page.

He  said the Crop Cruisers tractor drivers plan to do a whip around among themselves on the night of the tractor run and donate the proceeds to the fund.