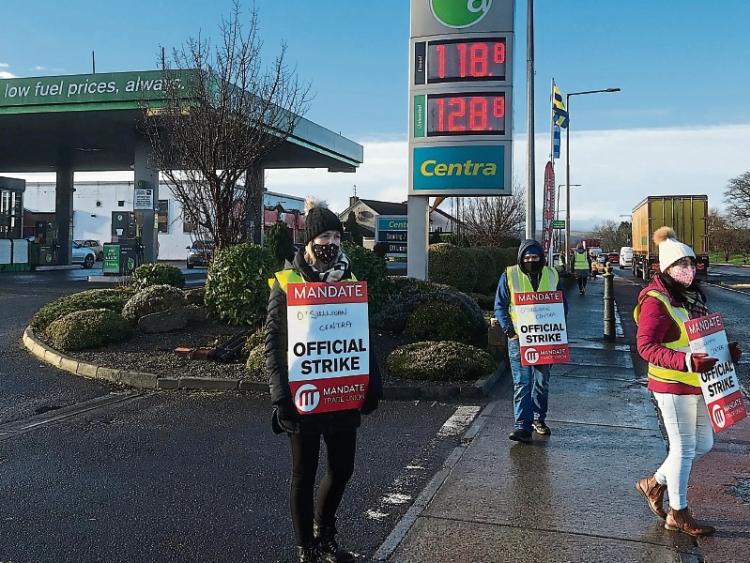 Ten workers at a Carrick-on-Suir service station shop will stage a second one-day strike tomorrow (Friday) in an industrial dispute over the failure of their employer to engage with their trade union in negotiations over pay and working conditions.

The second day of strike action by the Mandate union members over trade union recognition, pay and conditions at O’Sullivan’s Centra Service Station Shop at Ballylynch, Carrick-on-Suir will run from 6am to 6pm on December 18.

It is being organised eight days after the first day of strike action by the workers last Thursday, December 10.  A total of 46 people work at the busy service station store  on the Pill Road.

Mandate divisional organiser, Betty Dillon, said the second strike day is being organised as the  employer  continues to refuse to engage with the union representing the ten members of staff.

She warned the industrial action will escalate further if the company continues to refuse to recognise the union.

She said it was the only way forward now because these staff members have spoken and they clearly said they want to be represented by the union and want the union to commence talks on their behalf.

The company, meanwhile, issued a statement through Edelman PR, stating it preferred to deal directly with staff rather than with a third party.

“We respect people’s right to join representative organisations but we are a small family business with five full-time colleagues and 41 part-time staff, and our position as a store has always been that we deal directly with colleagues, rather than a third party.”

“Given the small size of our business, we have found that this is the best way to engage with colleagues,” the statement added. The company didn’t wish to comment further when contacted  in relation to the second day of strike action.

Ms Dillon responded that arguing the firm was small was not a valid reason for not recognising Mandate to represent workers in industrial relations. She pointed out the union represented workers in many small retail companies.

In relation to the fact the 10 workers involved in the dispute constitute a quarter of the shop’s workforce, Ms Dillon said many of these ten workers were the shop’s longer serving “core” staff.

“I have said it before. This is 2020 and the sky is not going to fall in because a group of workers want to be represented by a trade union.”

Ms Dillon roundly rejected an allegation that there was intimidation of some customers who passed the strike picket last Thursday. She claimed the union’s members were themselves subjected to intimidation by a group of customers, one in particular, who hurled vulgar, sexist and ageist obscenities at the strikers.

However, she said the striking workers were overall heartened at the support they received last Thursday from the public. When The Nationalist visited the strike picket last that morning, the strikers were being  greeted with honking horns of support from many passing drivers and messages of support from passing pedestrians.  Most vehicles that approached the service station drove on rather than pass the picket.

Gardaí were called to the strike picket last Thursday afternoon after receiving a complaint that the strikers weren’t observing Covid-19  restrictions. A Clonmel Garda Station spokesperson said gardaí found no evidence of Covid-19 restrictions being flouted when they went to the shop.

Ms Dillon stressed the strikers were very careful about observing Covid-19 restrictions. “Everyone was wearing a mask and social distancing was being observed. As a union, we represent retail workers who put their lives on the line every day. We would be very particular about this.”

The dispute dates back to early October when   Mandate contacted the company  and informed it that staff, who were members of the union, were seeking discussions on their terms and conditions.

She said  the owner  refused to engage with Mandate despite all the union’s efforts to engage with him by letter, email and phone. The union served notice of strike action ahead of the statutory seven-day notice period but it was ignored.

“This isn’t anything that anyone wants to do but we have been left with no other choice,” said Ms Dillon.