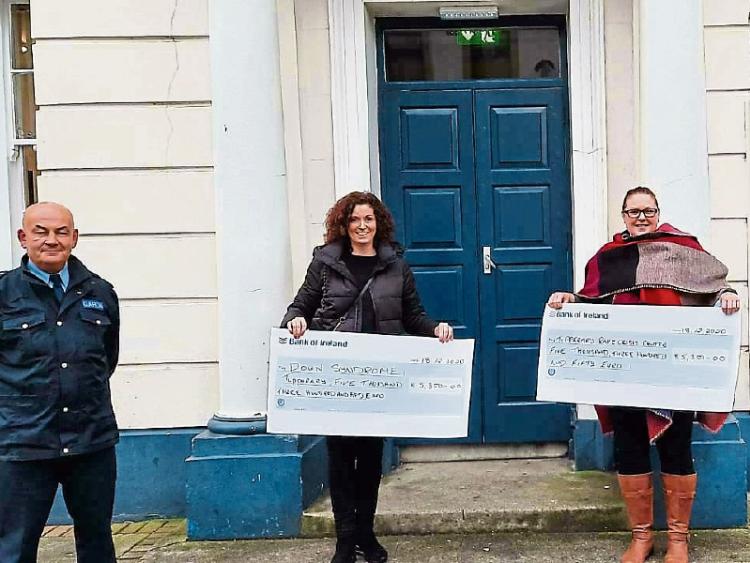 Sgt Kieran O'Regan of Clonmel Garda Station pictured with Anne Marie Keane of Down Syndrome Tipperary and Natasha O'Keeffe of Tipperary Rape Crisis Centre with the €5,250 proceeds from the concert

Two Tipperary charities have received a welcome €10,700 funding boost, thanks to a charity concert organised by Clonmel District gardaí last March just before the Covid-19 pandemic hit the country.

The funds were the proceeds of the gala charity concert starring the Garda Band and a range of local performers that took place at Hotel Minella on March 4 last.

Garda Commissioner Drew Harris and his wife Jane were the special guests at the show, which was attended by close to 400 people.

It was the fifth annual Clonmel District Garda charity concert headlined by the Garda Band and the first year it was staged in March. It was previously a pre-Christmas event.

Apart from the Garda Band, the large audience at the Minella Hotel was entertained by the New Inn Voices Choir and Cork tenor Eric Patrick Nolan.

Fr Jim Purcell, who is based in Thurles, and Garda Supt Eddie Golden, who was formerly based at Cahir Garda Station, also performed.

Down Syndrome Tipperary volunteer Anne Marie Keane said they were delighted to receive the €5,350 cheque, as all their work is voluntary.

She said the money will go towards the renovation of a premises at Abbey Road in Thurles into a centre for the charity’s members and their families throughout the county. When completed the centre will host therapies, classes and other supports for people with Down Syndrome and their families.

Natasha O’Keeffe of Tipperary Rape Crisis Centre said the proceeds they received from the concert will go towards the refurbishment of the centre’s counselling facilities.

She thanked the gardaí of Clonmel Garda District for choosing the Rape Crisis Centre as one of the fundraising beneficiaries of the concert, which she really enjoyed.

“It was an absolutely fantastic night. I was quite blown away by it,” she recalled.Clonmel Garda Superintendent Willie Leahy said they were delighted the concert was such a success and raised so much for Tipperary Rape Crisis Centre and Down Syndrome Tipperary, which both do trojan work in the county.

He recalled how the concert was the last fundraiser and community event Clonmel District gardaí hosted before the Covid-19 pandemic put paid to such activities. The district’s annual senior citizens Christmas dinner and national schools hurling blitz didn’t take place last year due to the social distancing restrictions necessitated by the pandemic.

Supt Leahy said they hoped to continue with these events when the country comes out the other side of the pandemic.