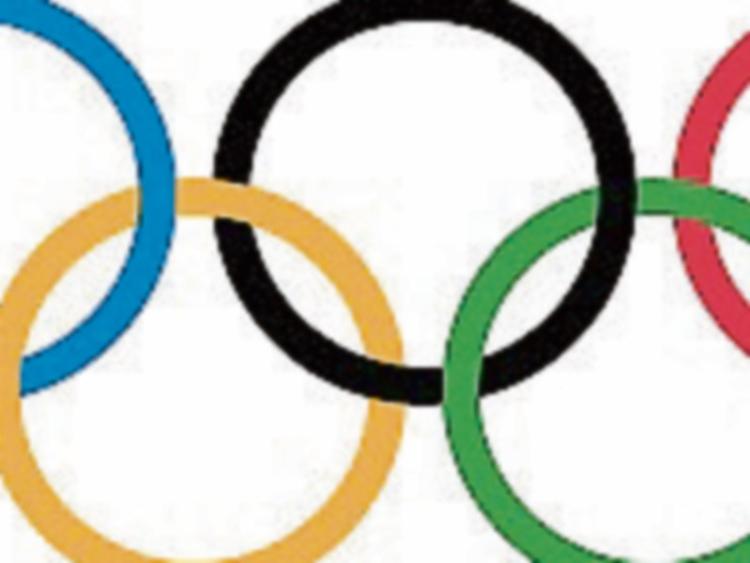 Hugh O’Callaghan presented the Irish Olympic flag to the Mayor of Clonmel, Sean Nyhan, in 1972

If it could be found, the Irish Olympic flag presented to a Clonmel man at the end of the Munich Games almost 50 years ago would be a great addition to the Tipperary Museum of Hidden History, according to sports historian and author Tom Hunt.

The flag was presented to Hugh O’Callaghan, who was weightlifting coach to another Clonmel man, Frank Rothwell, who represented Ireland in weightlifting in Munich in 1972, the last time that Ireland was represented in the sport in Olympic competition.

Hugh O’Callaghan, son of the legendary dual Olympic champion Dr Pat O’Callaghan, presented the flag to the Mayor of Clonmel, Sean Nyhan, at a reception held in the Town Hall in October 1972, and it was flown outside the Town Hall during the following week.

The Mayor thanked Hugh O’Callaghan “for transporting the massive 250 square feet of Olympic history” to Clonmel.

“The name O’Callaghan has been synonymous with many branches of sport for a long time and it was fitting that a member of that family should be given the signal honour of presenting the flag,” said Sean Nyhan.

“The Olympic flag, which was presented by Mayor Tröger of the Olympic Village through the person of Hugh O’Callaghan, stood outside the main stadium during the games.

“The flag is the only one of its kind in Ireland and the only one to be presented to the people of any town or city, except the city of Mexico which held the games in 1968 and Montreal, which will hold them in 1976.”

Clonmel had a memento of the Olympic Games in Munich that was the envy of every town and city in Ireland and further afield, the mayor added.

Tom Hunt, who is originally from Clonea Power near Carrick-on-Suir and now lives in Mullingar, takes up the story of how the flag ended up in Clonmel.

“The closing ceremony at an Olympic Games is one of the special occasions of international sporting competition,” he says.

“The athletes who represented Ireland in 1972 missed out on this special occasion, as they boarded an Aer Lingus flight home on the day of the ceremony.

“The decision of the International Olympic Committee (IOC) executive board to declare September 6 1972 a day of mourning to honour the memory of the Israeli athletes massacred by the Palestinian terrorists at the games meant that the closing ceremony was rescheduled for Monday September 11, the date on which the Irish team were scheduled to return.

“As a result, the Irish team missed the opportunity to take part.

“However one of those involved stayed behind. He was the weightlifting coach Hugh O’Callaghan, the coach to another Clonmel man, Frank Rothwell, who represented Ireland in 1972 at weightlifting, the last occasion Ireland was represented in the sport in Olympic competition.”

Tom Hunt says that Hugh O’Callaghan believed that the Irish management were responsible for “an ethical error in not leaving at least one person behind to carry the flag”.

“In his opinion, the absence of an Irish representative was ‘a terrible mark of disrespect to the German people, particularly since they had gone through such tragedy at the Games’.

“He believed that simple protocol, diplomacy and good manners would have dictated leaving an Irish Olympian to carry the flag.

“He decided not to return with the team and contacted the Mayor of the Olympic Village, Walther Tröger (who died last New Year’s Eve, at the age of 91), later an IOC member and president of the National Olympic Council (NOC) of Germany, and declared his availability to carry the Irish flag at the final event.

“A German official had been designated to carry the Irish flag and when Hugh O’Callaghan reported to the stadium he relieved the designated official of his Irish flag-carrying duties,” says Tom Hunt.

Coincidentally, Hugh O’Callaghan’s father Dr Pat O’Callaghan carried the Irish flag at the opening ceremony of the 1932 Olympics in Los Angeles, when he won his second gold medal in hammer throwing.

Later in the week Walther Tröger presented Hugh O’Callaghan with one of the large flags that had flown outside the Olympic Stadium.

The green and white flag with the intertwined Olympic rings and the Munich emblem was later presented to the Mayor of Clonmel, Sean Nyhan.

“The question is, where is the flag now,” says Tom Hunt.

“If it was found it would be nice to have it on display in the museum in Clonmel, considering the Tom Kiely-Pat O’Callaghan Olympic connection with Tipperary,” he says.

Tom Hunt was commissioned to write the history of the Olympic Council of Ireland, a book that has yet to be published.

He holds a doctorate in history and his PhD was completed on the topic Sport in Westmeath 1850-1905, which was published in his book entitled Sport and Society in Victorian Ireland: The Case of Westmeath, published by Cork University Press.

A former classmate of Carrick-on-Suir man Billy Kennedy, who served on the Olympic Federation of Ireland for 28 years until his retirement last December, Tom Hunt’s other works include The Little Book of Irish Athletics, The Little Book of Waterford; and Portlaw, Co Waterford, Portrait of an Industrial Village and its Cotton Factory, 1825-1876.