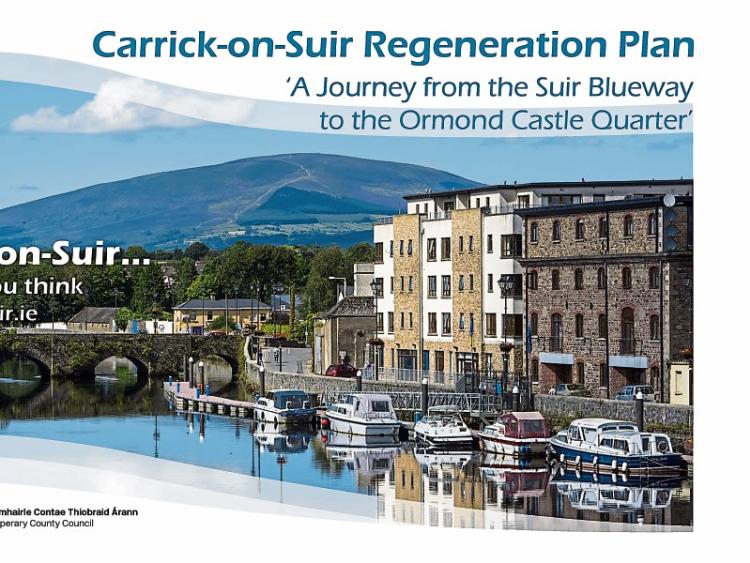 Tipperary County Council has begun a public consultation process seeking the input of Carrick-on-Suir businesses and residents into the design for the town’s proposed regeneration scheme.

The council received a €365,625 Rural Regeneration Fund grant last June toward the €487,500 cost of  devising the design for the regeneration.

A public consultation process is now commencing seeking the public’s views on what improvements to the town’s infrastructure should be included in the design.

Carrick-on-Suir Municipal District’s Director of Services, Brian Beck, told the monthly meeting of the MD’s councillors that the council wants to get the people of the town involved in submitting ideas.

He said the council has developed a  website and published  flyers with  information on the RRDF project, the public consultation process and  issues in the town the funding is trying to address.

The website: www.yourcarrickonsuir.ie went live this week (Tuesday, March  9).   It features a  survey   inviting  the public to answer a series of questions about what they think is needed to improve Carrick-on-Suir.

The public will have four weeks to complete the survey which  seeks ideas under five headings. They are:

1) improving the link between Ormond Castle and the town; 2) the Sean Kelly Square public realm enhancement; 3)   a location for the town’s second digital hub providing work spaces for small firms, entrepreneurs and remote workers; 4) improving the link between North Quay and Carrick-on-Suir Heritage Centre; 5) linking Sean Healy Park and Suir Blueway with the town centre and Ormond Castle.  Mr Beck pointed out that this public consultation process will be one of three opportunities the people of Carrick-on-Suir will be given to voice their views on the regeneration scheme’s design. There will be  a fourth opportunity when the final design is submitted for Part 8 planning approval.

Mr Beck said posters advertising the RRDF public consultation process will be erected at Carrick Post Office, Credit Union and local shops to get the message out to the people of the town.

The information flyer  is to be sent to local businesses, community groups, schools and other stakeholders with an interest in Carrick-on-Suir. He invited councillors to suggest ways the council can contact local people and encourage them to fill out the survey.

Carrick-on-Suir Municipal District chairman Cllr Kevin O’Meara (Ind) welcomed the public consultation process and said the proposed scheme will certainly regenerate the town and district. “It’s a super project. Hopefully it will gain momentum and come to fruition. I look forward to being part of it,” he said.

Carrick-on-Suir councillors, Kieran Bourke (FF) and David Dunne (SF), were also full of praise. Cllr Bourke said the information flyer was fantastic and he loved the fact the council has decided to get everyone to have their say on the regeneration scheme’s design.

“There are exciting  times ahead for the town of Carrick-on-Suir. I am delighted to be a part of it and my door  is open for any assistance I can give to you.”

Cllr Dunne described the regeneration scheme as a “game changer” for Carrick-on-Suir and he one hundred  per cent supported the project.  He said it was important that as many people as possible engage with the public consultation process.