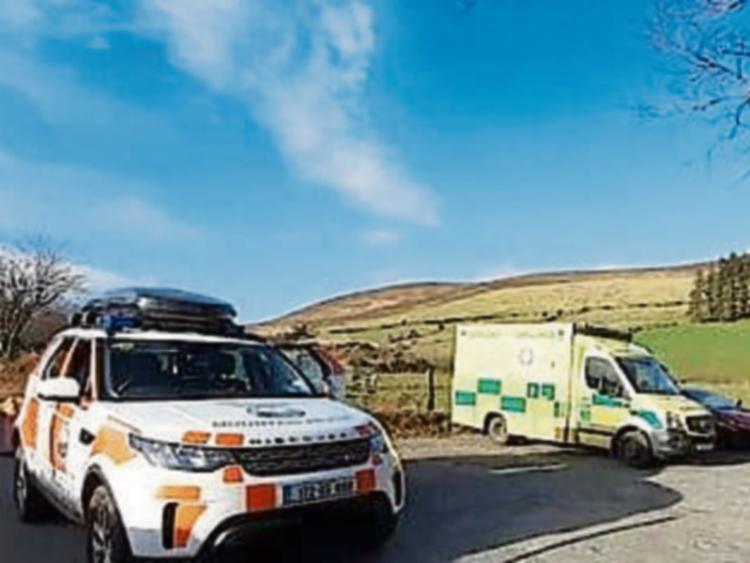 The SEMRA team vehicle and an ambulance involved in the Galteemore rescues yesterday (Wednesday, March 17)

The first incident happened at lunchtime yesterday (Wednesday) when a woman fell in strong winds and injured her head at the cross on Galteemore.

While the injured walker was alert and conscious, a member of the group she was with, who had emergency medical technician training decided to call the emergency services in case her condition deteriorated.

South Eastern Mountain Rescue spokesperson said a team of of their volunteers set off on foot from the Black Road car park within 45 minutes of the initial call-out.

“Although the weather was warm and sunny at lower levels, there were strong gales and thick fog on Galteemore,” the spokesperson said.

The SEMRA team reached the walker shortly after 3pm and escorted her and her fellow walkers group off the mountain with the help of other SEMRA hill parties and the SEMRA team vehicle. When they reached the Black Road, the woman was assessed by the SEMRA team doctor and taken by ambulance to hospital

As SEMRA team members were descending Galteemore, they were approached by another walking group as one of their members was complaining of chest pains. SEMRA members assessed the woman and stayed with her and the group until the SEMRA team doctor arrived.

“The casualty was then escorted down as far as the team vehicle and brought to the Black Road where they were transferred to the National Ambulance Service ambulance.

“All team members were safely off the hill by 5.50pm. We wish the two casualties well and hope they make a full and speedy recovery.”