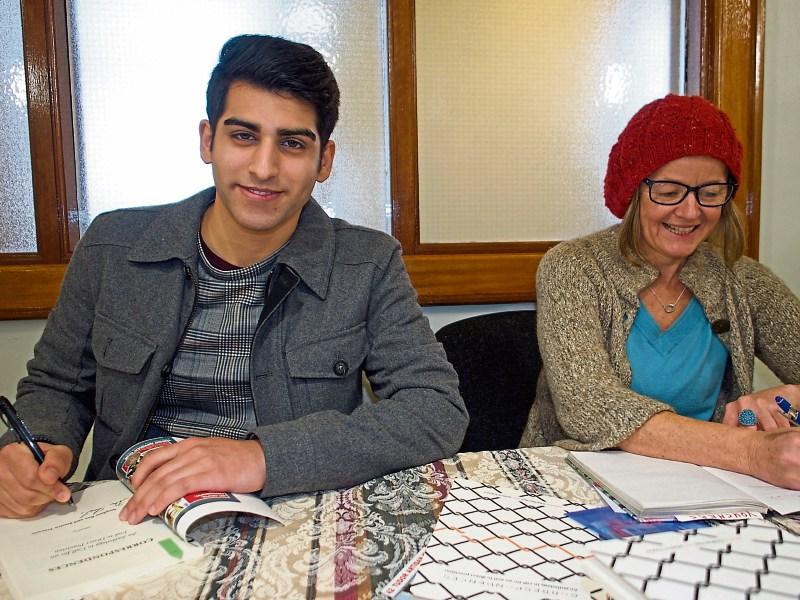 Rehan Ali with Linda Fahy of the Tudor Artisan Hub at the Carrick-on-Suir launch in 2019 of the short story anthology Correspondences, which featured his story about living in direct provision.

A short film about a teenage direct provision centre resident’s experience of an Irish town, is to be shot in Carrick-on-Suir this summer.

Rehan, who was born in Pakistan, says he wants to shoot the film in Carrick-on-Suir where  he spent 10 years living in Bridgewater House Direct Provision Centre as this  is where he developed his love of film making.

The final year neuroscience student at University College Cork is one of two young filmmakers to share the €60,000 prize in the short film competition run in association with Screen Ireland. The competition attracted more than 600 entries and Rehan’s script treatment, which is the idea for the film, was one of ten shortlisted finalists.

He and the other finalists had to pitch their proposals to a heavyweight judging panel that included  director and screenwriter Lenny Abrahamson, who directed Normal People and Oscar nominated film The Room; Derry Girls creator and The Deceived screenwriter Lisa McGee, actor Niamh Algar, who stars in Ridley Scott’s new  series, Raised by Wolves; screenwriter and executive producer Ursula Rani Sarma, whose work includes Delicious and Red Rock.

Rehan, who now lives in Fermoy, county Cork, was announced as one of two joint winners of the competition on a special episode of Virgin Media Television’s Box Office show on Sunday, March 14.

Rehan says Water Under The Bridge is about a black teenage immigrant who comes to live in a direct provision centre in an Irish town with his father and baby sister. The plot centres on his adventures when he decides to sneak out of the hostel and meets other young people living in the town.

“It’s a coming of age story from the perspective of a young immigrant,” the former student of   Carrick-on-Suir’s Edmund Rice Secondary School  told The Nationalist.

“When we think of immigrants, we think their journey ends when they get to their place of refuge. The film really takes that on. It focuses on the challenges he must face.”

Rehan stresses that while he drew from his own personal experiences as a young immigrant living in  direct provision,  Water Under The Bridge  is fictional and not in any way based on his own story.

He lived in  Carrick-on-Suir’s direct provision centre from the age of 6 to 16 after his mother brought him and his two siblings to Ireland to escape the tense political situation  and recession in Pakistan.

During his years in Carrick-on-Suir, he was involved in  Foróige  and in  arts and film projects at the town’s Tudor Artisan Hub. His family secured their Irish citizenship in 2015 and moved to Fermoy but Rehan has maintained his links with Carrick that had such an influence on his formative years. Rehan said Tudor Artisan Hub founder Linda Fahy and Carrick-on-Suir creative writing teacher Margaret O’Brien assisted him with writing the script for Water Under The Bridge.

The 22-year-old has also been learning about film making from    Oscar winning film producer David Puttnam, whose films include Chariots of Fire, The Mission, The Killing Fields and Midnight Express.  Last October he was selected as one of UCC’s eight Puttnam Scholars and has  attended a series of  seminars on film given by Lord Puttnam at the university.

Rehan  will start pre-production work on Water Under The Bridge  straight away including choosing filming locations in Carrick-on-Suir, selecting the cast and fine tuning the script. The film will be shot during the summer after he finishes his final exams and he aims to have it completed in August. He is hoping to feature some new acting talent in the film and would love to find someone living in the direct provision system to play the lead role.   It  will be  shown on Virgin Media television and  on demand platform and screened at the Dublin Film Festival.