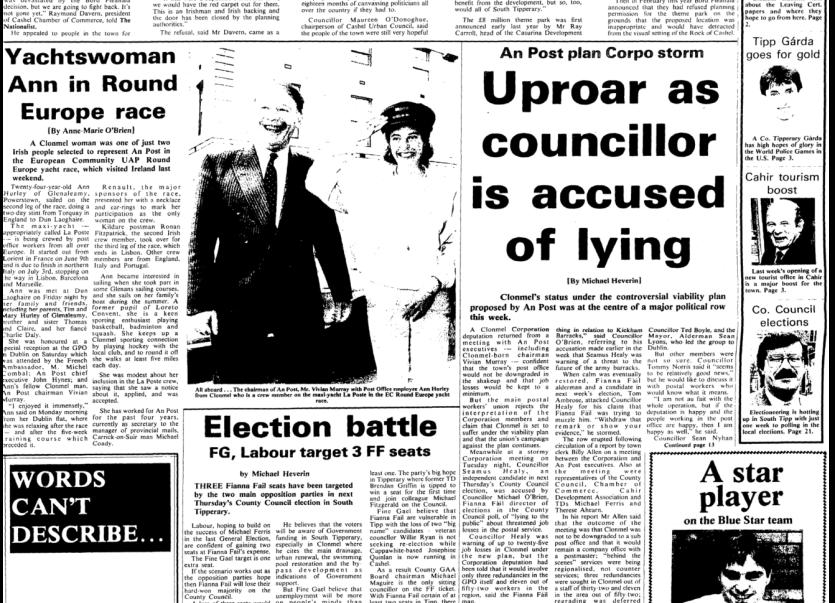 Thirty-years-ago on June 22, 1991, our main front page story related to a viability plan proposal by An Post at the time which threatened to downgrade Clonmel’s Post Office.
At a stormy Corporation meeting, covered by staff reporter Michael Heverin, Cllr Seamus Healy - at the time an Independent candidate in an upcoming General Election - was accused by Cllr Michael O’Brien, the Fianna Fáil director of elections of “lying to the public” about threatened job losses in the postal services.
Also that week, we carried a front page story of a Clonmel woman, Anne Hurley, of Glenaleamy, Powerstown, just one of two Irish people selected to partake in a Round Europe yacht race, which visited Ireland that weekend. Our front page photo showed Anne, a crew member of the maxi yacht La Poste, being greeted by chairman of An Post, Vivian Murray in Dublin. Mr Murray himself was originally from Clonmel. Anne was also greeted by her parents Tim and Mary and by siblings Thomas and Claire and her fiancé, Charlie Daly.
Eamonn Lacey wrote that week that developers of the €8 million national historic theme park for Cashel were determined to succeed in their search for an alternative site to ensure the project was not lost to the town. In the end, the project never did get the go-ahead.