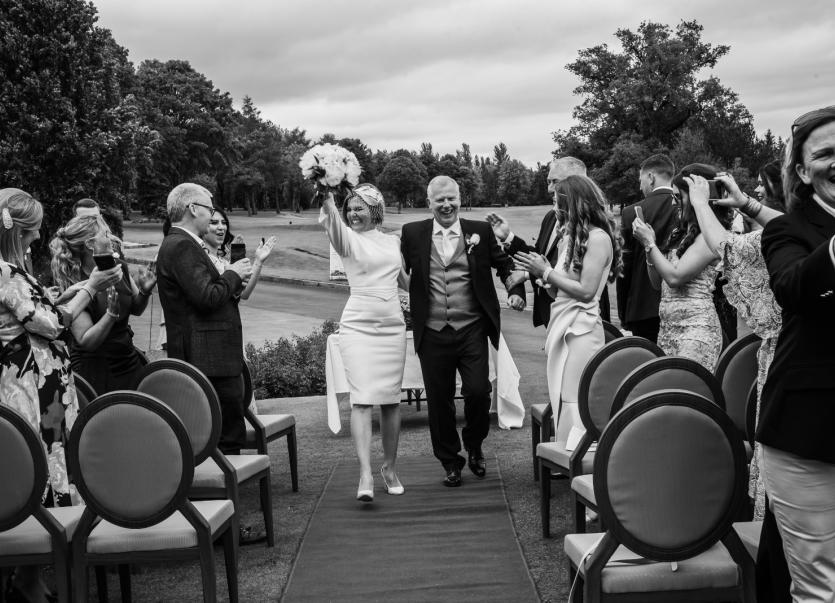 A spectacular performance on the championship tee is a must for Dundrum Golf Club captain, Tony Reade, and he pulled it off with considerable aplomb on Monday.
Tony’s championship tee delivery was flawless as he married his bride, Elienne Souto, in a civil ceremony attended by a small group of family and friends.
All golf action was suspended to allow the popular club captain to tie the knot.
“Monday was the first time that you could have 25 at a wedding because restrictions were eased and we decided to just go for it,” said a delighted Tony.
Tony has been playing golf at Dundrum for the last 20 years since he moved from Dublin to Cashel to live.
He took on the role of club captain in December and on Monday ensured the club had an occasion with a difference to remember.
Elienne is from Brazil and she has been going out with Tony for the last five years.
She moved down from Dublin to Cashel to live before Christmas.
Elienne has no interest in golf but has no fears about Tony spending too much time on the golf course.
“I have my own hobbies and Tony has his golf. We will find a happy balance I am sure,” said Elienne.
GOLF CAPTAIN
When her husband to be and golf captain suggested getting married on the Dundrum course Elienne was in full agreement.
“Maybe it is unusual but not for Tony,” said Elienne who said she loves living in Cashel since she moved down from Dublin.
“The town is lovely and the people are very friendly. Everything here is so nice,” said Elienne.
Tony said the wedding was scheduled to take place on April 26 but because they would only be allowed six guests they decided not to go ahead with it on that date.
They opted for the Bank Holiday Monday when they realised the restrictions on wedding numbers would be eased.
“Because the ceremony was outdoors we would have been allowed 50 but we decided on 25 because that is all you would be allowed for the reception and we did not want to have to turn away 25 people,” said Tony.
Meanwhile, the couple went on their honeymoon to county Kerry.
“We decided on Kerry, we have a few places booked down there and hopefully we will get the good weather,” said Tony.