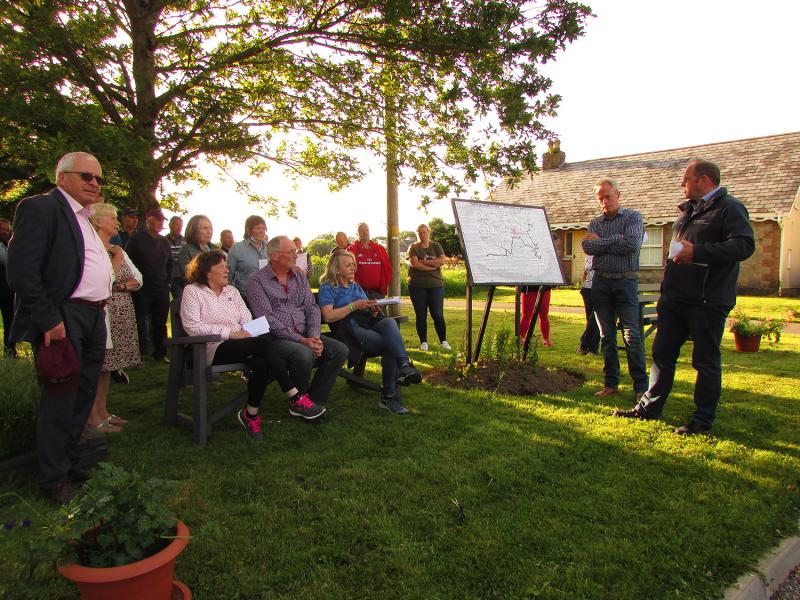 Residents of a rural Tipperary community are shouting stop to a proposal to erect a 15m high telecommunications mast in the heart of their village with the county council receiving more than 60 objections to the planning application.
Mobile phone and broadband service provider eir’s controversial planning application seeking permission to build the mast at the eir exchange site at Graigue, New Inn has been the subject of several outdoor public meetings at the village’s grotto since the application was lodged with Tipperary County Council on May 14.
The public meetings have led to the lodging of 64 written submissions/ objections to the proposed mast with the council by last Thursday, June 17, which was the deadline for such submissions..
Independent TD Mattie McGrath, local councillors Andy Moloney (Ind), Máirín McGrath (Ind) and Michael Fitzgerald (FG) and New Inn Tidy Towns Committee are among those who have lodged submissions.
The main concerns of residents and local politicians’ main concern is the mast would be located too close to the village’s homes, businesses and national schools.
Eir, meanwhile, says in a letter accompanying the planning application that this mast is needed in order for the company to fulfil its requirement to significantly improve its mobile phone and broadband service provision to New Inn and to facilitate “site sharing” with third party operators from within its New Inn telecommunications exchange.
The council is due to decide on July 8 whether to approve, reject or seek further information on the planning application.
Cathy and Gerard Moloney live next door to New Inn's eir Exchange and will be the residents most affected if the mast goes ahead.
Cathy is concerned about the visual impact of the mast on her home and the rest of the village and fears the mast would devalue her home.
“We are at a stage of life where we are moving to downsize but what would we get for the property with a big steel mast and enclosure next to it.
“The county council has done a lot of work in New Inn such as putting in traffic calming measures. It’s a nice little village and I fear this mast would discourage people coming to the village. It would be an awful eye sore.”
She fears if the mast is erected other telecommuniciations structures will be co-located on it further down the line.
Cathy also fears there is a possibility the mast will adversely impact her health and the health of the village’s other residents, though she acknowledges there is no proof that these masts negatively affect public health.
Independent Cllr Andy Moloney from Poulmucka agrees with Mrs Moloney’s concerns about the proposed mast.
“We all need good broadband and mobile phone coverage but this is going to be a contraption right in the middle of the village.
“It’s just the wrong place totally for it. There are two poles there already. It’s going to be unsightly in a residential area and there are some protected structures such as the old barracks nearby.”
He believes erecting this mast will undo a lot of the good work the local community has done in recent years to improve the appearance of New Inn that has resulted in the village achieving substantial increases in its Tidy Town competition marks.
Cllr Moloney also pointed out that while the World Health Organisation concluded there was no public health issues with these masts, a lot of people are still concerned about possible health implications of living very close to one.
The Nationalist contacted eir for a comment but received no response. However in its covering letter submitted with the planning application, the company explained that eir’s 4G coverage in the New Inn area is “deficient” and this mast will bring improved coverage and capacity to all residents and businesses in this community.
It argues that the eir exchange in New inn is under-utilised and it considered the site suitable for this structure as it has been used for telecommunications for many years.
New Inn is not the only Tipperary village where residents are revolting against a proposal to locate a telecommunications mast in their midst.
At Tipperary County Council’s monthly meeting last week, a number of councillors highlighted public opposition to eir’s planning application for an 18m telecommunications mast at the eir exchange building at Kilcooley Way, Gortnahoe. Like New Inn, an outdoor public meeting of residents concerned about the application has taken place in the village.
Cllr Sean Ryan from Littleton said it was proposed to locate the mast beside the beautiful houses at Kilcooley Way and local residents were “beside themselves with worry”. He called on the council not to allow masts to be erected beside housing.
Cllr Jim Ryan from Thurles said the size of the mast proposed for Gortnahoe was “really appalling” and there was “tsunami” of these applications coming to the council.
He said the council needed to come up with a policy in relation to the location of these masts and he called on TDs to ensure national policy precluded these masts from being located near schools and playgrounds.
Nuala O’Connell of Tipperary County Council's planning section responded that the council was not going to comment on specific planning applications.
“We assess them in the context of national guidelines and all submissions (from the public) will be taken into account in the planning process,” she explained.