Tipperary publicans 'sick to death of it all' as Government can't see beyond the 'Red Cow'! 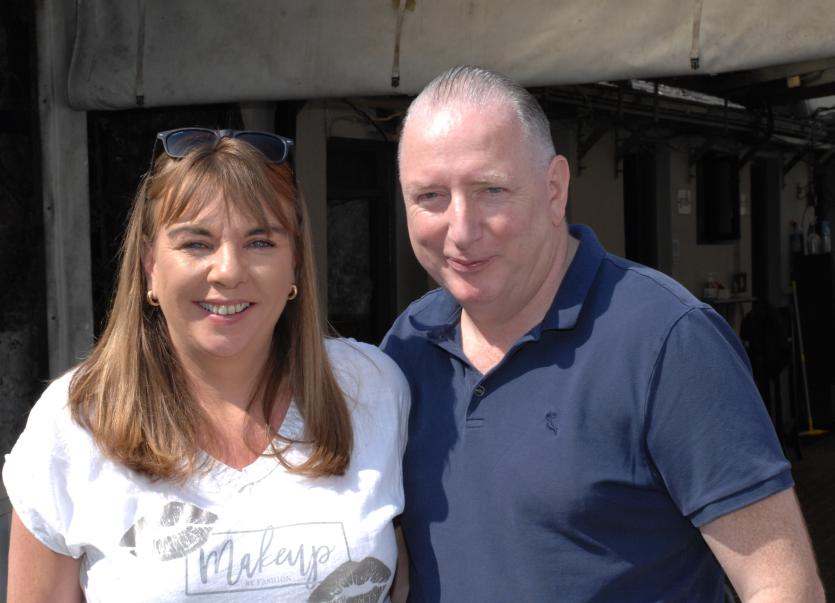 Roseanne and John Carroll, proprietors of Lonergan’s in Fethard

The Government’s shock decision last week to delay the full opening of the hospitality sector from Monday, July 5 to at least July 19, has once again stunned the food and drinks industry and left the vast majority of restaurateurs and publicans nationwide hugely disappointed and in some cases quite angry.
Fethard couple John and Roseanne Carroll, who run Lonergan’s Restaurant and Bar at the top of The Square, are one such couple, clearly frustrated by yet another delay. The latest setback, precipitated by the onset of the Delta variant in Ireland, dashed all hopes they had of their pub reopening indoors on Monday last, a pub which now hasn’t served a pint of Guinness inside since the turn of the year.
“We are angry, why wouldn’t we be angry, we are bound to be angry,” began John.
“But we were not in the slightest bit surprised by it. We were saying it all along that the Government was going to pull the plug on this again and they did. They are like a crowd of headless chickens. We are just fed up with it all now,” Roseanne quickly added.

STAGGERING FROM ONE SITUATION TO THE NEXT
According to John, “the biggest disappointment with that announcement last week is that there seems to be no forward plan attached to it. The Government really doesn’t seem to know what’s happening. They seem to be staggering from one situation to the next without any real plan in place. There’s a postponement now until July 19 but even at that we don’t know if we are going to open then,” said John.
“If you look at the people making these decisions, none of them have suffered. There’s none of them on the PUP. None of them know what it is to have a business and about trying to make it work. And when you see politicians giving themselves pay rises during the pandemic, talk about kicking people when they are down. I mean they seem to be just so far removed from the ordinary person in the street that it beggars belief,” he added. 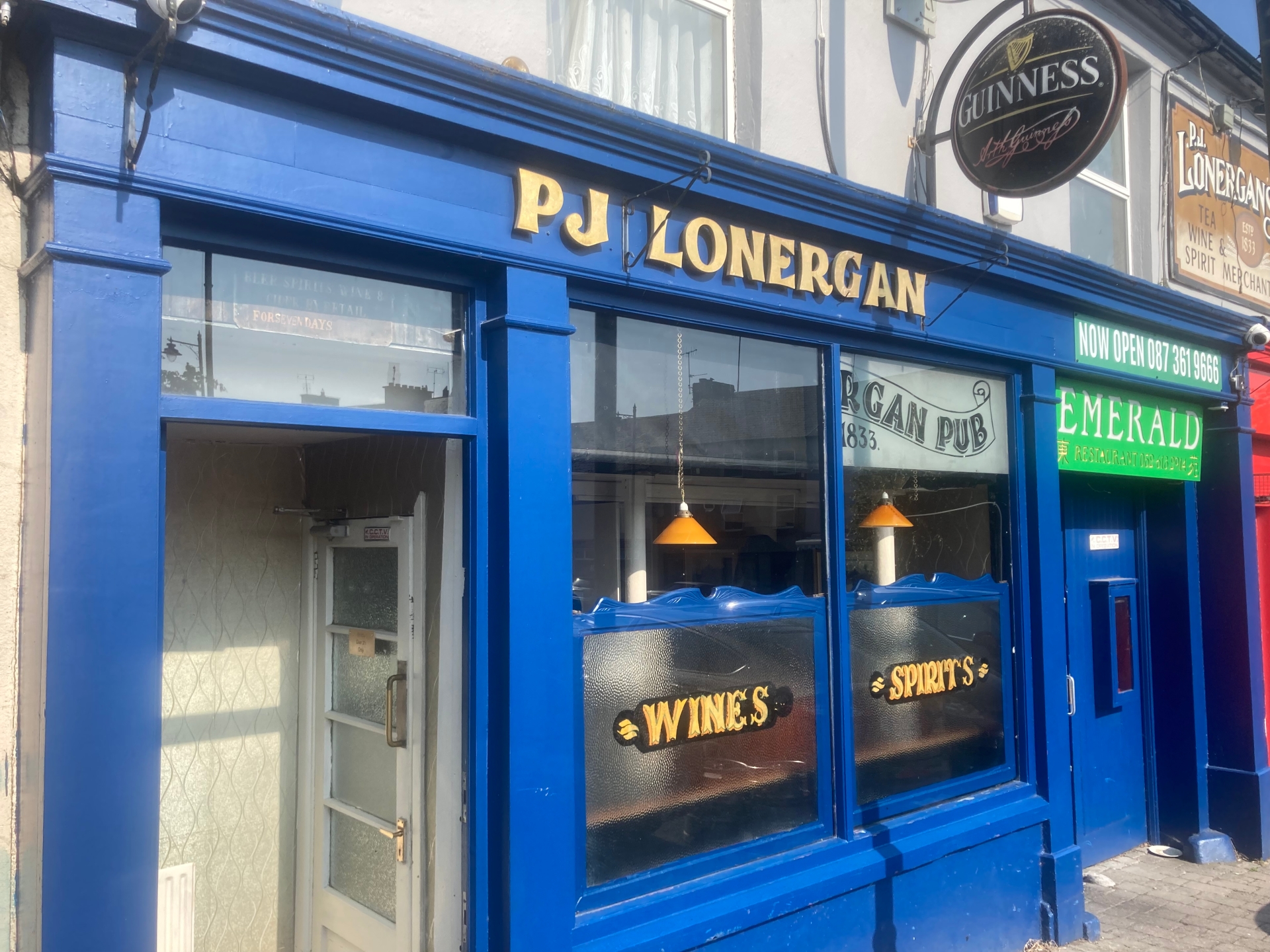 Lonergan's Pub at The Square, Fethard. Proprietors John and Roseanne Carroll say that the Government "don’t seem to see beyond ‘The Red Cow’, when it comes to making decisions that affect rural Ireland.

“We are sick to death of it all at this stage. They brought in the €9 meal before. Did Covid realise that someone was after eating €9 worth of food. It was bonkers that rule. It made us the laughing stock of Europe. And what will they think in time when they look back in history at the €9 meal. It was crazy,” said Roseanne.
John, who together with Roseanne, runs one of just five licensed premises now in Fethard, continued:
“We are going to have to live with this virus on an ongoing basis for the next couple of years. You can’t keep shutting industry down, you can’t keep shutting the economy down, you can’t keep shutting businesses down left, right and centre. You are going to have to devise a way forward where we can all live with it. I mean they are trying to do it in Europe but we are so far behind Europe in every decision. We stutter through everything here. There’s no real decision making, everything is so laboured,” he said.
There have been lots of decisions made since the pandemic began which at times seem unfair and quite illogical even, and the fact that hotels have been operating indoors since June, while others continue to be excluded from operating is just one of them.
“Like we have nothing against the hotel industry per se, they have suffered like everybody else. But why should they be singled out and can allow people in, while restaurants and bars cannot. What’s the difference, can somebody please explain that properly to me because I do not get it,” said John, who has been working in the hospitality industry for over 30 years now.

WHERE IS THE FAIRNESS?
“And it’s unfair also,” he continued, “in so far as if you have the money and can afford to do it and go and stay in a hotel on vacation you can have your indoor dining and your indoor drinks. But there’s a lot of people who are still on the PUP payment in this country and they haven’t got the money to do that. On the other hand the only thing we can do here with our restaurant and with our pub is to serve drinks outside. Where is the fairness of that?,” he asked.
“Some of those decisions they’ve made have been absolutely shocking. The €9 meal rule that Roseanne mentioned, that in itself drove a wedge between pubs which had food and the so-called ‘wet pubs’ who didn’t serve food. We were fortunate enough here that we were able to open and serve the €9 meal, but at the end of the day that decision left a sour taste in the mouths of a lot of publicans. It was a divisive way of doing things and in the end it divided people,” said John.
The Carrolls are now nearly 20 years in business at Lonergan’s having opened in 2005, and Roseanne has never seen the industry in such a poor state.
“The Government created different groupings in the hospitality industry, the hotels, the food pub, the ‘wet pub’, the restaurant. And I think that’s what they wanted to do from the start because if all groups were singing from the one hymn sheet it would have been a more powerful lobby for them to deal with. It was their way of quieting the industry,” said Roseanne.
“The industry is now on its knees. The Government has given us the CRSS but that is only helping to maintain the building. I had to keep public liability insurance up even for the time we were closed, no customers in the place and still we had to pay it. What the Government was giving us on the one hand we were giving back out to maintain the building, pay electricity, keep the broadband, and everything else like that. All these bills keep coming in with absolutely no revenue coming in,” Roseanne pointed out.

PURE BALDERDASH
She continued: “The Government saying that we were all in this together is pure balderdash. They were never in this together. They took no hit. Everyone else in the country was hit, the young with college and their social lives, the music industry which has been almost wiped out, and many others.”
“And now they are expecting the young people to go in and serve those indoors who have had their vaccination while they themselves are still waiting to be vaccinated. It’s completely double standards. In two months’ time we could have another variant, are they going to close us all yet again, is that what we are looking at into the future?,” added Roseanne.
Bemoaning that lack of clarity in the Government’s decision-making Roseanne drew attention to the problems and obstacles that have to be overcome before a publican can open his or her doors again after a lockdown.

BEYOND THE RED COW
“Take the pubs that have no gardens, the ones that were supposed to be opening on Monday. They would have been ordering their stock before the Government announcement was made, ordering it last week or the week before that. They would be getting ready to re-employ staff, etc. All these things have to be done to reopen, it just doesn’t happen overnight and the Government failed to provide clarity once again. They don’t seem to see beyond ‘The Red Cow’,” vented Roseanne.
Finally, Roseanne turned to the contentious issue of a possible Corona Card being introduced here which might allow vaccinated people and those recovered from Covid access to indoor dining.
“Regarding the Corona Card, how do we scan somebody’s details? Even if they do have this green card, and the QR code. We don’t have the facilities to scan those and most pubs don’t either. So how will that operate? This is a small country pub. We are not in Dublin or some of the other big cities where you have hundreds and hundreds of people coming through the door. I know everyone coming through my door, I know them all my life. Maybe that system might work in the big city pubs, with their own IT systems, but for most pubs it just won’t work ,” Roseanne pointed out.
“As it stands we keep a register of everyone who comes in here to sign for contact tracing and also we get a telephone number from them. At the moment I’m not obliged to ask them whether they’re vaccinated or not, and I couldn’t see how it could be ethical for me to be asking a question like that, I’m not a doctor, I’m not a nurse,” concluded Roseanne.
Almost a year and a half now into this Covid-19 pandemic in Ireland we still have a long way to go before normality returns. The country seems to have more questions now than answers and also plenty of angry restaurateurs and publicans out there seeking clarity on the way forward.