People encouraged to have their say on ambitious plans

Two bridges for pedestrians and cyclists that will cross the River Suir are planned for Clonmel.
The Suir Island Infrastructural Links project also proposes to develop a public plaza at the southern end of Sarsfield Street, from where a proposed foot and cycle bridge will span the River Suir to Suir Island.
A raised walkway will cross the island before leading onto a second proposed bridge, also for pedestrians and cyclists, that will cross the river to Raheen Road and Denis Burke Park.
An access ramp will be provided to provide access to Suir Island.
The District Mayor of Clonmel, Michael Murphy, described it as “an ambitious project that opens up the green heart of Clonmel that is Suir Island, and realises the potential of Clonmel’s green heart”.
He said it would involve the complete reimagination of the lower Sarsfield Street/Suir Island/Raheen Road area.
Connectivity between Denis Burke Park, Suir Island and the town centre, “our core retail area,” was very important, he stated.
Cllr Murphy encouraged people to engage in the public consultation process that will be ongoing for the next few weeks.
Three route options have been developed for consideration and people are invited to provide their views, comments and observations to Tipperary County Council before the closing date of Friday, August 27.
People may log onto the following link for access to a presentation on the proposed route options, along with a feedback form for comments and observations - https://www.innovision.ie/suirisland
The plans may also be viewed at Clonmel library in Mick Delahunty Square.
The county council says that these proposed public realm improvements are intended to create a safe public space for all, while improving connectivity for pedestrians and cyclists.
“It is expected that the scheme will encourage cycling and walking among young people as they travel between home, school, sports clubs etc., as well as providing an attractive commuter route,” according to a council statement.
“This scheme will also provide improved accessibility to Suir Island car park and its existing amenities, as in the medium to long term Tipperary County Council intends further developing Suir Island as a community amenity and recreational resource for Clonmel.
“This is an exciting development for the town of Clonmel and this is your opportunity to have an influence on the design of one of its key infrastructural elements.”
Clifton Scannell Emerson Associates Consulting Engineers, dhb Architects and Mimram Architecture Associés have been appointed as the designers for the project. 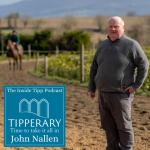 PODCAST: ‘It was fairytale stuff buying the two winners on the same day,’ says Nallen

Check this out!
ADVERTISEMENT - CONTINUE READING BELOW