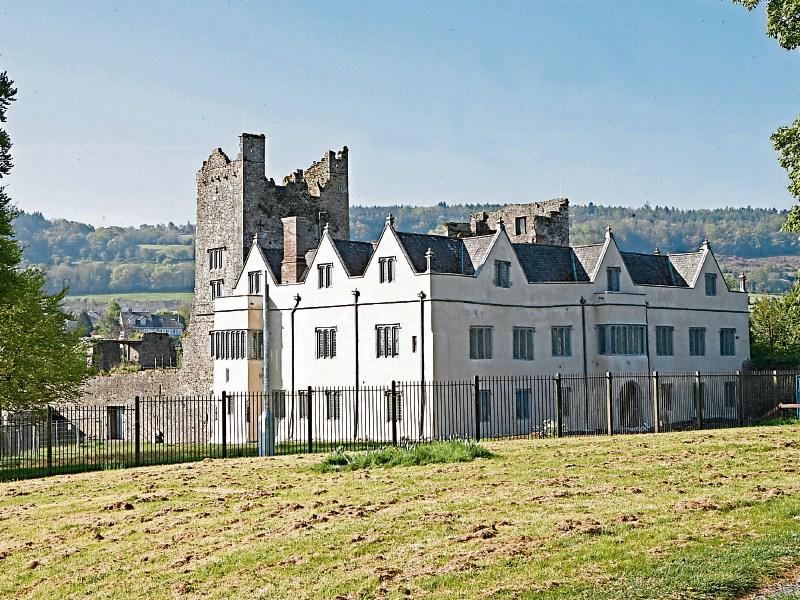 Carrick on Suir's Ormond Castle with the Castle Park in the foreground. Picture Anne Marie Magorrian

Councillors have approved a plan to revamp Carrick-on-Suir’s Ormond Castle Park into an amenity more attractive to wildlife and people.
The Part 8 planning application to transform the 1.72 hectacres park under the Ormond Castle Park Ecological and Amenity Improvement Scheme was unanimously approved by Carrick-on-Suir Municipal District’s elected members at their monthly meeting.
Tipperary County Council must now apply for funding to implement the design for the new look Castle Park, which aims to turn it into a paradise for pollinators with the planting of a wildflower meadow, more native trees and hedging.
The planning application proposes the following changes to the park:
1. Resurfacing and widening the park’s main footpaths and replacing its public lighting with LED street lights that are bat-friendly.
2. Creating a new secondary looped footpath and links that will provide a continuous circuit around the park.
3. The creation of a “gathering space” in the vicinity of Ormond Castle’s entrance with a reinforced grass surface defined by a low native hedge, seats, cycle stands, a water bottle refill station and information board about the built and natural heritage.
4. The planting of semi-mature avenue trees along one side of the main footpath with columnar oaks to replace four existing trees.
5. Planting of native woodland on the eastern edges of the park, comprising a mix of whips with standard trees including oak, birch, holly, Scots pine, whitebeam, rowan and willow.
6. A heritage fruit and nut orchard and long grass meadow is proposed for the park’s western boundary.The orchard and meadow would include rare and local pollinator friendly species such as hazelnut, chestnut, hawthorn, apples, pears, cherries and plums.
7. A short grass meadow west of the main footpath including the planting of a strip of wild daffodils along the edge of the path.
8. Long grass meadowland to the east of the main path including informal mown paths, deerpark sculptures and native wildflowers.
9. The distribution of habitat creation features such as bird and bat boxes, bug hotels and log piles throughout the part
During the public consultation process, the council received one submission from seven Castle Park residents living on the edge of the park. Overall the residents welcomed the proposals to improve the park but suggested a number of minor changes.
After considering their representation, the council’s planners agreed to amend the planning application by omitting the pathway link at the eastern side of the park between the proposed main footpath oval and relocated the proposed “woodland activity platform” and stepping stones to another location in the park north east of the possible future link route from the park to the Strand Walk.
Carrick-on-Suir’s Cllr Kieran Bourke, who proposed approval of the Part 8 planning application, complimented the council on the design for the park and for listening to the concerns residents raised with the council.
He said the council now had a lot of “shovel ready” projects planned and if they come to fruition it will be a great day for Carrick-on-Suir.
Fellow Carrick-on-Suir Cllr David Dunne, who seconded the application’s approval, echoed his colleague’s praise of the council’s plans for Castle Park.
He appealed to young people to respect the park and not engage in anti-social behaviour there. And he urged park visitors not to litter it and to clean up after their pet dogs if they foul there. “There is no point spending big money if we can’t get the little things right,” he told the meeting.