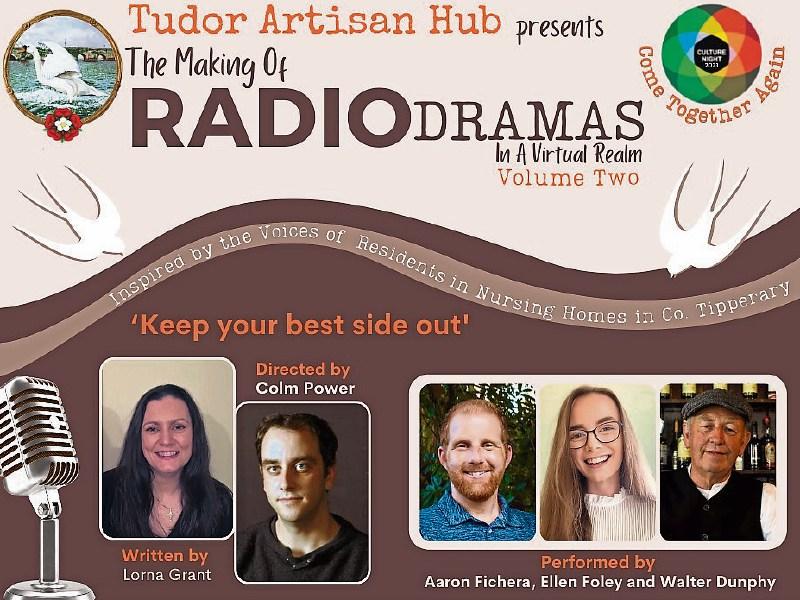 A poster for Keep Your Best Side Out, one of two radio dramas that will be broadcast for the first time on Culture Night

The plays titled: The Value of an Education and Keep Your Best Side Out feature the voices of Carrick-on-Suir actors and will be streamed on YouTube at 6pm on Culture Night.

They are the second group of radio plays funded under the Healthy Ireland Initiative’s Keep Well Campaign the Tudor Artisan Hub has produced this year in association with Margaret O’Brien, who runs the Writing Changes Lives creative writing workshops.

Like the first three radio plays premiered back in March, these latest dramas are inspired by  stories generously shared by nursing home residents in interviews recorded remotely during the third Covid-19 lockdown.

“The residents shared stories of difficult times and challenges overcome during a long lifetime, which offers us encouragement and inspiration to deal with our current very real challenges,” said Tudor Artisan Hub founder Linda Fahy.

“Thanks to Culture Night funding partners we now have had the opportunity to produce two more radio plays from these virtual recordings. The plays are professionally recorded by sound engineer Pete Smith. The Value of an Education is a play that shows how life comes full circle despite surprising detours along the way.

It is written by Clonmel born Joe Whelan, who runs a sheep farm and glamping tourism enterprise at the foot of the Comeragh Mountains and is a member of the Poetry Plus writers group in Carrick-on-Suir. Kilsheelanbased actress Suzanne Shine directs the play and also performs in it alongside fellow Brewery Lane Drama Group actor Jim English. She also directed the radio play Kintsugi for the first trio of Keep Well Campaign radio dramas earlier this year.

The second play, Keep Your Best Side Out, meanwhile, is cryptically described as a play about “what to expect after... if there is to be an after”.

It is written by Poetry Plus group writer Lorna Grant, who is also currently working on a novel and idea for a screenplay. Carrick-on-Suir musician and Brewery Lane actor and director Colm Power is the director and like Suzanne Shine, this is his second time directing a radio play with the Tudor Artisan Hub.  Keep Your Best Side Out’s three actors are Brewery Lane Drama Group veteran Walter Dunphy, who plays Pat; Bellevue Academy drama teacher Ellen Foley, who plays Katie, and US based Aaron Fichera, who plays Daniel.

Walter also acted in one of the earlier Keep Well radio dramas called Magical Moon while Ellen is in her final year of studying for a Theatre & Drama degree at the Cork School of Music.

Aaron Fichera lives in Austin, Texas and his day job is a business management and financial consultant.

He  has previously acted in high school plays and voice recording in corporate training videos.

Aaron was encouraged by family members to audition for this radio series and was delighted to get the email from a family friend in Ireland, that he would be taking part in this second phase of the Keep Well radio play project via Zoom.

The links to listen to the Value of an Education and Keep Your Best Side Out radio plays will be available on the National Culture Night website and the Tudor Artisan Hub Facebook page.

The  radio dramas will be free to watch and no registration is required just click the YouTube link.  Culture Night is funded by the Department of Culture, Heritage and the Gaeltacht and the Creative Ireland Programme in partnership with Tipperary County Council.