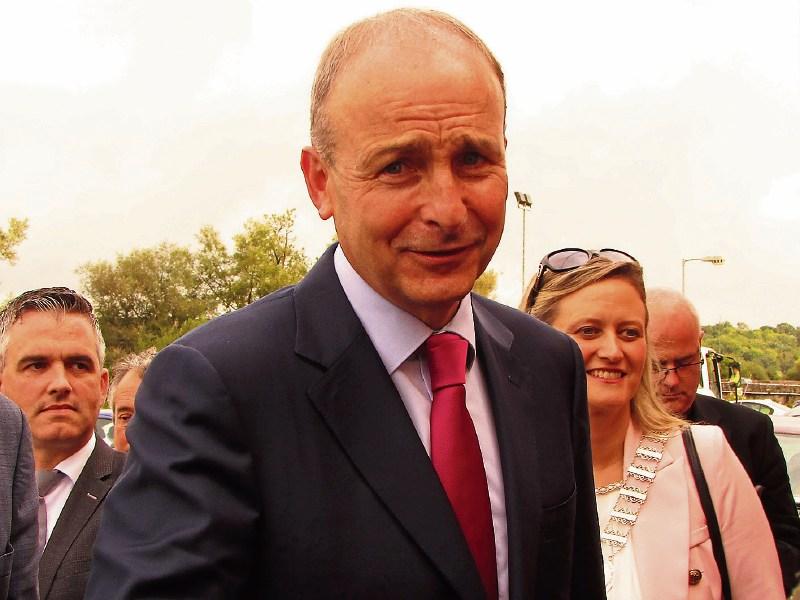 The Taoiseach has indicated the Government will “be responsive” to a funding application for a new pedestrian bridge to solve traffic and safety problems plaguing Ardfinnan since a one-way system was introduced on its historic bridge six years ago.

During a whistle stop visit to Ardfinnan this morning (Friday, September 17), Taoiseach Micheál Martin said he was anxious to solve the village’s problem with the controversial one-way traffic system on its bridge over the River Suir as the current situation was too dangerous and particularly presented a “very serious” safety issue for children.

He advised Tipperary County Council CEO Joe MacGrath to meet with the National Transport Authority and produce a paper on the solution, namely an independent pedestrian walkway over the river; get a design approved and seek the resources needed to implement it.

“If you can do that with the NTA and get that work done fairly quickly, if you can, then Government will be responsive to that plan,” he told a gathering of community, business, political and local authority representatives in Ardfinnan Community Hall.

He pointed out that he has spoken to Minister for Housing, Local Government & Heritage Darragh O'Brien and Transport Minister Eamon Ryan and both were willing to help.

Local FF councillor Micheál Anglim, representatives from Ardfinnan Community Council, Ardfinnan National School and local businesses outlined to the Taoiseach the health and safety hazard the one-way traffic system over Ardfinnan Bridge was for local school children and residents as well as the negative impact it is having on local businesses, tourism and on the village aesthetically.

They appealed for funding to be approved for a new pedestrian bridge over the River Suir to enable a two-way traffic system to resume at the village's existing road bridge.

Cllr Anglim informed the Toaiseach they had been told the pedestrian bridge would cost about €1.8m to build.

Tipperary County Council CEO Joe MacGrath gave a commitment to engage with the NTA and work with the community to overcome any significant issues. He stressed the council was “absolutely up for finding a final resolution” to this problem.

Ardfinnan singer and musician Stefan Grace concluded the community's meeting with the Taoiseach by singing the Ardfinnan Bridge song.

A full report on the Toaiseach's visit and photos will be published in next Wednesday's edition of The Nationalist.