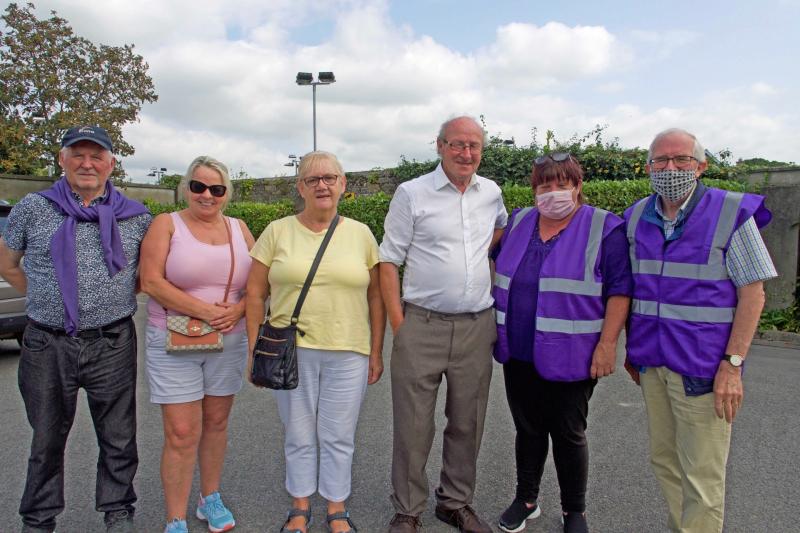 Campaigners will today (Wednesday, September 22) hand over a petition signed by more than 10,000 people demanding the reopening of Carrick-on-Suir’s St Brigid’s Hospital to the Oireachtas Committee on Public Petitions as they protest at the gates of the Dáil.
An estimated 60 people angered at the shock closure of the District Hospital by the HSE last year will take part in the Save St Brigid’s Hospital demonstration outside Leinster House this afternoon.
Several buses will ferry about 40 members of the action group armed with banners and placards from Carrick-on-Suir to Kildare Street for the handover of the petition and protest and they will be joined by more campaigners travelling to the capital independently.
Save St Brigid’s Hospital Action Group member Dean McGrath said they want the Government to re-examine the decision to close the hospital that provided respite, convalescent and palliative care to mostly older people in Carrick-on-Suir and its wide hinterland.
“If these services can’t be provided anymore in the existing hospital building, we want them to be restored to Carrick-on-Suir by building an extension to the hospital or building a new St Brigid’s Hospital on a green field site as HIQA recommended in its last report on the facility,” he told The Nationalist.
The action group is also seeking the release of any documents relating to the decision to close the hospital.
Among the Save St Brigid’s protesters at the Dáil today will be Carrick-on-Suir’s two county councillors Sinn Féin’s David Dunne, a founding member of the Save St Brigid’s Action Group, and Fianna Fáil Cllr Kieran Bourke, who came up with the idea of collecting a petition of 10,000 names.
Joining them will be former Independent TD Seamus Healy, who chairs the Save Our Acute Hospital Services Committee that campaigns for improved health services in South Tipperary.
Mr Healy and fellow Workers & Unemployment Action Group Cllr Pat English helped to man a stand collecting signatures for the Save St Brigid’s Hospital petition at Clonmel’s Main Guard on Monday. Independent TD Mattie McGrath and his daughter Cllr Mairín McGrath also visited the stand to show their support for the campaign.
Mr McGrath, who was with them at the Main Guard, revealed the campaign surpassed its target of collecting 10,000 names for the petition over the past few days with more than 700 people signing it in Carrick-on-Suir alone over the weekend and several hundred more adding their names in Clonmel on Monday.
The campaign group began collecting the petition in June after Minister of State for Older People Mary Butler held a Zoom meeting with Carrick-on-Suir Municipal District councillors seeking answers over HSE’s decision to close the hospital because of concerns the building didn’t meet Covid-19 prevention standards.
Minister Butler told that meeting the decision to close the hospital was final.
Over the summer, action group volunteers canvassed for signatures throughout Carrick-on-Suir and also brought the petition to rural communities in the town’s hinterland traversing three counties that St Brigid’s Hospital served. These communities ranged from Mullinahone, Kilsheelan, Ahenny, Faugheen, Ballyneale and Grangemockler in this county to Fiddown, Owning and Piltown in county Kilkenny and Rathgormack and Clonea-Power in county Waterford.
“The support we have received has been ferocious, absolutely brilliant,” said Mr McGrath.
“People are very angry. They feel disrespected at the way the hospital was closed. They feel it was underhanded to use Covid-19 as an excuse and that there has been a lack of transparency and accountability from senior HSE management and politicians who stood over the closure,” he continued.
A cross party group of TDs from Tipperary, Kilkenny and Waterford supporting the Save St Brigid’s cause will meet the protesters at the gates of the Dáil.
Mr McGrath said they have put in requests for the Taoiseach or Minister for Health to meet them to accept the petition.
Tipperary Sinn Féin TD Martin Browne currently chairs the Oireachtas Committee on Public Petitions, which has the power to seek oral or written evidence about an issue highlighted through a petition from relevant Government departments, other bodies and agencies. It also has the power to invite ministers to attend its meetings and answer questions and may invite petitioner representatives to address the committee.