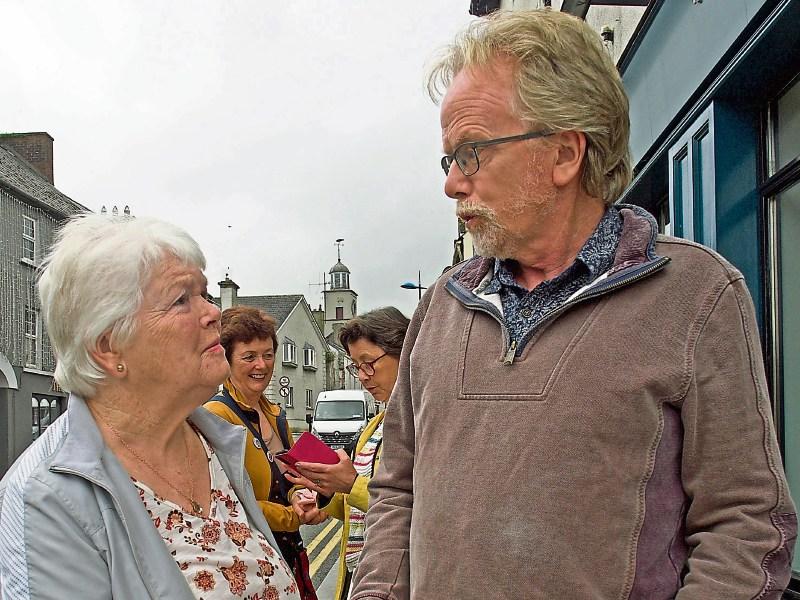 Carrick-on-Suir embraced its status as the county’s Poetry Town with gusto, and a lasting legacy from the festival that concluded last Saturday is a new poem celebrating the town’s  connection to the River Suir, its fishing tradition and its town centre.

The Salmon composed by Billy Fenton, Carrick-on-Suir’s poet laureate for the festival, captures all these features of his hometown in 30 evocative lines peppered with fishermen’s names, the names of well-known local businesses and landmarks.

His first public reading of The Salmon at the Tudor Artisan Hub marked the launch of Poetry Town’s nine-days of literary and cultural events and was broadcast online on the Hub’s Youtube channel on Friday, September 10.

Mr Fenton, who grew up in St John’s Terrace in Carrick-on-Suir, told the launch, he was very honoured to be asked by Poetry Ireland to compose a poem about his hometown but also a little anxious.

“How to represent a town in 30 lines of poetry. What do you focus on and what do you leave out?”

He recounted how he reread the town’s history, rewalked its streets, re-explored the river and talked to people who knew much more about the town than he did.

As he walked the towpath along the Suir, he was inspired by his memory of a boat trip from Kilsheelan to Carrick-on-Suir he did with a local fisherman “Mixer” Power nearly a decade ago.

“About a mile up stream he pulled in and proudly showed us a memorial that was beginning to evolve on the river bank -  a spontaneous expression to the memory of fishermen who had died.”

This was where he began the poem’s journey moving onto the bronze salmon at the top of the Town Clock, down through the town’s streets and finishing back at the river.

For Mr Fenton,  the salmon symbolised the importance of the river to the town. He thought of how salmon numbers were now depleted, like many fish species globally,  and  snapnet fishing, unique to the South East,  is in danger of dying out.

“But Carrick people are resilient and all its women and men will live well with new opportunities. This poem is dedicated to all of them, past, present and future,” he concluded.

Fellow Carrick-on-Suir poet Michael Coady also recited one of his poems- Benediction on 16th Day of May - for Poetry Town’s online launch. It too pays homage to Carrick-on-Suir.

Mr Fenton, who lives at Granagh near Waterford City, was delighted to read his new poem alongside the renowned writer and poet who was the subject of a special exhibition at Carrick Library during the Poetry Town festival.

“I have admired Michael for such a long time. His poetry is wonderful and most people can identify with what is in his poems,”he said.

Mr Fenton, whose career background is in technology, , started composing poetry about five years ago and has certainly made his mark during that time.

His poetry has been published in the Irish Times, the Poetry Ireland Review, Crannóg, The Honest Ulsterman and other publications.

He was shortlisted for the Hennessy Award in 2018, the Fish Poetry Prize in 2021 and was chosen as a mentee for the Words Ireland National Mentoring Programme in 2019.

He said Carrick-on-Suir is a great town for the arts and writing and he feels hosting Poetry Town has definitely helped put it  “on the map” as a  centre of literature. He paid tribute to Poetry Town coordinators Margaret O’Brien of Writing Changes Lives and  Linda Fahy of the Tudor Artisan Hub and also  Pete Smith of   the Tudor  Artisan  Hub for their tireless support of local writers and artists.

The Salmon  by Billy Fenton

Above the Old Bridge, beyond

the Salmon Weir, near the place

where sea meets river  - a wall

Robinson, Callaghan, and other

river people. I can still see

their faces as I look up through

the shimmer of flow, their bodies

bent over cots, hands drawing in

the net after it snaps shut.

High above them the Town Clock,

crowned with a salmon of bronze –

its eyes drift over the spine of

Main Street, past The Bombay,

The Carraig, down through

into flood and ebb

Written under commission by Poetry Ireland for Poetry Town 2021.