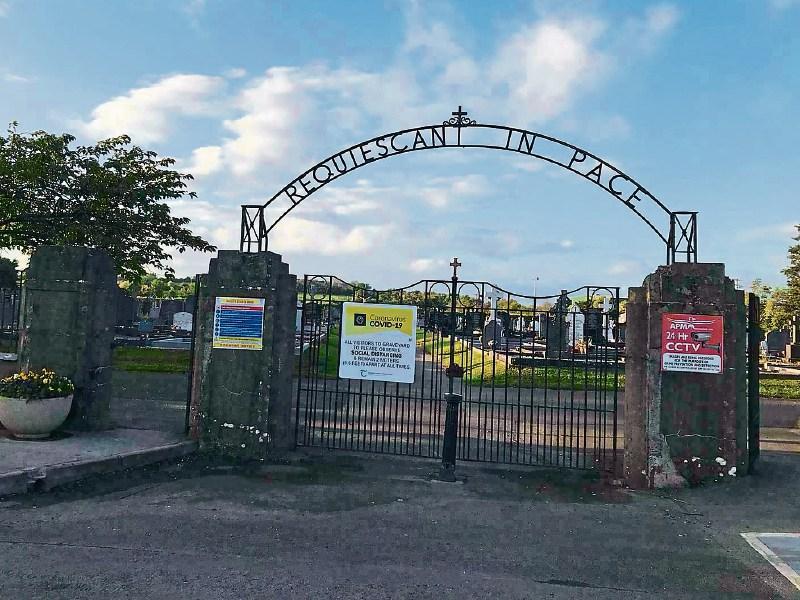 The entrance to Cormac's Cemetery in Cashel

Grieving families in Tipperary’s main towns face paying council burial fees upfront before their loved ones’ funerals if a stand off between Tipperary County Council and undertakers over controversial legal agreements isn’t resolved.

Funeral directors in Tipperary Town and Cashel are outraged at a county council ultimatum they received last week directing that interment fees must be paid before funerals if the undertakers don't enter into a formal legal agreement with the local authority in relation to their payment.

The demand issued by the council last Friday has been condemned by local undertakers and politicians as “insensitive” and “lacking in compassion” to grieving families and “unfair” and “inflexible” to funeral directors forcing them to take on the full responsibility for collecting council fees.

The council argues it needs to require undertakers to enter into a legal agreement for the full payment of council fees for grave openings, closings and purchases because of bad debts the council has incurred.

Tipperary/Cahir/Cashel Municipal District administrator Anthony Coleman said the council has accumulated €130,000 in bad debts across the county over the past four to five years due to unpaid council fees associated with burials.

It currently costs €365 to open a grave a St Michael's Cemetery in Tipperary and €450 to do the same in Cashel’s Cormac’s Cemetery. The fee for purchasing a grave in each cemetery is €700.

Mr Coleman confirmed the council will roll out the new legal agreements policy countywide over the next week or two.

He said if undertakers enter into this legal agreement with the council there won’t be a requirement for families to pay the grave opening, closing and purchase fees in advance of funerals.

The controversial new legal agreement policy affects undertakers and bereaved families whose loved ones are to be buried in cemeteries in the county’s main towns previously governed by a town council or borough council.

Mr Coleman said the practice in these towns has been for undertakers to contact the council to request a grave opening and closing on behalf of their clients and for council staff to do this work.

James Devitt of Devitt’s Funeral Directors in Cashel said he and the eight other undertakers in Tipperary/Cahir/Cashel Municipal District are opposed to entering into a legal agreement with the council over the payment of council interment fees.

And he and his fellow undertakers are outraged at the council’s demand that these fees must be paid upfront before funerals if they don’t enter into this legal agreement.

Mr Devitt declared he won’t be putting families under pressure to pay grave fees before a funeral.

“This is an absolute outrage and I as a funeral director will not be doing it and will not stand for it.

“I think it’s wholly insensitive. Families bereaved and at their worst to be hassled like that is disgraceful.

“The council have a bigger issue in Cormac’s Cemetery in Cashel with anti-social behaviour,” he continued. “They would be better off dealing with that and let people pay when they can.”

Mr Devitt insisted undertakers never had a problem with grave fees before.

He acknowledged it does take time for these fees to be paid to the council because undertakers can’t pay them until they are paid themselves by families of deceased people.

“In most cases, the funeral is paid from the deceased’s estate if they have money in a bank or credit union account. It takes time to do this. It’s not that people can’t and won’t pay the fees. They have to be given the chance to pay.”

The email, Mr Devitt and other undertakers serving Cashel and Tipperary Town received last Friday informed them that with “immediate effect” council interment fees must be paid in advance of a funeral as there are currently “no formal agreements in place with undertakers operating in Tipperary in relation to payments for burials”.

The email outlined that if the undertaker was not agreeable to paying the council’s costs, fees and charges associated with a burial, they must inform the family in order for them to pay before burial arrangements are finalised.

And the email told undertakers that: “until written confirmation is received by the council from either the undertaker or family member that all costs have been paid, then burial arrangemnts cannot be finalised”.

The email added that the council was “open to entering a formal legal agreement with undertakers in relation to the full payment of council fees and charges associated with interments, if they wish to provide this service on behalf of their clients”.

Mr Coleman said it was unfortunate the council has to go down this route due to the issue of bad debts.

“We don’t want to cause additional stress to families and people at times of bereavement.

“But at the same time the council can’t be left with debt and unpaid fees when we are expected to provide this service.”

Mr Coleman explained the council’s new policy was being introduced in the context of its capital programme of €1.7m investment in cemeteries across the county. The council needed to ensure it recouped its costs to enable it to continue to maintain, purchase and expand burial grounds.

He pointed out that council staff spent a lot of time and resources trying to follow up with people who owed burial and grave purchase fees and in some cases it was not possible to track down the families of deceased people.

In relation to Mr Devitt’s argument that the council was putting all responsibility on undertakers to collect council fees, he countered it was undertakers who contacted the council to provide the service so they must discharge the fees owed.

Local politicians, have joined with Mr Devitt in condemning the council’s new policy and several have contacted the council directly this week to appeal for it to be scrapped.

Cashel based Sinn Féin TD Martin Browne and Tipperary Town Sinn Fein Cllr Tony Black appealed to the council to “revisit” and “ reconsider” the policy, arguing that it places an “undue responsibility” on undertakers to ensure payment of council fees.

Deputy Browne said while he understood Tipperary County Council is suffering some loss in relation to unpaid fees, he believes it is wrong to effectively transfer responsibility to the undertakers to ensure debts owed to the council are paid.

“This level of inflexibility on the part of the local authority is also likely to put financial pressures to the forefront for recently bereaved families, who are going through the first and particularly difficult stages of the grieving process.

“For example, purchasing a double grave and getting it dug can cost the considerable sum of €1,800.

“Wills and insurance policies are often relied upon to pay for these costs, but these financial arrangements often take a number of weeks, if not months to conclude,” he pointed out.

Cllr Black said holding undertakers responsible for the payment of these costs will add to the pressures on bereaved families and have an impact on the unique personal relationships undertakers must foster with their clients.

Cashel Fine Gael Cllr Declan Burgess said he was “deeply concerned” about the council's decision regarding the burial process in Cashel’s Cormac’s Cemetery.

“It’s unfair and certainly lacks any sort of compassion. Passing the buck to our local undertakers is inappropriate,” he said