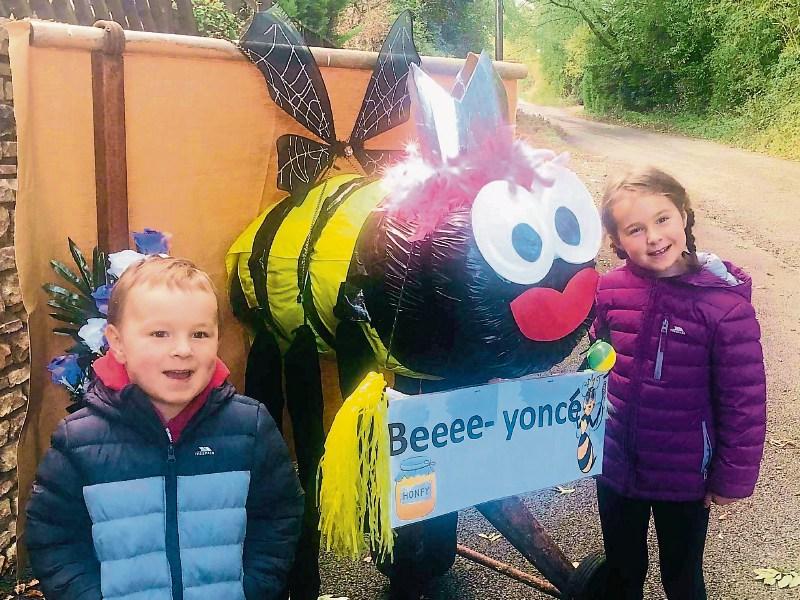 Conor and Aoife Ryan standing beside the Beeee-yoncé scarecrow, one of the entries in the Knockavilla Community Council Scarecrow Contest

The Ryan children from Deerpark, Dundrum with the Scary Gaga scarecrow that won the overall prize in Knockavilla Community Council’s Halloween Scarecrow Contest

The real Lady Gaga would be impressed if she came upon the Scary Gaga scarecrow she has inspired that has won Knockavilla Community Council’s Halloween scarecrow contest.

The tall, spooky figure made of branches and foliage and  sporting a creepy mask and cloak was made by Garrett and Arienne Ryan and their children Ted, Isabella and Margarita from  Deerpark, Dundrum, who have won a €100 One-For-All voucher.

There were also 10 runners up prize winners in the competition run by Knockavilla Community Council that attracted close to 50 entries from Knockavilla, Donaskeigh and Dundrum.

The residents of the three neighbouring communities showed great creativity in producing an eclectic collection of Halloween scarecrows both humorous  and spine chilling that popped up outside homes, schools, businesses along the roadsides, crossroads and on poles and signs in the week running up to Halloween night.

The Halloween festivities culminated in a trick-or-treat event for local children in Knockavilla Community Hall on Sunday evening.

Kieran Slattery of Knockavilla Community Council said the organisers were delighted with the fantastic response to the scarecrow competition, which along with the trick-or-treat event raised funds for Temple Street Children’s Hospital.

He thanked the scarecrow competition's sponsors Jack Leonard and Lisa O’Keeffe for their support of the event.

The community council is now turning its attention to Christmas and along with Tipperary Vintage Rally Club is planning for a visit from Santa on Friday, December 10. The event will be in aid of  South Tipperary Hospice.