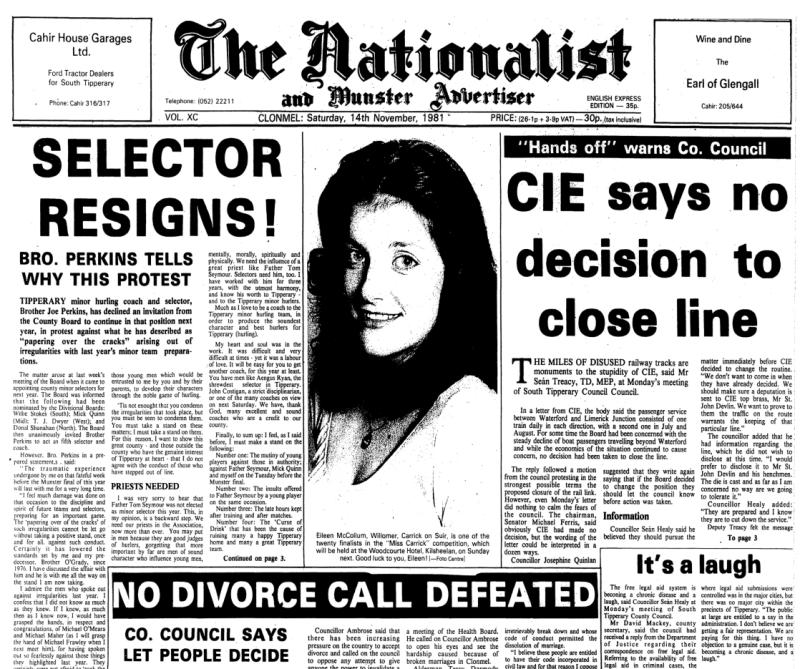 40 years ago this week, on November 14, 1981, our front page lead was headlined “Selector Resigns”. It related to the resignation of Tipperary minor hurling coach and selector, Brother Joe Perkins, who had declined an invitation from the County Board to continue in that position in protest against what he described as “papering over the cracks” arising out of the irregularities with the previous year’s minor team preparation.
In a prepared statement read out, Brother Perkins said: “I was shocked last year at some of the things that happened, including the behaviour of a very small minority, after the All-Ireland. This year these irregularities have raised their ugly heads again, and I am not satisfied that you have taken the precautions to ensure that they will not occur again,” the statement said.

CLOSURE OF RAILWAY LINE
Another front page story that week from the monthly South Tipperary County Council meeting informed readers that CIE had taken no decision on the closure of the passenger service between Waterford and Limerick Junction, which at the time consisted of one train daily in each direction, with a second one in July and August.

DIVORCE MOTION AT COUNTY COUNCIL
Also at the same council meeting a motion, proposed by Cllr Tom Ambrose, “that this council opposes any attempt to introduce civil divorce in this State,” was defeated by ten votes to six.
According to Cllr Ambrose “we have enough problems already besides importing the failures of anti-Christ systems from places such as England and France. Arguing the other way, Cllr Jimmy Murphy said that there were cases “even in the Holy Land” of Clonmel of deserted wives and husbands with children suffering because of a broken relationship. “It is far more decent,” he said, “to grant divorce than to have this sort of thing going on”.