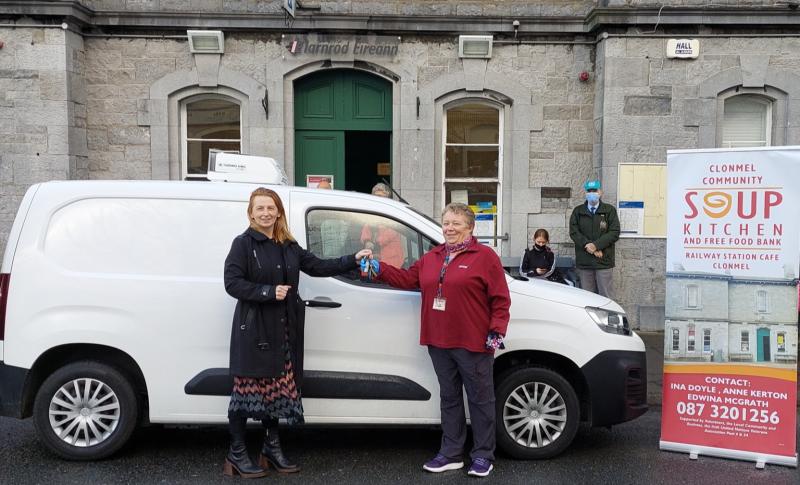 Jennie Hannigan, a board member of The Association of MCKS Charity Ireland hands over the keys of the refrigerated Citroen Berlingo van to Ina Doyle who accepted it on behalf of the Soup Kitchen.

A Clonmel based volunteer group who have been running a Soup Kitchen for the past seven years, serving a wide area of south Tipperary, recently received a great boost with the donation of a modern refrigerated van, a 2019 Citroen Berlingo.
In August last, Ina Doyle, who heads up the Clonmel Community Soup Kitchen and Free Food Bank based at Clonmel Railway Station, issued an appeal for a newer vehicle to enable them to continue with their charitable work in an efficient manner. Thankfully, through the help of The Nationalist and their own Facebook page, that call for assistance was answered, with Pranic Healing Charity Ireland (MCKS) coming to their aid.
The Soup Kitchen, who each week donate food parcels to over 100 families covering Clonmel, Cahir, Cashel and Carrick-on-Suir and all areas in between, are “over the moon” with the new mode of transport, according to Ina.
“It’s great news for us and we are delighted with it. Firstly getting a 191 Citroen Berlingo van was great but when it was upgraded with refrigeration that was an extra bonus. It will open a lot of doors to us as regards going to the different supermarkets, butchers, etc., even our weekly run to the Cork Food Hub, to source fresh and frozen food. Having a refrigerated van now will make life a little easier for us to do our work,” she said.
“We are eternally grateful to The Association of MCKS Charity Ireland (also known as Pranic Healing Charity Ireland) for this huge donation, and especially to board member Jennie Hannigan who helped to put it all together for us. It’s a dream come true and we are absolutely so happy about it. And thanks also to Barlo Motors for supplying the van and helping to keep the cost of it down,” she said.
All told by the time the van was sourced and was fitted the cost wasn’t too far short of €20,000.
“When we put out the appeal in August because the previous van was coming to the end of its days, we were hoping we’d pick up something half-decent, but we didn’t think we would end up with a 2019 Berlingo with refrigeration. It’s a huge thing for us in the soup kitchen to have this now,” added Ina.
The new van is a deserving boost to the many volunteers involved in the soup kitchen who put in two stints every week, on Tuesday evenings and Friday mornings, serving the needy of Clonmel and south Tipperary. 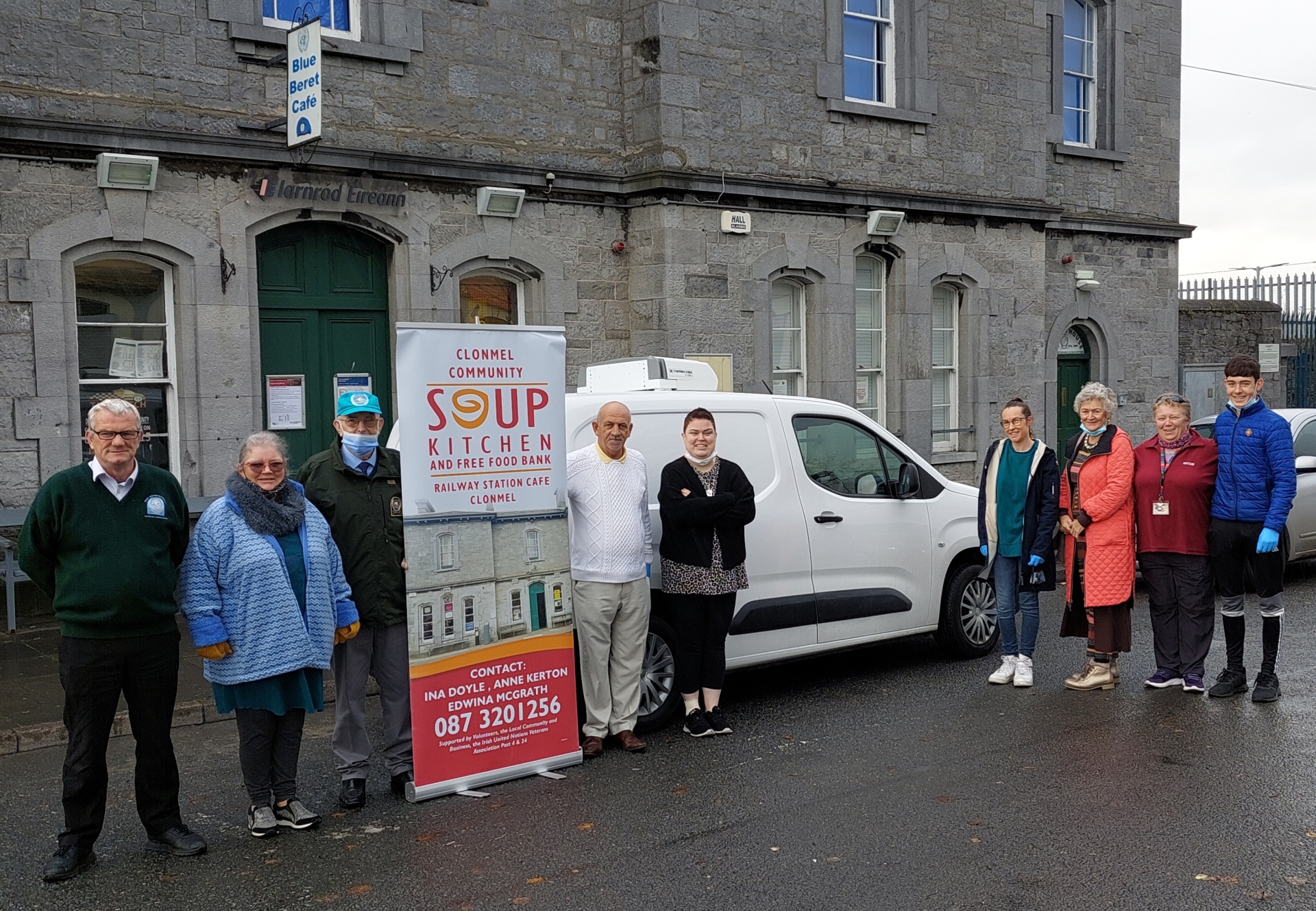 And unfortunately, according to Ina, the situation, if anything, is worsening this year, with the numbers looking for help with food parcels edging up slowly.
“Yes, the numbers are going in the wrong direction, and the demand is increasing. This week, I certainly got more calls for help from people and we gave out an extra 15 parcels this morning (Friday) than last week. And with Christmas now on the way, people are in dire straits. There are lots of families out there, families with young children, who are seeking our help all the time. We try to help them each week and we will be trying to provide them with a little extra in the line of a food hamper of some sort for Christmas,” added Ina.
With that in mind, Ina, a founder member of the group, was anxious to point out two upcoming food appeals. There will be one at Kilcoran Lodge on Sunday, December 5 so hopefully people out that general area will get behind it. And also there will be one in Clonmel at Freemans Motors (Davis Road) on Sunday, December 18, followed by a charity motorbike ride through the town up to the Railway Station. "So hopefully, we’ll get a good response to these events this year," added Ina.
While the demand for food assistance is increasing which puts pressure on the volunteer group to keep pace with the demand, Ina was hugely appreciative of the response of the public on an ongoing basis.
“They’re very very generous and people in general are very good at giving us parcels on an ongoing basis, just dropping bags continuously every week here at the Railway Station. I’m here every Thursday morning from 11 to 12, should anyone have food to donate, especially with Christmas around the corner,” said Ina.
“And again, as ever, the work we do wouldn’t get done without the help of all our volunteers. We’ve picked up a few new ones of late and of course we have two secondary school students giving us a hand here every Friday morning also, from Clonmel High School and Rockwell College, and they’re great too” concluded Ina.