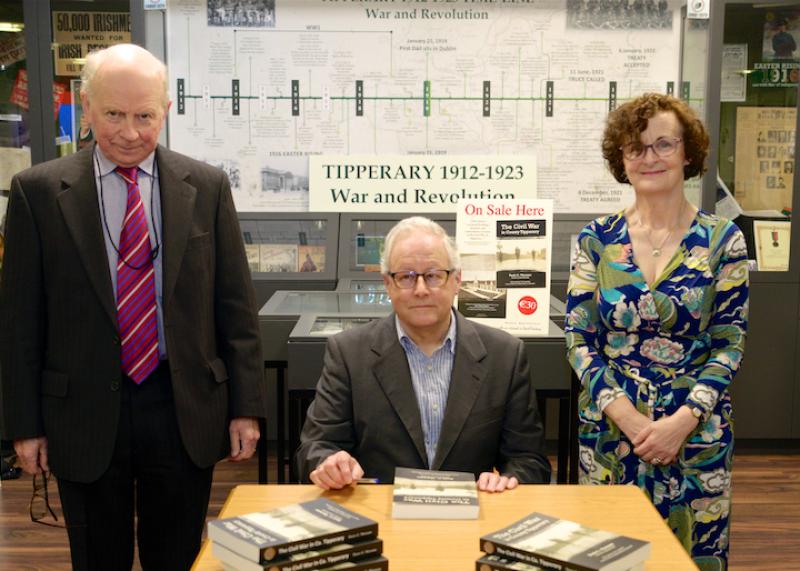 At the launch of The Civil War in County Tipperary were from left: Prof Vincent Comerford, Dr Denis Marnane (author) and Mary Guinan Darmody

A major new publication, The Civil War in Tipperary by Dr Denis G Marnane, was launched at the Tipperary Excel on Saturday, November 20 by Dr Vincent Comerford retired Professor of Modern History in Maynooth.

The launch was preceded by the screening of two short films, the re-enactment of the wedding of Dan Breen in 1921 during the War of Independence, and a new film entitled: Welcome to Tipperary.

This very well received production is scripted and narrated by Dr Marnane with production by Mary Alice O’Connor.

Dr Vincent Comerford retired professor of modern Irish history in Maynooth, spoke in glowing terms as to the vast contribution Dr Marnane made in producing this book and in previous publications such as The Third Brigade covering the War of Independence.

Dr Comerford said that this latest publication is very important as very little has been written about this sad period in our history and that Dr Marnane is meticulous in his research.

Ms Mary Guinan Darmody, Tipperary Local Studies, was also commended for her help and assistance in the project. Dr Marnane in his own remarks said this book about the civil war was not an easy book to write, but he didn’t want anyone else to write it either.

Dr Marnane invited Brian Shea to address the audience, his grandfather Thomas Conway immigrated to America after the civil War and Brian and his wife and sister came especially to attend the launch.

The story of Thomas Conway and his connection to the town (he lived at 36 Main Street - O’Connor Bros shop) is chronicled in the book and makes for very interesting reading.

In attendance at the launch was Dr Martin Mansergh, who described the book as a “tremendous addition to the repository of Irish history” and Mr John Hogan, historian and author, who lauded the painstaking research in the book and complemented both films as being innovative ways to bring historical incidents or thematic local knowledge to an audience.