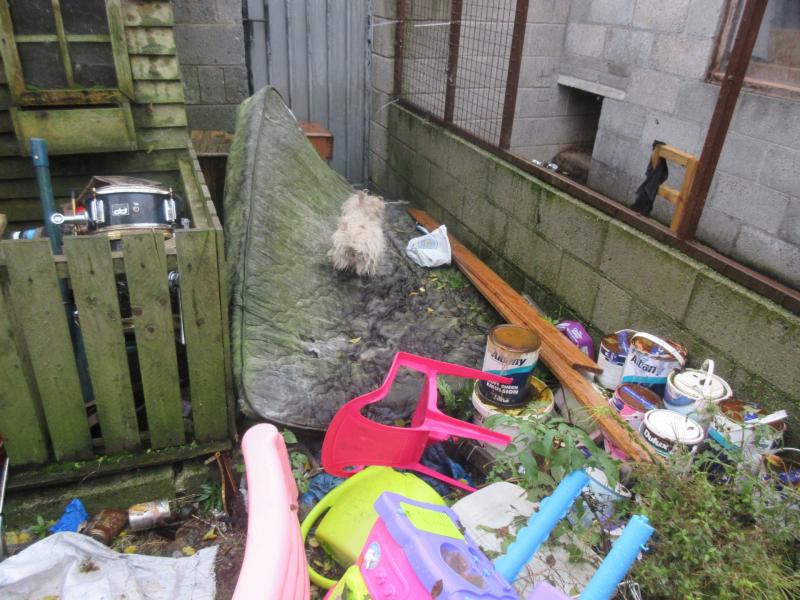 Pictured above is Penny, who had to be removed from her property on 14th November 2019

At Nenagh District Court in Tipperary on 9th December 2021, a woman with an address at 7 Woodview Close, St Colon’s Road, Nenagh, Co Tipperary was convicted of four counts of cruelty under the Animal Health and Welfare Act (AHWA), 2013.

The case was in relation to a female dog, Penny, who was removed from her property on 14th November 2019.

ISPCA Animal Welfare Inspector Emma Carroll first attended the property on the 13th November 2019, in response to a report of the potential abandonment of a dog. She discovered a small white dog who was very matted and dishevelled in the back garden which was filled with rubbish, faeces as well as urine-soaked bedding.

Inspector Carroll left a notice to make urgent contact. She sealed the property and upon her return 24 hours later, the property remained sealed. The dog was seized and immediately brought to a veterinary examination.

The young dog was found to be severely matted and had saliva staining. Antibiotics were administered due to coughing and the dog received a badly needed groom.

The veterinary practitioner who examined the dog gave evidence in court of the clinical examination of the dog and her findings. It was the professional opinion of the vet that the dog was neglected upon questioning.

The defendant contacted Inspector Carroll on the 18th November 2019 to meet her at another address. The woman claimed she had been ill, that her neighbours were to feed the dog but conceded that no official arrangement was made.

The woman said that no one had visited the dog on Wednesday the 13th but that her partner was there the morning of the 13th. When questioned further it was actually the morning of Friday the 15th when her partner checked on the dog. When asked why they did not respond to the notice until Monday the 18th, she said it was Saturday the 16th before they noticed the dog had been seized. She also alleged that her estranged husband was responsible for the cleanliness of the garden. The defendant surrendered Penny to the care of the ISPCA.

Inspector Carroll said: “I was extremely shocked and saddened to see the living conditions Penny was subjected to.  Abandoned, frightened and forgotten about. Thankfully a kind hearted animal lover alerted us to her plight allowing us to save her from further neglect and suffering.  Penny has since been responsibly rehomed to a loving family where she is now living her best lapdog life and is loved and treasured”.

There will be many more neglected animals who will need to be rescued and our frontline work is in need more than ever. If you would like to help the ISPCA continue this vital work, rescuing Ireland’s most vulnerable animals, please if you can, make a kind donation here to help the animals that are suffering now.

The ISPCA encourages members of the public to continue reporting any animal welfare concerns online here or by contacting the National Animal Cruelty Helpline on 0818 515 515 or by emailing helpline@ispca.ie.