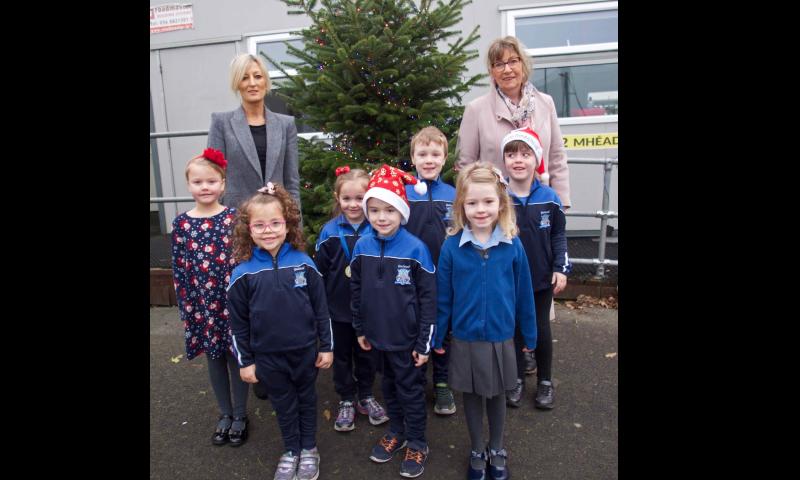 Christmas has come early for the staff and students of Gaelscoil Charraig na Siúire as Tipperary County Council has granted planning permission for their long-awaited new state-of-the-art school on the site of Carrick’s former St Joseph’s Technical College.
“An bronntanas Nollag is fearr (the best Christmas present ever),” declared Gaelscoil Charraig na Siúire principal Linda Nic an Bháird as she welcomed the council’s decision last week to grant conditional planning approval for their new school.
The 113-pupil Gaelscoil has been located in temporary, rented accommodation since its foundation 23 years ago. Carrick-on-Suir United AFC’s grounds at Coolnamuck Road, Carrick is its home for the past 20 years.
Securing planning permission is a major step forward in the school’s quest for a permanent bricks-and-mortar school building and grounds.
The Department of Education now hopes to begin the tendering process to appoint a contractor to build the two-storey school in the New Year.
Ms Nic an Bháird said the tendering process will take several months and they hope to commence construction work next summer.
“We hope to be in the new school sometime during the 2023/2024 academic year.”
The council has granted planning permission for the former St Joseph’s College building on Carrick’s Clonmel Road to be demolished and replaced with the Gaelscoil, designed by Atkins Architects.
The new school will comprise eight teaching classrooms, a library, general purpose hall, support teaching rooms, outdoor play areas and nature areas.
Gaelscoil Charraig na Siúire Board of Management chairperson Bríd de Paor, one of the school’s founders, said she was overjoyed the Gaelscoil will have a modern, purpose-built facility after 23 years in temporary and rented accommodation.
“This is fantastic news for the town as well as the Gaelscoil.
“Tá ard áthas orainn ar fad,” added Bríd, whose daughter Eileen was one of the school’s first pupils.
Bríd’s welcome is matched by Gaelscoil Charraig na Siúire Parents Association chairperson Teresa Corcoran, who said she was delighted the Department of Education & Skills site would again be used for the education needs of the pupils of Carrick-on-Suir. It was a great location for the Gaelscoil, she added.
Ms Nic an Bháird said she was looking forward to the school family of 113 pupils and 14 staff moving to the attractive new facility at the earliest possible date.
She hopes the remaining stages of planning, tender and construction will proceed expeditiously.
“This is a great day for education in general and the Gaelscoil pupils and staff in particular” she added
Gaelscoil Charraig na Siúire was founded in 1998 following a meeting of a group of parents in the town interested in setting up a school to educate their children through the Irish language.
In its first few years, the school was based in the Greystone Street building that is now home to Carrick Carpets. The Gaelscoil rented it from Carrick-on-Suir Musical Society, which used the building for rehearsing.
The school’s pupil numbers gradually increased and it moved to its current location at Carrick United AFC’s grounds around 2001/2002.
The school currently comprises seven classrooms, three special education rooms and a general purpose hall that are located in a number of pre-fab buildings.
Ms Nic Bháird and Ms de Paor paid tribute to Carrick-on-Suir United AFC for the support and help the club has given the Gaelscoil over the past two decades.
“We have had a wonderful relationship with Carrick United as our landlord,” said Ms Nic an Bháird.
The school’s students use the soccer club’s playing grounds for sports and they also have access to St Molleran’s GAA Club’s playing grounds next door.
Ms Nic Bháird thanked the GAA club, which she pointed out even put in a gate connecting the school to its grounds.
The first major step forward in the Gaelscoil’s long running campaign for a purpose built school building and grounds came eight years ago when the project was included in the Department of Education’s capital programme for schools.
About four years ago, the Department proposed the St Joseph’s College property as a site for the school.
Comeragh College Community School’s students attended classes in the old technical college building before that school moved to its new premises on the Pill Road in 2016. The building has been vacant ever since.