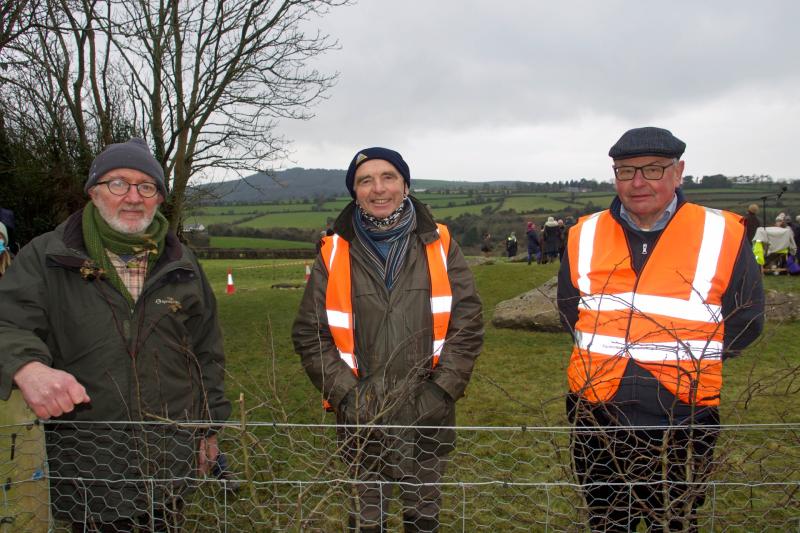 Tipperary County Council is to erect direction signs to Knockroe Passage Tomb and other Lingaun Valley heritage sites along with information boards about these attractions early next year.
That’s according to the Lingaun Valley Tourism Group, which along with Caiseal Conservation Committee, hosted the annual winter solstice event at Knockroe attended by Minister of State for Heritage & Electoral Reform Malcolm Noonan on Tuesday, December 21.
The Minister of State was at Knockroe near Ahenny village for the morning solstice that occurs at 8.45am.
He was joined by about 200 people while a further 150 visited the ancient site located just 100m from the Tipperary county border for the evening solstice at 3.45pm. A number of modern day Druids were among the visitors.
Minister Noonan wasn’t the only special guest at Knockroe on December 21. Archaeologist Emeritus Professor Muiris O’Sullivan, who led the archaeological excavation of the site in the 1990s, gave a talk to visitors about the monument and its significance. Lingaun Valley Tourism Group treasurer Richard Walsh said the sun didn’t shine in the morning or evening on December 21 but it was nevertheless a lovely winter’s day for the crowds who visited the site.
He estimated that about half the visitors to Knockroe for the winter solstice weren’t local to the area.
He met people who had travelled all the way from county Cork for the occasion.
Mr Walsh said the direction signs and information boards about Knockroe and other Lingaun Valley sites will be erected sometime in the New Year.
The information boards will be located in a number of key locations in the valley including Ahenny, Faugheen, next to the Champion Kiely monument in Ballyneale, beside the Michael Hogan statue in Grangemockler and at walking trails leading to Carrigmaclear Hill and Slievenamon.
A number of “Welcome to the Lingaun Valley” signs will also be erected on main roads.
Funding
Walsh said the signage and information boards are being funded by Tipperary LEADER Group, the Local Authority Waters Programme and Lingaun Valley Tourism Group.
In his address to the winter solstice visitors at Knockroe, the Kilkenny based Minister of State described the passage tomb as the best and most decorated example of this form of Neolithic megalith in the south east of Ireland.
He highlighted how Kilkenny County Council has carried out extensive work to improve the access lane to the passage tomb along with the new fencing and the addition of car park spaces to facilitate visitors to the site.
He thanked Professor O’Sullivan for his work at Knockroe and paid tribute to the Lingaun Valley Tourism Group for its efforts to raise public awareness of the passage tomb and other heritage sites in the valley that straddles communities in south west Kilkenny and south Tipperary between the towns of Carrick-on-Suir and Callan.
“In 2019, the Lingaun Valley Tourism Group including Richard Walsh, Tony Musiol, Frank Walsh and Daniel O’Mahony worked to erect signage for the heritage sites on the Kilkenny side of the Lingaun Valley.
“They have also recently received similar signs for the sites on the Tipperary side of the valley, which will be erected by Tipperary County Council in early 2022.
“I would like to commend the Lingaun Valley Group on their continuous efforts across the valley, which are very evident for all to see.”
Minister Noonan also spoke about the Revised General Scheme of Monuments and Archaeological Heritage Bill approved by the Cabinet on November 30 and which he has now referred to the Joint Oireachtas Committee for pre-legislative scrutiny.
“This proposed bill will comprehensively modernise and revise the existing legislation, provide that the conservation and protection of monuments, such as the tomb here at Knockroe continues to be effective and innovative, and ensure our archaeological heritage continues to be treasured by present and future generations,” he added.