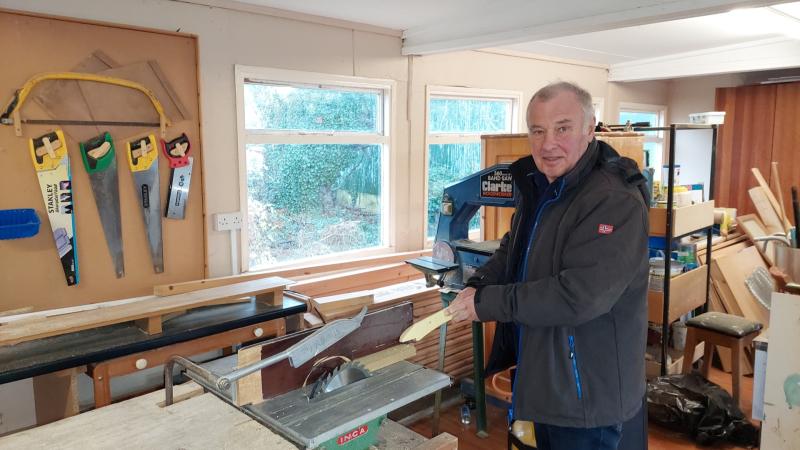 Clonmel Men’s Shed Association secretary Keith Hamilton, is hoping that 2022 will provide the opportunity for sheds throughout the country to get back to opening up once again

The minuscule daily cock’s step of extra daylight we are now beginning to observe as 2022 commences gives us all hope that there is light at the end of this long and dark global tunnel.
A pandemic-ravaged planet for the past 21 months or so since Covid first arrived has turned all our worlds upside down. The incessant daily drip-feed of distress regarding case numbers, hospitalisations, economies, lockdowns, testings, restrictions, etc., has been utterly exhausting. The resultant knock-on effects have been devastating for those directly impacted through death and serious illness, but almost everyone has, in one way or another to varying degrees, been adversely affected.
The whole social fabric of society hasn’t been spared, how could it be with such virulent viruses at large. Many organisations, clubs and associations have had their activities greatly curtailed, and indeed some in this country have been shuttered completely since March 2020 when the coronavirus first raised its very ugly head.
One such organisation is the Irish Men’s Shed Association, whose Clonmel branch is made up almost entirely of “retired” members. The group hasn’t met up officially now for 20 months and there is little immediate prospect of a resumption anytime soon. 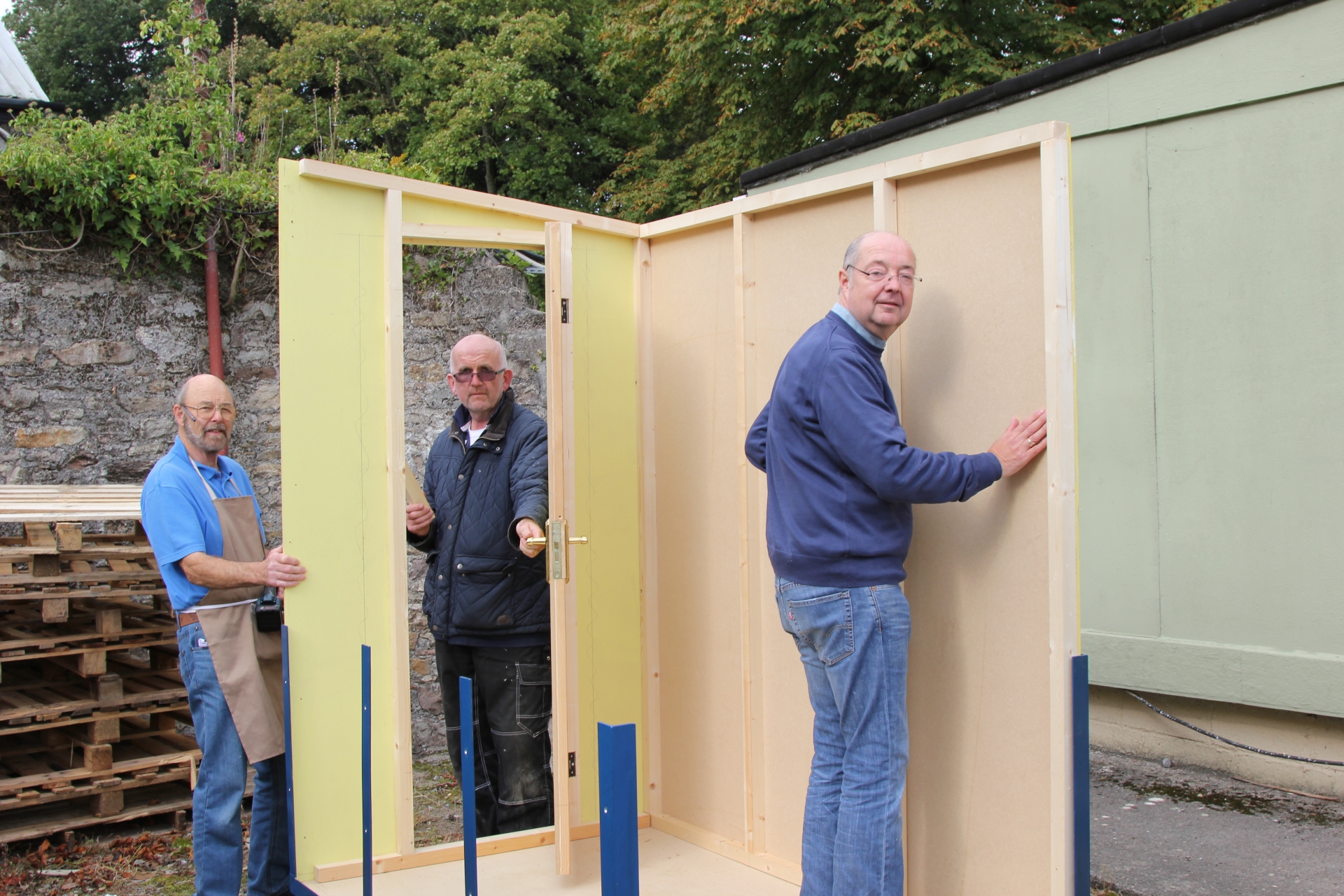 Clonmel Men's Shed members busy at work constructing a booth for Clonmel Rotary Club which is used annually for the Remembrance Tree Collection as well as other projects.

“Many of our members, by and large, fit into the extremely vulnerable group,” according to Clonmel Men’s Shed secretary, Keith Hamilton, “and of course, like everybody else, we have been very badly affected by Covid”,
The first men’s shed in Ireland was established 10 years ago - primarily as an outlet for older men to meet up and, no doubt, as a medium to combat social isolation for that cohort of society. There are now over 460 sheds affiliated with the Irish Men’s Sheds Association (IMSA). Indeed this country has more sheds per capita than any other nation in the world. “Sheds”, as such, were first established in Australia in the late 1970s.
The Clonmel Men’s Shed has now been in operation for approximately nine years. However, since their headquarters at Dudley’s Mills closed due to Covid in March 2020, life has been difficult for the 12-member group, explained Keith.
“This has been really dreadful for my life and for others also,” he said. “When we are in operation, we open three times a week, so it was somewhere to go for 8, 9, 10 hours in the week for members. It’s a wonderful idea for retired people who actually need an outlet for many reasons. We all know about the positives of what it does for mental health issues,” added Keith, who originally hails from Cardiff, Wales. 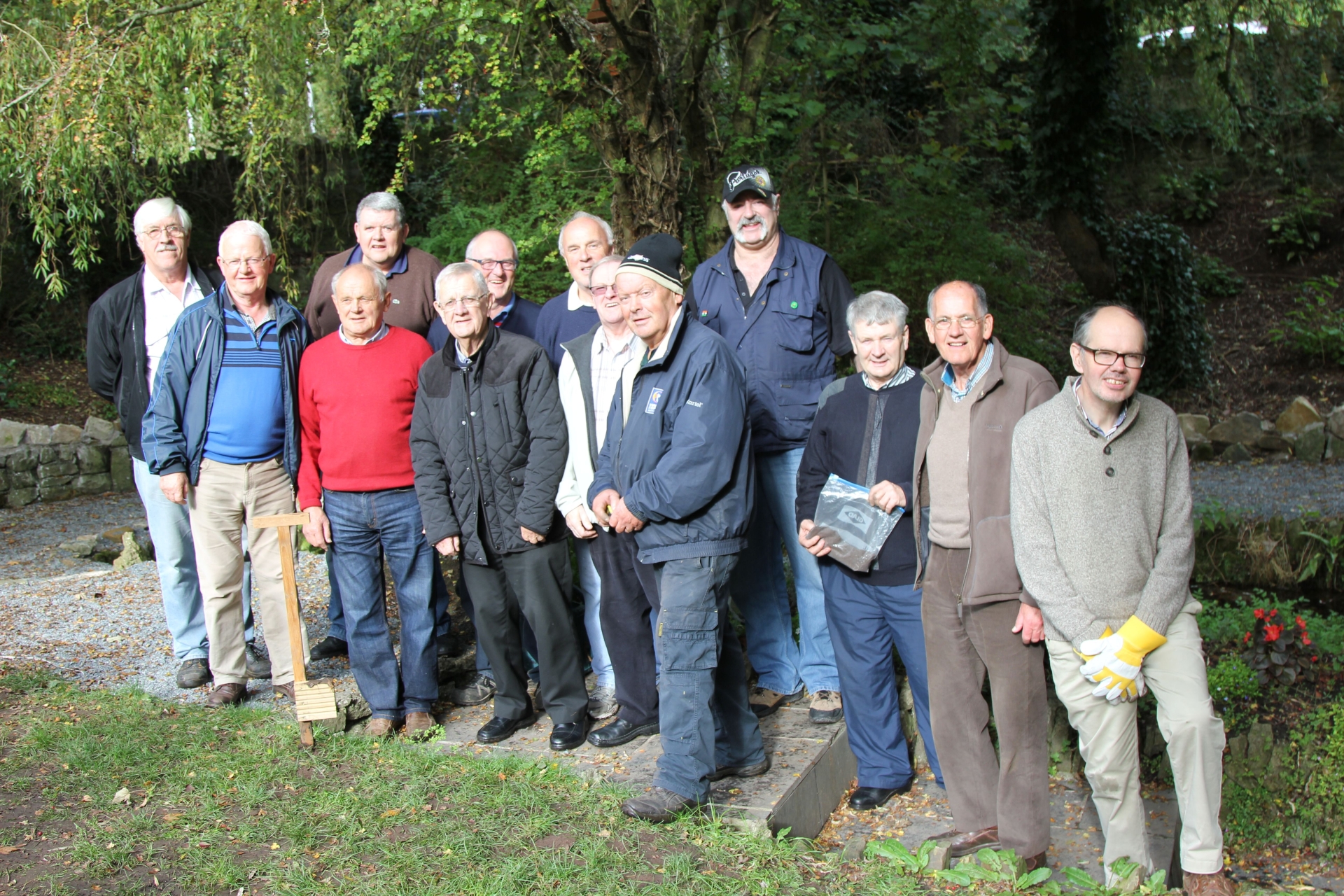 Clonmel Men's Shed members at the Park at Toberaheena Clonmel where they helped out with building a bench, bird feeders and planting.

The local group, all over 60 years of age now, come from different backgrounds in life and their shared past careers and experiences all add interest to the mix of the Clonmel group.
It is often said that the most important thing any shed does is “put the kettle on”. That in itself often acts as the catalyst for so much positivity in exchange, and of course, working shoulder-to- shoulder - which unfortunately cannot happen at present - gives an immeasurable lift and sense of purpose to the lives of the members.
LENDING A HAND
Since it’s foundation when four members - Joe O’Sullivan, Joe McCormack, Tom Fennessey and Tony Marriott - came together, the Clonmel Shed has lent the proverbial hand to numerous projects throughout the locality.
Guided by the superb wood craftsmanship of Chris Collins, the Shed has made numerous “buddy benches” for schools, helped the Tidy Towns group with planter boxes, etc., supported the C-Saw Service initiative at the peaceful little park at Toberaheena by providing a beautiful bench and bird feeders, and they have also made booths for the Rotary Club, including the Remembrance Tree booth seen annually in O’Connell Street at Christmas time. These are just a small sample of the many worthy projects undertaken by the group since it was formed.
Keith also fondly recalled the late Frank O’Donoghue and the late Martin Behan, who both did Trojan work for Clonmel Tidy Towns, as great friends of the Clonmel Men’s Shed, prior to their all-too-early deaths.
“However, I wouldn’t like people to think you have to be a tradesman or skilled with tools to join us here,” added Keith.
“I like to think of this place as being like the lunch break at work or the tea break in the canteen when colleagues just mix together. It is mostly a social grouping. And while we have done a few things out there in the community, it wasn’t serious in intensity or anything like that. It didn’t take over and we didn’t have a production line going on. For the most part this is a light-hearted coming together of like-minded people,” he added.
PRIMARILY A FORUM
“The Men’s Shed primarily is a forum for people because that’s what it’s for, it’s not for anything else,” Keith pointed out. 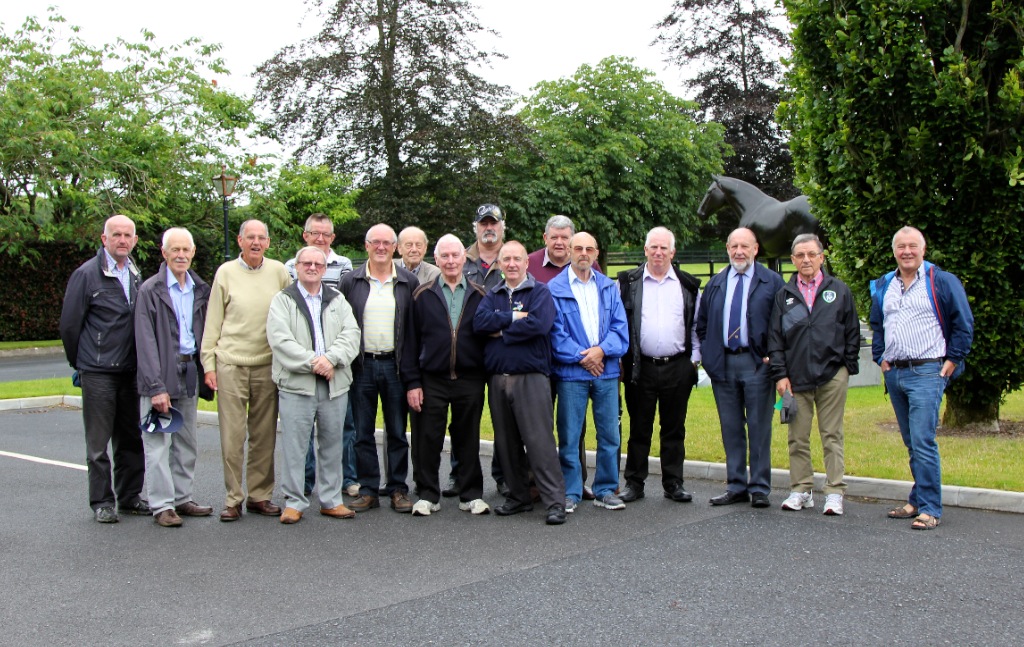 “But there’s the other side to the Men’s Shed also and we do various lighter things from time to time. We visited Coolmore Stud as a group, some members also went to the Dáil (Éireann) to see its workings, and we would have speakers come on occasion to us, and we would go and talk to others also from time to time, things like that,” added Keith.
But, for now as 2022 emerges, like the rest of the world the Clonmel Men’s Shed Association is no different than everyone else. For now they long for things to return to some semblance of normality to enable them to come together safely, shoulder-to-shoulder once more, to help each other and when possible to assist others in that process, if they can. And when that day arrives they will be more than happy to see some new members make their way over to the Coleville Road and they will hopefully, once again, get to “put the kettle on”.