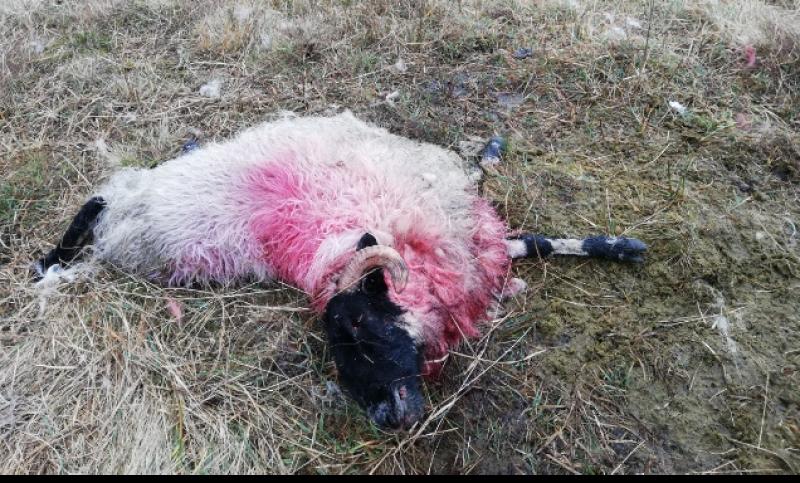 Dog owners have been urged to keep their pets under control at all times and not to walk them in Tipperary’s hills and mountains in the wake of the shocking slaughter of 30 sheep in the Knockmealdowns near Newcastle village.
The appeal has come from a farming couple who lost 20 ewes in the dog attack on Knockmeal Mountain at Crohane, Newcastle the week before Christmas and Mountaineering Ireland, the representative body for hill walkers and climbers.
The sheep kill was discovered on Thursday, December 16 and reported the same day to Cahir Garda Station. Gardaí at Dungarvan Garda Station are investigating the incident.
Anyone with information in relation to the dog responsible for this sheep kill is urged to contact Dungarvan Garda Station at (058) 48600.
Farmer Stephen Ryan from Kings Yard, Knocknagalty, Kilbehenny said 20 of his ewes were killed and two more injured while another sheep farmer lost 10 sheep.
He said he brought the sheep to his outfarm in the Knockmeal area just a few days before they were attacked.
He recalls the distressing scene he witnessed when he checked on his herd on December 16.
“I noticed one ewe was bleeding around the throat and then saw another attacked around the throat was dead. I knew straight away I was in trouble. I followed the path and found more dead sheep. It was sickening.”
He did notice a stray dog around his outfarm the day after he discovered the sheep kill and has reported this sighting to gardaí.
Mr Ryan said the ewes he lost were between two and a half and three years old and would have been due to lamb this spring. They were worth an estimated €3,200.
In view of the devastating attack on his flock, Stephen and his wife Bridget King have appealed to the public not to walk dogs in mountain areas. They have seen how hikers bring dogs up to the mountains on leads and then leave them off to run around the mountainside.
“If people want to go up the hills, leave their dogs at home. The only dogs that should be allowed on the mountains are mountain rescue dogs and sheep dogs,” said Stephen.
Bridget said the incidence of people leaving dogs off leads to run in the mountains has increased since the start of the Covid-19 pandemic.
She pointed out there are many forest tracks and looped walks away from livestock where people can take their dogs for walks.
“This is an animal welfare issue; many people do not realise the suffering their dog can cause to sheep and also to wildlife,” she said.
“It happens so quickly and easily. Sheep will run from a dog and the dog gives chase. That’s enough to cause harm to the sheep, which may die from the stress or from injuries caused. Some also get caught in briars or wire.”
Mountaineering Ireland has echoed the farming couple’s appeal.
“The failure of a minority of dog owners to keep their dogs under control means that dogs are not welcome in most upland areas,” said a Mountaineering Ireland spokesperson.