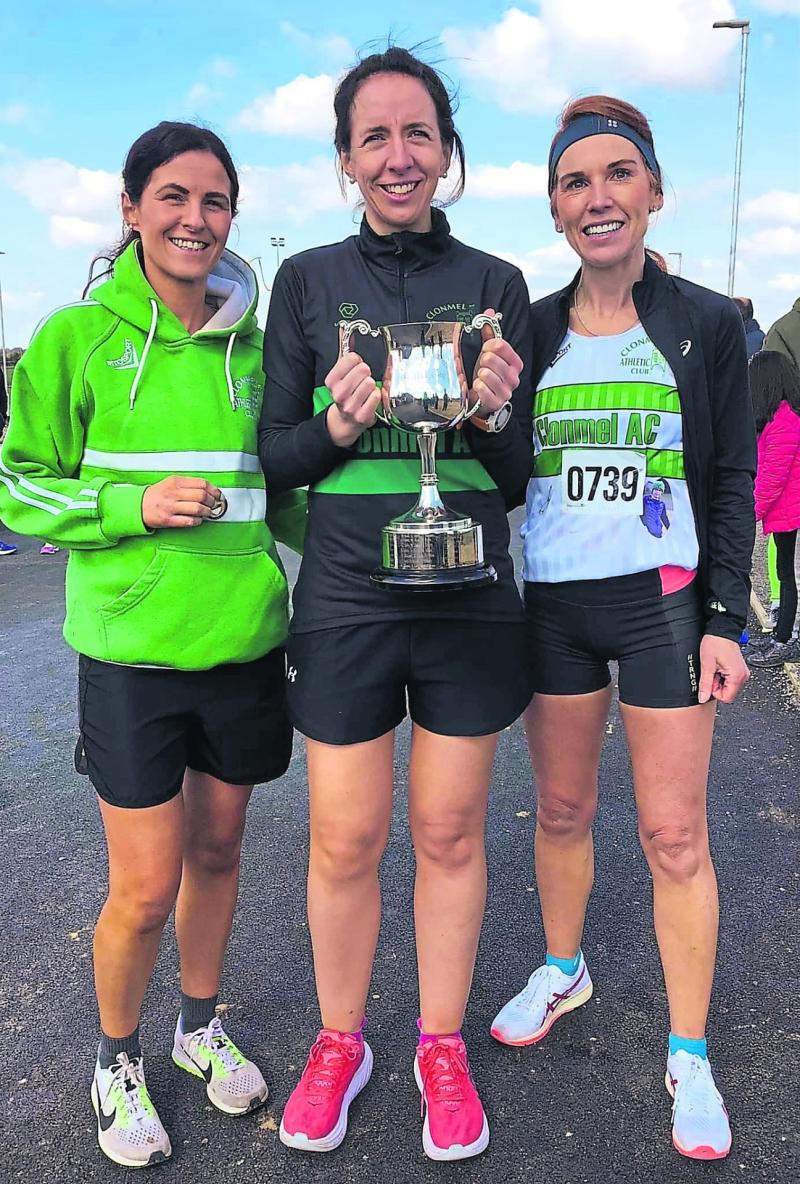 County titles for Aisling English and Peter Madden as they lead their Club teams to glory
Fethard town park was the venue for this year’s County Novice B Road Championships last Sunday.

The venue was spectacular and top class, excellent credit to all involved. Warm weather greeted everyone as they assembled in the carpark, and we were treated to two great races.

In the Ladies 3k race the pace was fast from the start with Lisa Quinlan of Moyne going to the front right from the start of the two-lap race and she set a strong pace that soon had the field well spread out. Going out on the last lap she was still leading the race with Aisling English of Clonmel hot on her heels and Aisling Maher of Moyne in 3rd place.

Then at around 2k Aisling English moved into the lead and soon opened a small gap on Lisa. As they turned at the top of the course Aisling increased the pace and made every stride a winning one when crossing the finish line in 11 mins 38 secs, to win her first County title impressively.

Lisa kept the pace going all the way to win the silver medal very convincingly in 11 mins 48 secs. The battle for the bronze medal changed on the final lap as Michelle Doherty of Clonmel came through very strongly and moved into 3rd place inside the final 400m to win the bronze medal in 12 mins 11 secs, just ahead of Aisling Maher of Moyne who was 4th in 12 mins 18 secs with Laura McCarthy Armstrong 6th in 12 mins 22 secs, brilliant performances all round. The battle for the team honours was very close and it was only decided inside the last 100m.

In the end Clonmel were the winners and retained the Cup for another year with their team of Aisling English, Michelle Doherty and Annemarie Looby on 11 points. The Moyne team of Lisa Quinlan, Aisling Maher and Edel Delaney won the silver medals on 12 points.

The men’s race over four laps was also very competitive. Here, the early pace was set by Eugene O Keeffe of Carrick on Suir and after about 400m the chasing pack of six athletes included Keith Fraher of Carrick on Suir, Liam Shanahan of Thurles Crokes, Cormac Healy of Clonmel, Willie O Donoghue of Mooreabbey Milers and the Templemore duo of Michael Carey and the eventual Champion Peter Madden.

With three laps to go the order was the same, then midway through this lap Keith Fraher went to the front and injected some fast pace that soon saw the chasing pack down to three athletes, Madden, Healy and Shanahan.

At around 4k the leading group was now three with Madden, Healy and Shanahan sharing the pace and they were still together going out on the final lap, the medals belonged to this group with all three athletes running strongly.

Then at 5k Peter Madden made his winning move when surging clear and had a good lead with 600m to go. He maintained that strong pace all the way to the finishing line to win the title very impressively in 21 mins 7 secs. Peter joins an elite group of Templemore athletes as the winner of this title previously won by Johnny Doran in 2005 and Glen Austin in 2015.

This was their second time winning this club title having previously won it in 2019. This was a great victory by Peter who had been 3rd in this race for the last two previous Championships, so congrats Peter on this great win.

The battle for the silver medal was only decided, inside the final 20m with Cormac Healy edging out Liam Shanahan very close to the line in 21 mins 15 secs with Liam winning the bronze medal in 21 mins 15 secs. For the record Willie O Donoghue of Mooreabbey Milers was 4th with Keith Fraher of Carrick on Suir 5th and Michael Carey of Templemore 6th.

With two athletes in the top 6 Templemore were convincing winners of the Inter Club title with their 3rd score Paudie Meehan finishing 9th. The silver medals were won by the Thurles Crokes team of Liam Shanahan, Paul Dolan 8th and Shane Dorney 13th on 24 points.

Then we had Clonmel edging out Mooreabbey Milers by just two points to win the bronze medals on 28 points. Their scoring team was Cormac Healy, Brendan Walsh 11th and Barry Horgan 15th. At the presentation of the Awards, the County Chairman, Owen Fanning thanks the Fethard club for organising the fabulous facilities for two great races and the venue is a credit to the local community.