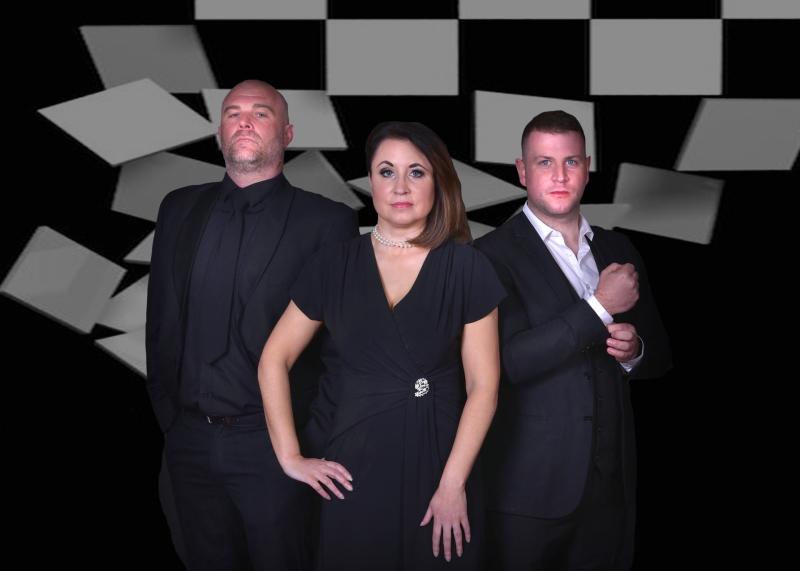 Tickets go on sale on Tuesday, May 3 for Carrick-on-Suir Musical Society’s annual musical – Chess – which will be staged at the Strand Theatre from Tuesday, May 17 to Saturday, May 21.
Ticket booking opens online at 9am that day for the much anticipated show. Demand for tickets is expected to be high as this will be the Society’s first major musical production in two years.
Carrick-on-Suir Musical Society’s cast of singers, dancers and actors are rehearsing four to five days a week at the moment in preparation for the opening night.
The society’s production of Chess – The Musical is being directed by Martin McNelis. Fergal Carroll is the musical director, Edel Quinlan is the choreographer and Eamon O’Malley is chorus master.
The show set at a Cold War era chess tournament stars Emmet Dornan and Michael Raggett as Frederick Trumper and Anatoly Sergievsky, US and Soviet chess grandmasters and rivals.
Sandra Power plays Trumper’s lover Florence Vassy, while Louise Russell will take to the stage as the Russian chess player’s wife Svetlana Sergievsky.
Filling the role of Walter De Courcey, who represents Trumper’s sponsor is Seamus Power while Neill Bourke plays Anatoly Sergievsky’s chess assistant Alexander Molokov. Tarryn Attlee plays the Arbiter, who is president of the International Chess Federation.
Carrick-on-Suir Musical Society PRO Caolan Deehy-Power said the show has an overall cast of more than 30 performers including a pop choir and ballet dancers from the Waterford School of Ballet run by the show’s choreographer Edel Quinlan
You can purchase tickets for the show online through the website link: www.ticketsource.eu/
strandtheatre.
Tickets can also be purchased at the Strand Theatre’s box office open on Mondays and Tuesdays from 4pm to 6pm and Wednesdays to Saturdays from 11pm to 1pm. The box office phone number is (051) 645050.