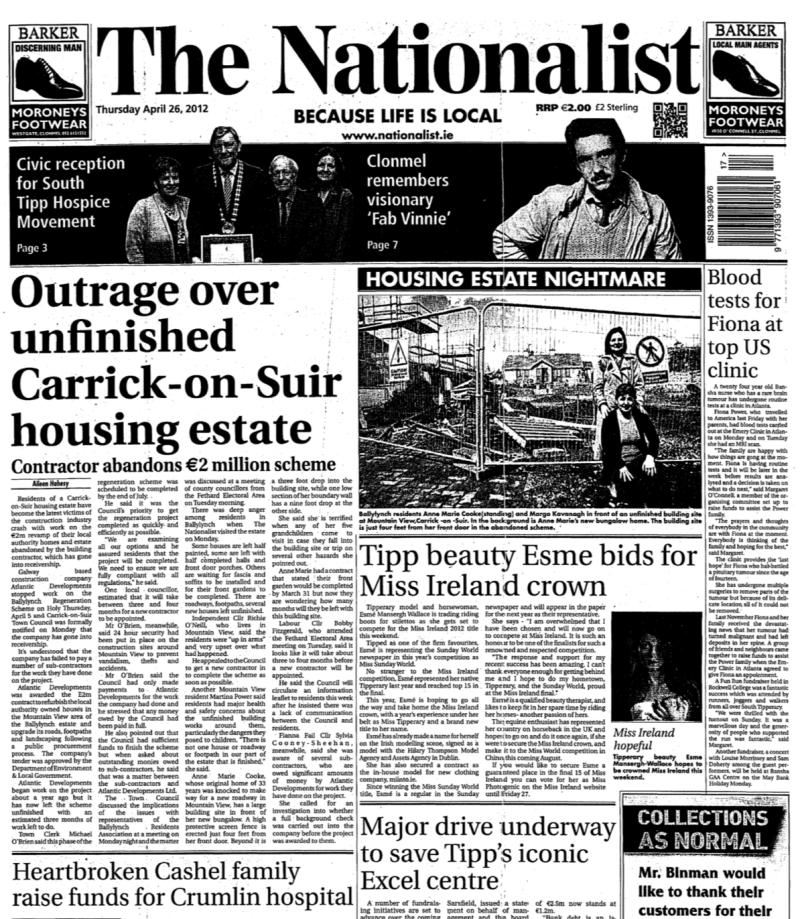 Ten years ago this week on April 26, 2012, we led on the front page with a story headlined “Outrage over unfinished Carrick-on-Suir housing estate”.
According to Aileen Hahesy’s report, residents there had become the latest victims of the construction industry crash with work on the €2 million revamp of their local authority homes and estate abandoned by the building contractor, who had gone into receivership.
A Galway-based construction company stopped work on the Ballylynch Regeneration Scheme on Holy Thursday, and Carrick-on-Suir Town Council was formally notified later that the company had gone into receivership.
Elsewhere on the front page that week we reported that a major drive was underway in Tipperary Town to save the Excel Centre. A number of fundraising initiatives were in the pipeline in a bid to ensure that the town’s iconic centre, one of the county’s most valuable assets in the promotion of arts, culture and heritage, would remain open for business for many years to come.
Also that week, Tipperary model and horse woman, Esme Mansergh-Wallace was all set to compete for the Miss Ireland 2012 title in April. One of the favourites, Esme was representing the Sunday World newspaper as “Miss Sunday World”.

In another story, Aileen Hahesy wrote about a heartbroken Cashel woman and her husband who had channelled their pain and sorrow into raising much-needed funds for the national children’s hospital where their new-born son was cared for before his death the previous January. Mary Prior (née Gleeson) and her husband John organised a major fundraiser in aid of Our Lady’s Hospital in Crumlin at the Naval Base in Haulbowline in memory of their son Ciarán. Over €20,000 was raised at the event.