Over the past 30 years or so, Tipperary sheep farmers Michael and David Coyne have suffered at least 10 big sheep kills and it can be very traumatic for farmers to witness

For the second time in just over four months a major sheep kill has taken place on the Knockmealdown Mountains, this time resulting in the savage deaths of 27 animals.
On Monday night, April 25, sheep farmers Michael and David Coyne, who farm at Boolahalla, Newcastle, endured the horror of seeing their flock savaged by an Alsatian dog on the Knockmealdown Commonage.
The following evening the same dog once again returned to the commonage over Newcastle and on that occasion, while again chasing vulnerable sheep, the dog was immediately shot dead.
For now at least there’s some relief for the long-suffering Knockmealdown sheep farmers with this beast out of the way, but experience has taught them the hard way that episodes like this are unfortunately a fact of life which could easily be alleviated if the general dog-owning population was more mindful.
Late last year, a further 30 sheep were savaged by the same dog in the Knockmealdowns near Newcastle when another local farmer, Stephen Ryan from Kings Yard, Knocknagalty, Kilbehenny, lost 20 of his ewes on December 16.
“What’s happening with these savage dogs being allowed to roam at will and kill sheep simply for fun cannot be allowed to continue,” said Michael Coyne, who together with his brother have been sheep farming all their lives on the Knockmealdowns, as did their father before them.
“The dog who did the killing this time was the same dog who killed Stephen Ryan’s sheep. If savage dogs are allowed to, they will return to kill time and time again,” said an aggrieved Michael who put his loss as a result of last week’s carnage at approximately €4,000 in monetary terms. However, there are other personal costs that are immeasurable to any farmer who witnesses the animals that he lovingly cares for being savaged to death like this. 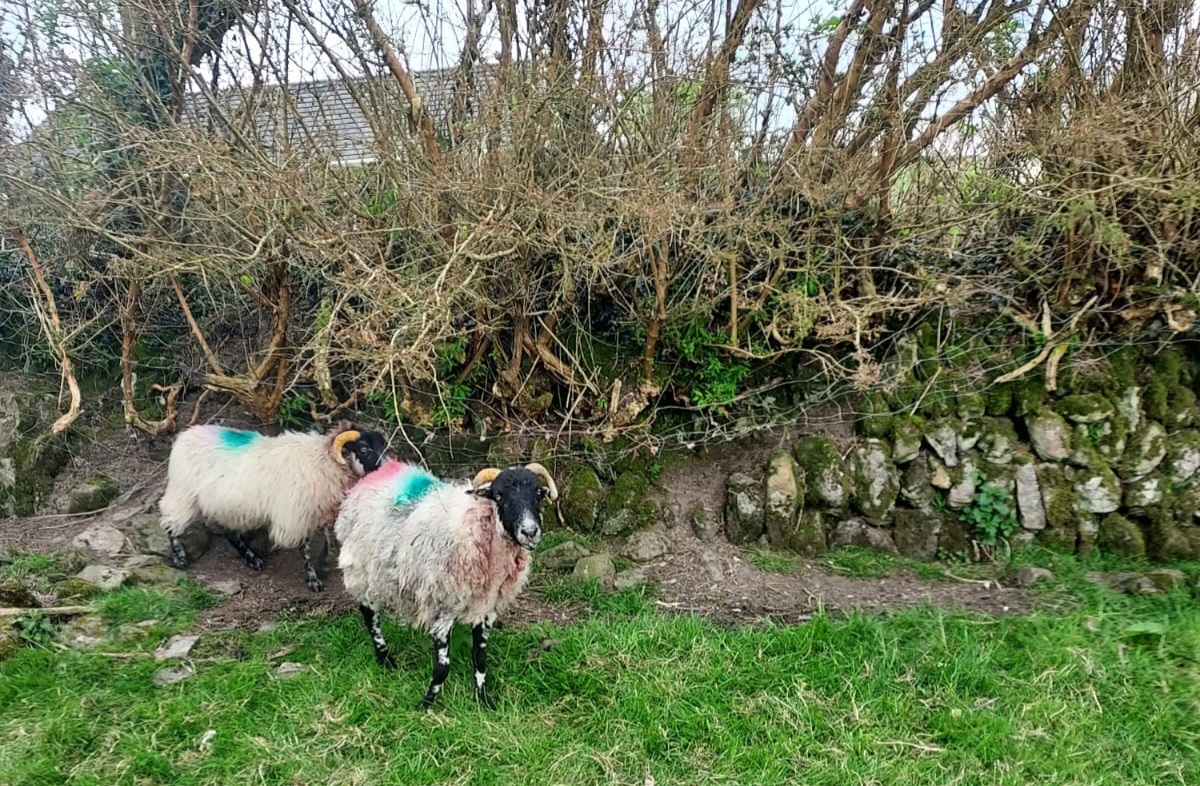 These badly traumatized sheep survived the recent attack from the savage Alsatian dog.

“It’s very difficult for sheep farmers to protect their flocks when savage dogs, many often unchipped, can wander the commonage and kill harmless animals. Over the past 30 years or so we have suffered at least 10 big sheep kills and it can be very traumatic for a farmer to witness,” added Michael.
“Some of these dogs are local dogs who wouldn’t be kept safely at night time by careless owners, but oftentimes dogs are also left on the Knockmealdowns by visitors. It sometimes happens that people bring their dogs for walks on the hills and when the dogs get lost the owners themselves just walk away, that too can end with the horrible stressful killing of sheep and young lambs,” added David.
On behalf of all the farmers who tend their animals on the Knockmealdowns and other mountain ranges, Michael appealed once to the public not to walk dogs in mountain areas. By all means walk on the hills but leave the dogs at home, he asked.