Incredible - in this week's Nationalist 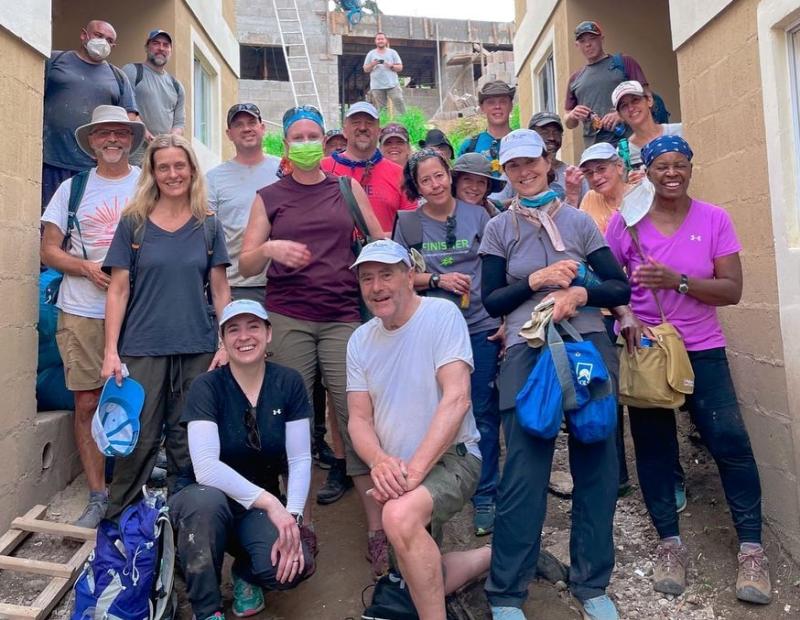 Cappawhite man, Paul Grisewood, has recently returned from El Salvador where he participated in a house building programme for the very poor of New Cuscatlan.

Paul joined up with The Fuller Centre for Housing, a sister organisation of Habitat For Humanity, for the construction programme and was the only non-American in a group of 25 participants.

The Fuller Center for Housing is a non-profit organisation that seeks to eradicate poverty housing by promoting partnerships with individuals and community groups to build and rehabilitate homes for people in need.

Since launching in 2005, The Fuller Centre has spanned the globe and now has covenant partners in more than 70 US communities and 20 countries.

One of their largest project sites is in El Salvador where they are building communities that move families out of slums and unstable conditions into homes with solid walls, a dry roof, clean water, a kitchen, electricity and flush toilets.

The partner families in El Salvador typically come from disease-rampant living environments where the makeshift homes are made of mud, plastic, and rusty metal situated on land they do not own, with very basic sanitation facilities, if any.

After the houses are built the partner families will truly own it once they pay it forward using a no-profit, no-interest loan.
It creates an astonishing change in the direction of the lives of the families and, especially, their children.

The families become not just recipients, but donors as they work alongside the volunteers and builders and repay the costs of construction.

Paul Grisewood says that to date the organisation has completed well over 300 homes in the creation of six communities, with another 160 homes currently underway.

“Before we got down to work we visited a community of homes built six years ago to see how they have progressed and it now is a beautiful and peaceful place.

"Everyone that can works now and the grannies mind the children while the mothers are at work. We learn so much each day about the movement behind this amazing build. About 150 houses are being built with land donated by the Government and the Fuller Centre and the People Helping People Network looks after the development and recruitment of families.”

This Network also contributes a wide range of community support from nutrition assistance to dental work to some types of medical care. They have also helped families access job training or start niche small businesses. With the home as the central pillar of this comprehensive approach, they are destroying the allure of gangs that has overtaken too much of this beautiful nation.

On the same site that Paul was working on there were 75 inmates who were serving in the construction of the homes, in which they learn skills as they contribute to a better world and earn earlier release. Paul speaks of a visit to a lady named Gabriella.

“We visited Gabriella who lives almost on top of the mountain. It took us a good effort to climb up there and when we arrived we found out she has two daughters and a son. One daughter is in a wheelchair and her mother continually pulls her up and down the 80 or 90 steps to her home. She deserves a suitable home and we are thrilled that she will move in next month.”

The last day on the site started with a four hour thunderstorm which led to roads being flooded so rain gear was essential for the team. Paul takes up the story again:

“After the rain most of the work was inside and when we finished work we had some fun playing games with the children of the existing 30 homeowners. Then we moved up to dedicate a home to Anna who has been waiting 17 years for her own home.

"She cried with emotion as she told of her struggle for years and years with trying to pay rent and often with no food on the table. She never gave up hope and said that a miracle happened when she heard about this programme and was accepted. Next month she moves in with her 84 year mother, her daughter and granddaughter.

"She was so excited and so thankful. It filled our hearts with pride and emotion. We finished the day with a nice meal. A great programme filled with non stop work and laughter in the company of a fantastic team.”

Paul is no stranger to this type of voluntary housing work as he has participated in builds in Thailand and Vietnam and has also led three teams to the Philippines. Congratulations to him on this fantastic work and to his latest one in El Salvador.