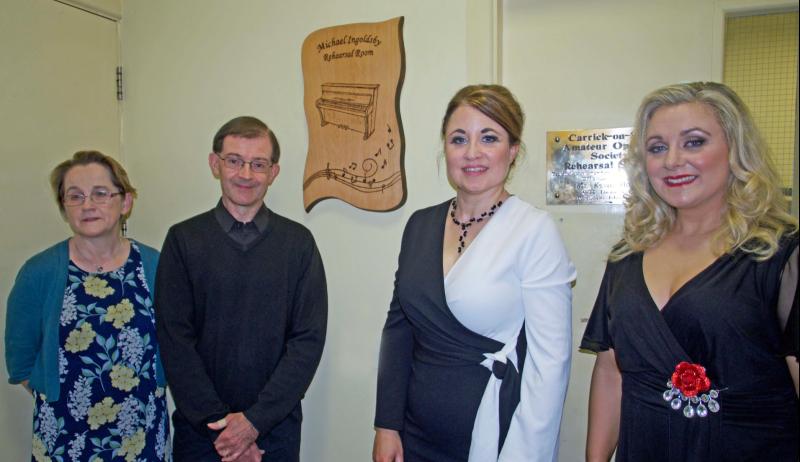 Carrick-on-Suir Musical Society has named the Strand Theatre’s rehearsal room after its renowned former chorus master, pianist and musical director, the late Michael Ingoldsby, who passed away two years ago during the first Covid-19 lockdown.
A name plaque for the Michael Ingoldsby Rehearsal Room was unveiled after the opening night performance of the Musical Society’s annual show, Chess, last Tuesday, May 17.
Musical Society chairperson Sandra Power said the show’s opening night was dedicated to all its members and past members, particularly Michael, who was chorus master for 60 of the Society’s productions over a period of four decades.
The gifted Dublin-born musician passed away on May 11, 2020 .
Sandra said the Musical Society commissioned the commemorative wooden name plaque honouring Michael shortly after his death, little thinking it would be so long before they could erect and officially unveil it at the Strand Theatre.
Michael Ingoldsby’s daughter Marion and son Gerard were present at the unveiling of the plaque made by Gerdy Power from Clonea-Power and inscribed with their father’s name and musical notations.
Sandra paid tribute to Michael’s dedication and hard work for Carrick-on-Suir Musical Society for so many years at the plaque unveiling ceremony.
She told The Nationalist, it was fitting that the theatre’s rehearsal room was named after Michael during their production of Chess as he was chorus master of the Society’s first production of the show in 1994, which was also the Irish amateur stage premiere.
“It was lovely that it was Chess as that (first production) won so many awards for the Society and he was so proud of it.”
That 1994 production of Chess was also the first Carrick Musical Society Show Sandra performed in as a member of the chorus and it was the first time she met and worked with Michael Ingoldsby.
The tribute former Association of Irish Musical Societies president Seamus Power wrote following Michael’s death two years ago recounted that his involvement with Carrick-on-Suir Musical Society began in 1957, shortly after moving to the town with his wife Anne to work as a social welfare officer.
He was rehearsal pianist for The Belle of New York show that year and joined the orchestra as a pianist in 1959 before becoming the Society’s chorus master.
Seamus recalled how Michael performed his role as chorus master with “tremendous dedication and a great deal of patience” every year and was nominated for awards on two occasions by AIMS.
Michael was also the Society’s musical director on a number of occasions in the 1970s. His final and 60th production as chorus master was The Pirates of Penzance in 2002. He was made an honorary life vice-president of Carrick Musical Society in 1996 along with his great friend and show producer, the late Dick Meany, who the Strand Theatre’s auditorium is named after.
Seamus said Michael and Dick helped Carrick Musical Society achieve many awards, including the Ballyclare Rose Bowl at the 1989 AIMS Choral Festival, Best Overall Show award at the Waterford International Festival of Light Opera in 1994 with Chess and in 1997 with Me and My Girl. They also helped the Society win its first AIMS Best Overall Show award in 1978 for Joseph and The Amazing Technicolour Dreamcoat.