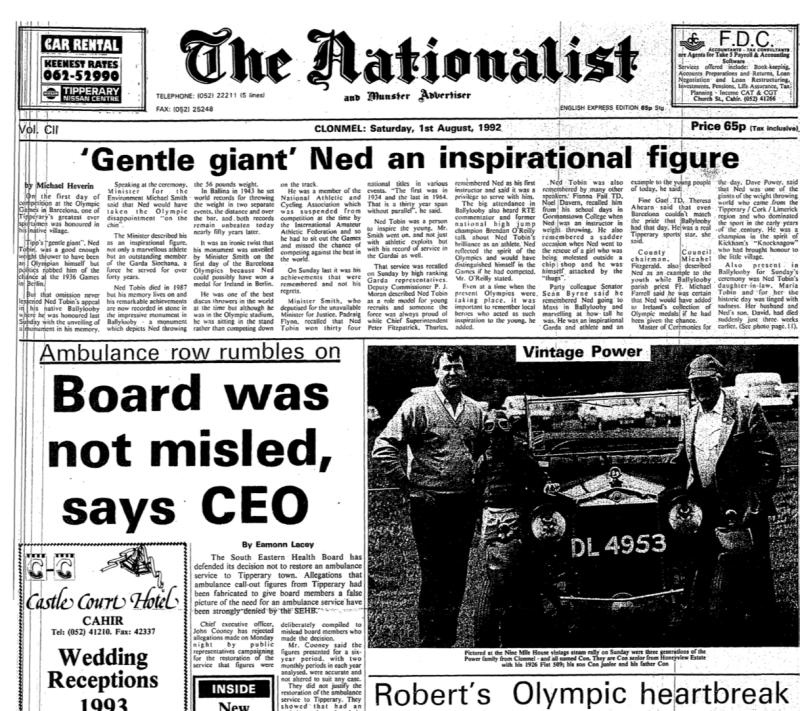 The South Eastern Health Board defended its decision not to restore an ambulance service to Tipperary Town, wrote Eamon Lacey on the front page lead story in The Nationalist, dated August 1, 1992.
Allegations that ambulance call-out figures from Tipperary had been fabricated to give board members a false picture of the need for an ambulance service were strongly denied by the South Eastern Health Board.
CEO John Cooney rejected allegations by public representatives campaigning for the restoration of the service that figures were deliberately compiled to mislead board members who had made the decision.
The decision of the health board not to restore the service for the second time was fiercely condemned in Tipperary Town. Deputy Michael Ferris accused the SEHB of deliberately compiling the figures presented to the board members who had to decide the issue and Cllr Christy Kinahan accused the board of a “complete fraud” at the previous UDC meeting in Tipperary.

YESTERYEARS: Plane emergency landing in a field in Tipperary

One of Tipperary’s chances of Olympic glory in 1992 disappeared that week as Cidona Carrick Wheelers cyclist Robert Power was injured in a traffic accident in Spain and would be unable to continue in competition in the Barcelona Games.
The 21-year-old Dungarvan man broke his collarbone in a collision with a car while on a training cycle. He was rushed to hospital and later transferred to the Olympic Village hospital.

He had earlier that week competed in the 100km team time trial event at the 1992 Olympic Games.

There was good news on the employment front in August 1992 when it was announced that a £4 million tannery project near Carrick-on-Suir had been given planning permission.