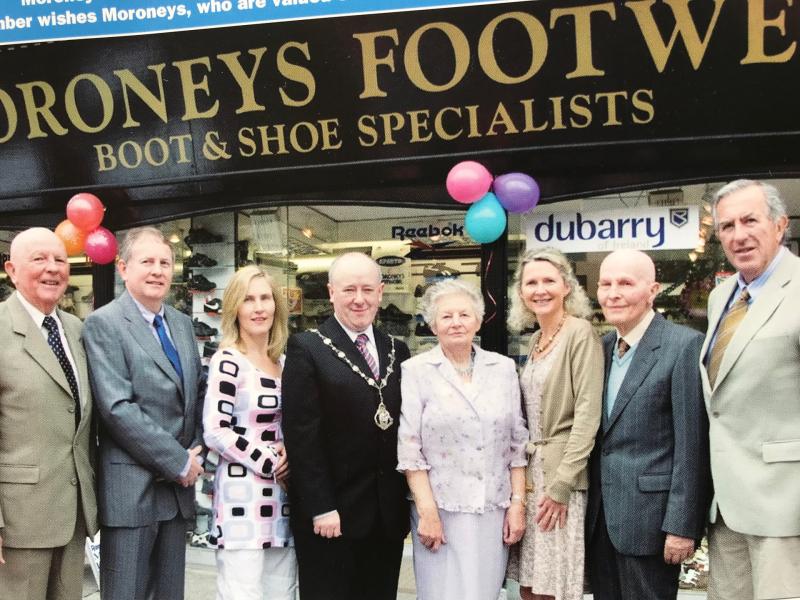 PICTURED ABOVE: The late Thomas Moroney (second from the right) at a special occasion for the Clonmel family business, its 100th anniversary in 2008. Included are his brother Con; Conor Junior; Marie Moroney; Mayor Richie Molloy, Eileen Moroney, Michelle Boisson and Frank O’Donoghue.

The death has occurred at the age of 99 of a member of one of Clonmel’s best known business families.

And while Thomas worked in the family business for a short while during his teenage years, his lifepath took a different turn following the arrival of a telegram to his father one fateful morning.

As a result, Thomas spent a lifetime in farming in county Clare, a county that the Moroney family has close links to. He was a highly respected and progressive farmer in his adopted county up to the time he opted out of the business in his late seventies.

After his education in the CBS High School, Thomas went into the family footwear business run by his father, Cornelius, a native of Clare, and his mother Ellen, from Newcastlewest in county Limerick.

They had taken over the business from Cornelius’s cousin, CJ Moroney, who founded the firm that has now spanned generations.

One morning when Thomas and Con and their parents were preparing for a trip to Clonea beach outside Dungarvan, where the family had a bungalow, they received a telegram from Cornelius’s aunt, Anne Naughton in Knockdonagh, County Clare, not far from Limerick city.

Anne’s telegram informed the family that her husband, Tom, had died and instead of a day out in Clonea, the family headed to Clare.

And that’s when Thomas’s new life choice was made.

He was asked to remain on to help out with the farm, and with his parents’ approval, he did so. He never returned to Clonmel on a permanent basis.

He inherited the farm on Anne’s death and went on to marry and raise his family in Knockdonagh.
As his younger brother Con recalls – “That telegram changed his life”.

Thomas met his future wife, Nora, who was from Limerick and they had two sons, John and Anthony, all three of whom predeceased Thomas, and a daughter Anne. He was also predeceased by his sister Teresa.

Despite coming from a non-farming background, Thomas took to his new career in great style. He extended the farm over time and is understood to have been the first farmer to build a silage pit in county Clare.

One on occasion when he had a problem with too much moisture in one of his meadows, he found a novel solution with a link to his home town.

At one time Clonmel Corporation had been replacing the footpaths outside the family business on O’Connell Street and the original flagstones on the path were being discarded.

Cornelius and his son Con had held on to them in the belief that they might be useful at some stage. And they were.

They were brought down to Thomas’s farm and laid out in the meadow, covered again with soil and made a drainage to the nearby river.

And so Thomas had a little bit of his home town on his new farm.

Thomas’s wife Nora died 16 years ago and two years later he moved to Dublin to live with his daughter Anne in Cabinteely.

Anne, his brother Con, sister-in-law Eileen, his grandchildren Geoff, John and Alex, and their wives Paloma and Liana, and especially his darling great grandson and namesake Tommy, his nieces, nephews, extended family, relatives and friends.