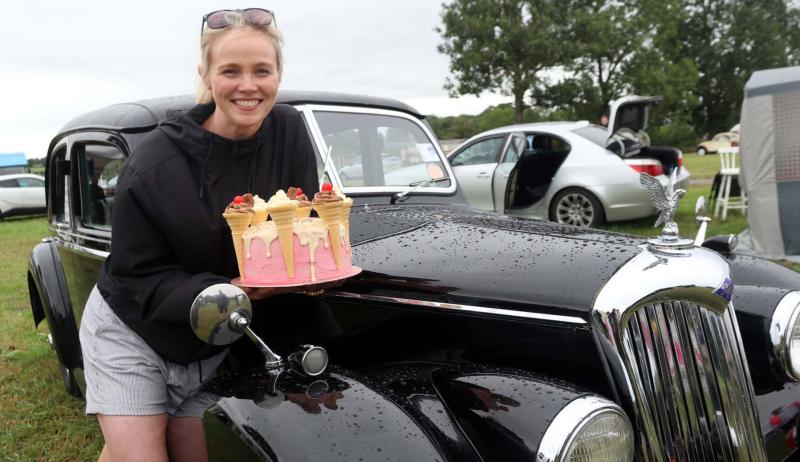 Zara Moynan, who won the Best Novelty Cake of the Show at North Tipperary Agricultural Show in Nenagh, stands beside a 1948 Classic Riley Car owned by her father Olive Moynan

Back with a bang was how North Tipperary Agricultural Show chairman Brendan Murphy described the return of the popular bank holiday event after a three-year absence.

Despite an almost constant drizzle, thousands packed into the Showgrounds on the Borrisokane road on bank holiday Monday and they stayed around.

“There was a great atmosphere,” said Brendan, pointing to the all-day entertainment from the likes of up-and-coming country star Ashling Rafferty to the solidly old favourites Nenagh Ormond Brass Band - who gave a somewhat ironic version of The Kinks' Lazing on a Sunny Afternoon despite a heavy drizzle falling - Nenagh’s Bubba Shakespeare and Rev 20 as a factor in keeping everybody happy throughout the day.

“There was something for everyone,” he said, including the Nenagh Class Car display, which had over 300 classic and vintage cars on display.

There was also plenty for the agriculture sector, with stands from the IFA, Arrabawn and Agri-Aware, among others.

Brendan said that the support they got showed that there was an appetite for the show, with both the car park on-site and the overflow car park at Linds’ field full.

“When you get the attendance like that, it is very encouraging,” he said.

The community section drew huge interest with many community groups, including Tipperary Search and Rescue, Tipperary Men’s Shed, the Irish Coast Guard and even the Ormond Historical Society taking up the opportunity of taking a free stand at the show to get their message out to the public.

Despite the Galway Races finishing the previous week and the era of the FF "tint" lost in the mists of time, local TD Jackie Cahill, had his tent at the show, drawing a mixed crowd from local supporters to Tipperary County Council Cathaoirleach Cllr Roger Kennedy, Cllr Joe Hannigan, IFA president Tim Cullinan and party faithful.

Rising Fianna Fáil star Ryan O'Meara, who is hotly tipped to take a seat at the next local elections, was doing a great meet and greet.

While entries were back a little in some sections, especially arts and crafts where Brendan pointed out that, sadly, they had lost many of their regulars due to Covid over the past two years, other sections were on a par with previous years.

“The horse and hunter class sections were happy with the level of entry,” he said, and the dog show attracted huge entries in all categories.

However, there was no showjumping ring due in a large part to obtaining insurance.

The problem issue meant there was no bouncy castle for the kiddies, though younger show attendees did enjoy the Laser World attraction.

Nenagh Classic Car Club put on their usual great display with over 300 vehicles on display, including a Cadillac that one belonged to the King himself, Elvis Presley.

No doubt next year the show organisers will be hoping that, once again, Covid has left the building.